Mother's Day Menu and A "Pick Me Up" 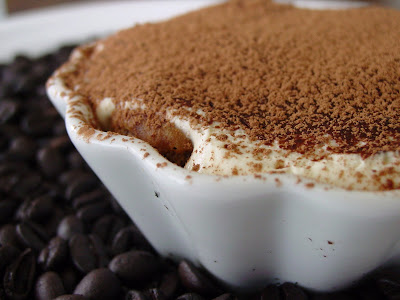 I thought I'd share with you my Mother's Day table and a dessert I made before another week passes by and I forget. 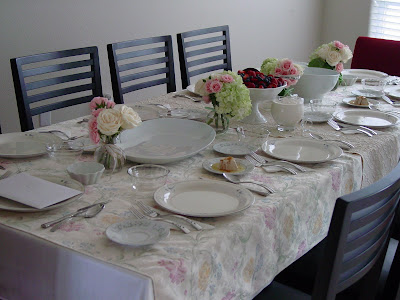 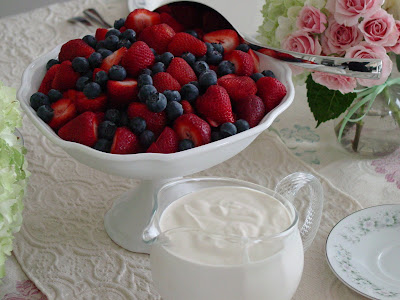 I've eaten my fair share of tiramisu over the years, but I've never made my own. I think I was intimidated by having to make the zabaglione cream, though I'm not sure why. I think it's the extra time it takes to make and the dishes to clean up. I'm lazy sometimes :-)

I was originally going to make a blueberry cake, but decided to make this tiramisu instead since it seemed brunch-y and it's not too sweet. That and because about 6 months ago I bought two packages of Alessi Savoiardi lady fingers and they were taking up prime real estate in my pantry. And it just so happened that my mom was looking through a cookbook and pointed out a recipe for tiramisu. Little did she know I was already making it! 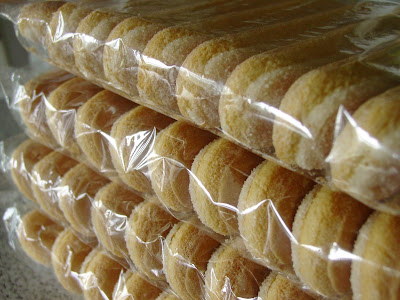 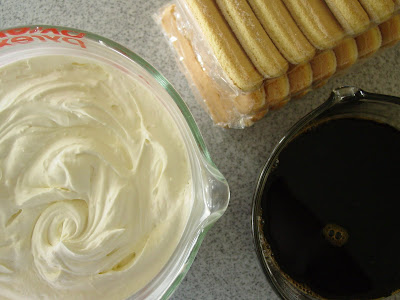 I turned to the folks at Cook's Illustrated because they haven't failed me yet. Their recipes are tried and true and their directions are precise. I found this recipe in their current magazine. What I liked about this recipe is that you didn't have to cook anything. It does contain raw egg yolks, but I ain't skerd. Are you? This recipe also calls for Dark Rum instead of Marsala wine (which I didn't have) or Brandy. You can use any of the three alcohols.

I had 4 lady fingers that wouldn't fit in my casserole dish so I made two single-serve portions and my hubby and I ate them for dessert the following day. It was delicious! 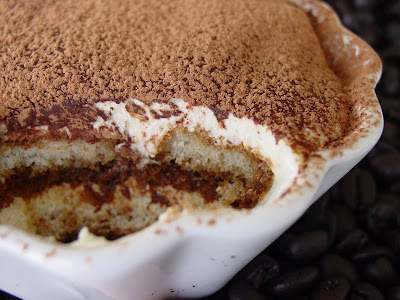 In now-empty mixer bowl (no need to clean bowl), beat cream at medium speed until frothy, 1 to 1 1/2 minutes. Increase speed to high and continue to beat until cream holds stiff peaks, 1 to 2 minutes longer. Using rubber spatula, fold one-third of whipped cream into mascarpone mixture to lighten, then gently fold in remaining whipped cream until no white streaks remain. Set mascarpone mixture aside.

Working one at a time, drop half of ladyfingers into coffee mixture, roll, remove, and transfer to 13 by 9-inch glass or ceramic baking dish. (Do not submerge ladyfingers in coffee mixture; entire process should take no longer than 2 to 3 seconds for each cookie.) Arrange soaked cookies in single layer in baking dish, breaking or trimming ladyfingers as needed to fit neatly into dish.

Spread half of mascarpone mixture over ladyfingers; use rubber spatula to spread mixture to sides and into corners of dish and smooth surface. Place 2 tablespoons cocoa in fine-mesh strainer and dust cocoa over mascarpone.

Repeat dipping and arrangement of ladyfingers; spread remaining mascarpone mixture over ladyfingers and dust with remaining 1 1/2 tablespoons cocoa. Wipe edges of dish with dry paper towel. Cover with plastic wrap and refrigerate 6 to 24 hours. Sprinkle with grated chocolate or cocoa, if using; cut into pieces and serve chilled. 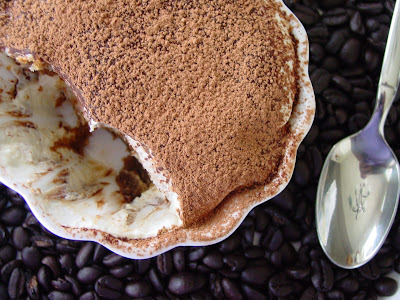 NOTE: You don't want to over soak your lady fingers or they'll be soggy. I turned mine a couple times in the coffee mixture and they were perfect. I did have about a cup of left over of the coffee mixture. You may use it all, but I didn't.

Also, you don't want to make this any more than 24 hours in advance because the lady fingers will get too soft and turn into a soggy mess. I prepared all the ingredients during the day, (the coffee mixture and the mascarpone cream) and refrigerated them. I assembled the tiramisu the night before and refrigerated for 14 hours before serving. 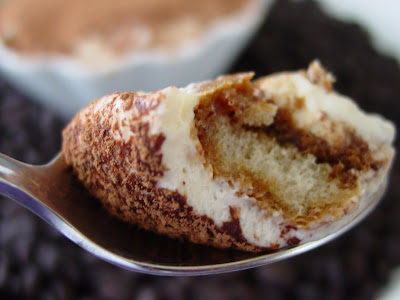 Yum, this looks so good. I just saw them make this yesterday morning on ATK!! Coingkidink!! (Okay, I really don't know how to spell that.)

What a pretty table!! Your photography is wonderful!!!!!

Love the table, those berries look SO good. But the dessert, even better!

Just bookmarked this! I love, love, LOVE tiramisu. Your pics are mouthwatering. :)

Everything looks great...I don't even know where to start. I'd probably start with that tiramisu!

The table looks so lovely especially with the flowers decoration.

OMG, absolutely gorgeous dining table. What lucky guests! Your tiramisu looks absolutely terrific, it sounds so tasty. I have never made at home before. As always you pulled it off beautifully!

seriously that has to be the best tiramisu I've seen in ages. there is no sogginess, no icky overwhipped cream--you nailed this one. CI never ever fails on the recipes. I can't believe how good that tiramisu looks, you have to see that one right? Nicely done sweetie.

That recipe for tiramisu is wonderful. I made tiramisu years ago and cannot find the recipe I used. This is close. It also used rum and not marsala. Since I have found your recipe I am going to make it again...Thank YOU!!!!

What a fabulous Mother's Day feast. That tiramisu looks delicious. You have me wanting to make my own zabaglione. Totally delicious!! Sorry that I've been a bad commenter for the past couple of weeks; I just finished law school exams and am just now getting to my google reader!

If you describe yourself as lazy in the kitchen, then I think all of the rest of us are in trouble.
Your pictures are sooooo beautiful, really they are. Very inspiring.
What a special brunch indeed!

What a lovely spread for Mother's day! The tiramisu looks fantastic!

What a beautiful table, and the menu looks amazing! So does the tiramisu :)

Your table looks so pretty, Monica! I love all the white.

Tiramisu is one of my very favorite desserts. It's also one of the first ones I learned to make though I haven't made a traditional one. I need to get some of those ladyfingers.

Btw, if I ever get to Texas I'm coming over with a list a mile long of all the yummy foods I want to make with you! And eat of course! Serious!
~ingrid

HI, this is amazing. I want to know what to use instead of the rum. Thanks!

Thank you! You can substitute marsala wine for the rum. If you want to make it alcohol free just omit it all together but you may need to use more espresso.