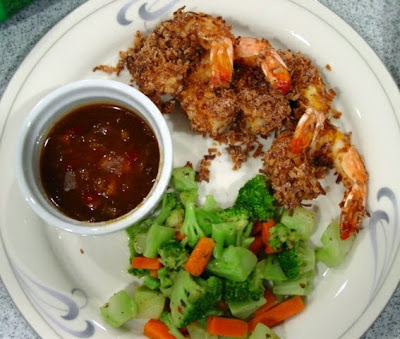 Recipe Made by Monica H at 2:39 PM No comments:

I like Starbucks. I don't like everything they serve, but I'm sure that's the same for most people and places. A few months ago, I stopped into Starbucks with my Mom and I got a slice of their chocolate cinnamon bread. It was divine! My MIL laughs at me when I use that word, but it was. Since it was a seasonal recipe, they don't carry it all the time. I was searching through some blogs and came across the recipe from the chef who created it- Marcus Samuelsson. I was excited to make it and tried it out for Christmas. It was good and my family loved it, but it's not quite like I remember it in the coffee shop. If you like dark chocolate and cinnamon- then it's perfect. It reminds me of Abuelita's hot chocolate. Abuelita means grandmother in Spanish and my grandmother used to make us hot chocolate brewed with cinnamon sticks. It was so good, perhaps that's why I like this recipe so much. It's rich, chocolaty, spicy, sweet and just plain yum! Preheat oven to 350 degrees F. Grease two 9x5x3-inch loaf pans and line the bottom of the pans with parchment paper.

In the bowl of an electric mixer, cream together the butter and sugar with the paddle attachment on medium speed, until light and creamy, about 5 minutes. Add eggs one at a time, beating until each egg is completely incorporated before adding the next and scraping down the sides of the bowl several times.

Meanwhile in a medium bowl, sift together the flour, cocoa, cinnamon, salt, baking powder and baking soda. In another bowl, whisk together the buttermilk, water and vanilla. With the mixer on low speed, alternately add the flour mixture and buttermilk mixture to butter, beginning and ending with the flour and beating just until blended. Divide the batter between the two pans, shake the pans to even the tops and set aside.

In another small bowl, whisk together the sugar, cinnamon, cocoa, ginger and cloves. Sprinkle the surfaces of both batters with the decorating sugar. Sprinkle with the cocoa sugar mixture, dividing evenly.

Bake until a toothpick inserted in the center comes out clean, about 45-55 minutes. Let cool completely, run a thin knife around the sides to release breads and remove from pans.

NOTE: This recipe makes 2 loaves. I did not line the loaf pans with parchment paper and they turned out fine. I made this recipe in a large mixing bowl with an electric hand mixer. It worked fine, but you need to use a LARGE bowl or it can get messy. If you have a stand mixer, use it.

I did not have ground cloves or ginger, so I added a couple pinches of pumpkin pie spice, which has those two ingredients in it as well as cinnamon. It did not produce a noticeable difference. Also, since I did not have decorating or sparkle sugar, I doubled the granulated sugar. I think that was a mistake. There was too much sugar and after the baking, most of it fell off anyway. If you don't have the decorating sugar, just omit it. 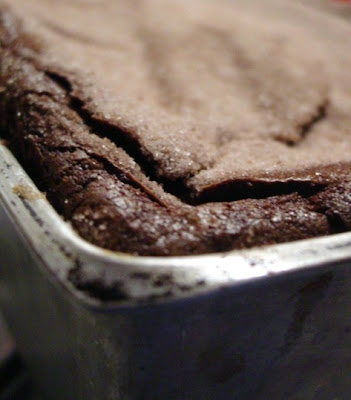 I made this for Christmas, because my Grandma really likes pumpkin bread. It was good and moist, but I'm so picky about pumpkin bread and I always compare it to my favorite brand, that usually nothing measures up. We (my Grandma and I) used to visit a local coffee shop and we'd sit for about an hour and talk. We had such great times there. That really helped me too, when I needed a shoulder to cry on after my losses. When we'd go, I always used to sneak in a couple slices of pumpkin bread from the above bakery. They closed recently [the coffee shop] so we haven't been able to do that in a while. So, since she has needed comfort (since she was diagnosed with cancer), I wanted to do something special for her by making this bread. My Grandma liked it so much, she horded it all to herself, so that must say something about this recipe. I love you Grandma!

Bake for 60-70 minutes or until wooden toothpick inserted in center comes out clean. Cool in pan on wire rack for 10 minutes. Remove to wire rack to cool completely.

NOTE: I doubled this recipe and it worked out just fine. I did not add nuts since there are nut allergies in my family, but I'm sure it would be equally delicious. I also baked them slightly longer (about 5-10 minutes extra) than the recipe suggested. If you like more of a "spice" flavor in your pumpkin bread, then add extra cinnamon or pumpkin pie spice. If you don't have pumpkin pie spice, click here to make your own blend.

This bread is much better the next day. Wrap it in plastic wrap and allow the crisp edges to soften- yum! Also, it needs to be refrigerated if it's not going to be eaten within 2 days. 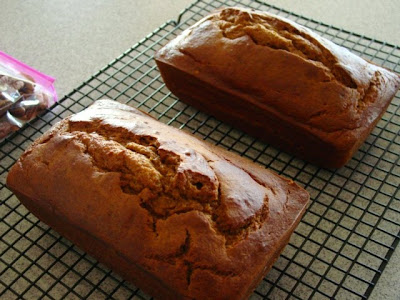