Lemons, Limes and Oranges. Oh My! 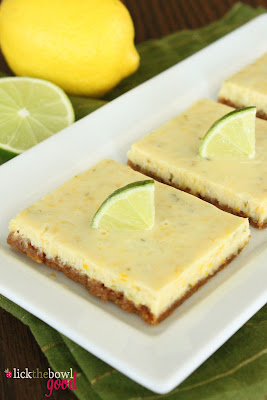 I made these a few weeks ago and I forgot to share them. Forgive me. I got wrapped up in Hayden's birthday extravaganza that they got lost in the shuffle. I realize Fall is officially upon us but when you have a dessert with this much citrus zest, you just have to share them. Am I right? Besides you have all season long to bake with apples, pumpkins and comforting spices, so today it's all about lemons, limes and oranges. Hooray! 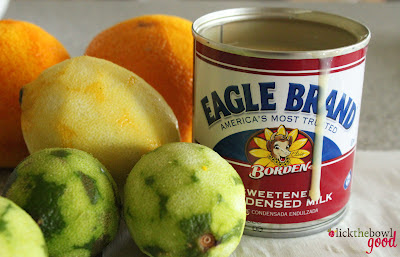 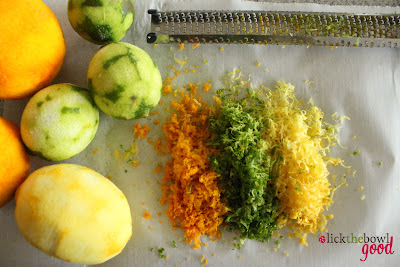 I got this recipe from my friend Memoria of Mangio da Sola. She made these over two years ago and they've been in the back of my mind ever since (Hi Memoria! We miss you!). I love key lime pie and could eat a whole pie by myself, as embarrassing as that is to admit. While I was pregnant with Hayden, I craved it all the time so I was pleased to discover that these bars were very similar. But these are a little different because they have a touch of cream cheese in them that makes these a bit more like cheesecake.

Part key lime pie, part cheesecake bar, all goodness. They were creamy, tart, tangy and loaded with flavorful citrus zest atop a buttery golden crust. I misread the directions and baked them in a 9x13-inch pan instead of a square dish so mine were thinner than expected but still great. If you want a thicker, taller bar to sink your teeth into just use a smaller pan. Either way, they're sure to satisfy. Thanks for sharing the recipe with us Memoria. I hope you're enjoying Italy! 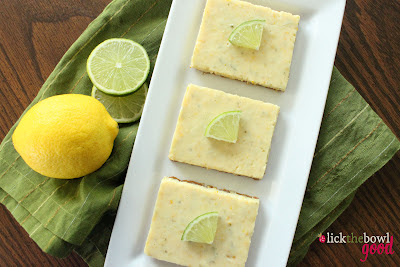 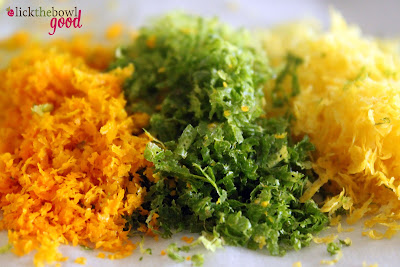 To make the crust: In a medium bowl, mix graham cracker crumbs, brown sugar and salt. Drizzle butter over crumbs and stir until crumbs are evenly moistened with butter. Press crumbs evenly and firmly into bottom of prepared pan. Bake until deep golden brown, 18 to 20 minutes. Cool on wire rack while making filling. Do not turn off oven.

To make the filling: While the crust cools, in medium bowl, stir cream cheese with the lemon, orange and limes zests with a rubber spatula until softened, creamy, and thoroughly combined. Slowly add sweetened condensed milk and whisk vigorously until incorporated and no lumps of cream cheese remain; whisk in egg yolk. Add juices and whisk gently until incorporated (mixture will thicken slightly).

To assemble and bake: Pour filling into crust; spread to corners and smooth surface with rubber spatula. Bake until set and edges begin to pull away slightly from sides, 15 to 20 minutes. Cool on wire rack to room temperature. Cover with foil and refrigerate until thoroughly chilled, at least 2 hours.

Cut into squares and serve chilled. Will keep in the refrigerator for up to 3 days. 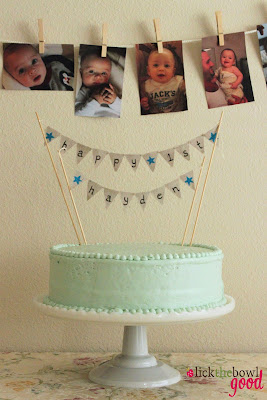 As I mentioned in the last post, we celebrated Hayden's birthday last Saturday with a party at our home. We had friends and family over for food, cake and fun. I'm not big into character themed birthday parties and cakes and since Hayden doesn't have much of an opinion yet regarding these kinds of things, I did what I wanted- and that was simple and classic party food, made pretty.

I went for a buffet style setup so everyone could take and eat what they wanted, and used the cake as the centerpiece of the table. Here's what I made: 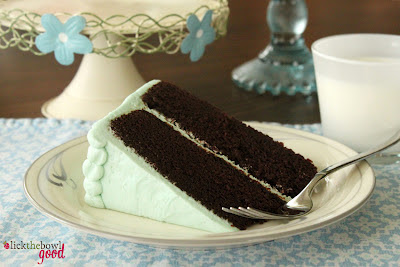 Last November I made a chocolate layer cake for a family friend (Hi Marnie!) and loved that cake so much. It really was one of the best chocolate cakes I've ever had and what sets it apart from others is that it's made with copious amounts of brown sugar. I knew I wanted that cake for Hayden's birthday so, I increased the recipe 1.5x and baked it in two 12-inch pans. I used a double recipe of my favorite cream cheese buttercream for the frosting because I wanted to be able to tint it a soft robin's egg blue. 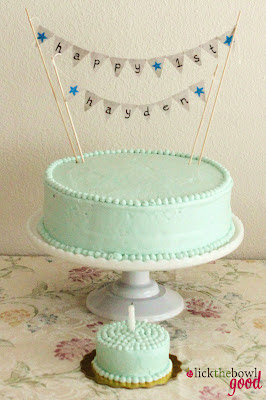 I fell in love with the Bunting Banner that Christa from Mini Baker made for a wedding shower cake a few weeks ago. I contacted her and we emailed back and forth and she made a custom birthday banner that read "Happy 1st Hayden" complete with hand painted blue stars. It turned out better than I expected and complimented the cake and decor. If you want one of your own, head on over to Mini Baker's Etsy Shop, browse around at her handmade items and place your order! She's got some cute stuff over there. Thanks Christa for working with me on such short notice- it turned out perfectly! 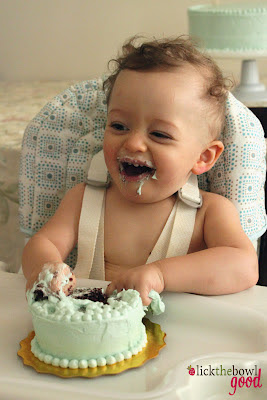 Hayden dug into his cake like a pro. At first it was just fingers in the frosting, then before you knew it he was shoving handfuls of the stuff into his mouth. Then he got to the cake part and started sharing with his Daddy and Autumn and was starting to make a mess on the floor. I don't really know why he started crying, but it was funny. A naked baby covered in cake with teary eyes is enough to make a sucker out of anyone. Silly boy. 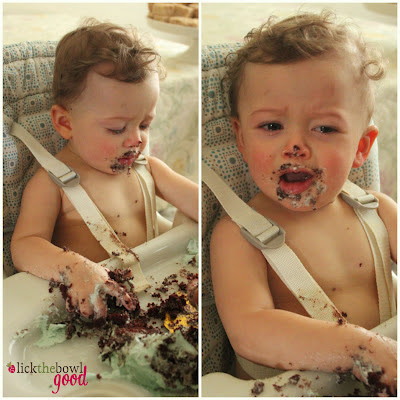 And lastly here's a picture of the three of us, just after singing Happy Birthday. It was a great day and we're so blessed that we made it through Hayden's first year in tact and without any major injuries, growing better with each passing day. Happy Birthday Hayden, We love you! 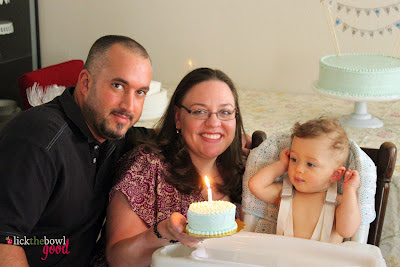 And thank you to all of you who supported us, cheered  us on and offered words of encouragement  throughout the past year. We appreciate each and every one of you!
Recipe Made by Monica H at 2:50 AM 22 comments: 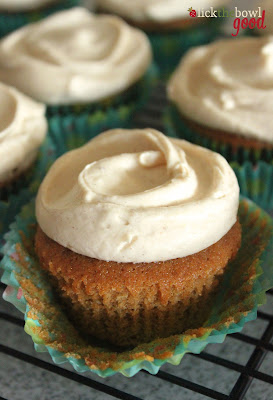 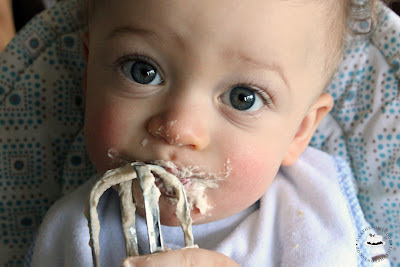 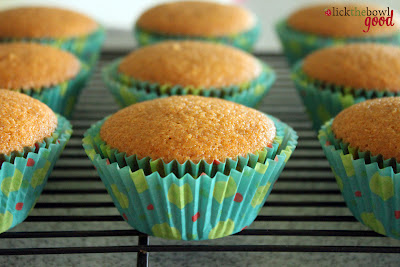 I debated between pumpkin, banana, carrot or apple his cupcakes. Mr. H doesn't love the first two so that left carrot cupcakes or apple cupcakes, except Hayden is kind of funny about textures in his food so I wasn't sure he'd like shredded carrots in his cake. And I was out of apple sauce. Enter his baby food- Plum Organics carrot and apple puree. It's delicious and worked perfectly in this recipe. You could use all carrot or apple if you prefer, but this is what I had on hand and it was a success. You could taste both fruits, but overall it was just like a moist and moderately sweet spice cake topped with a brown sugar and spice cream cheese frosting. It doesn't get much better than that! 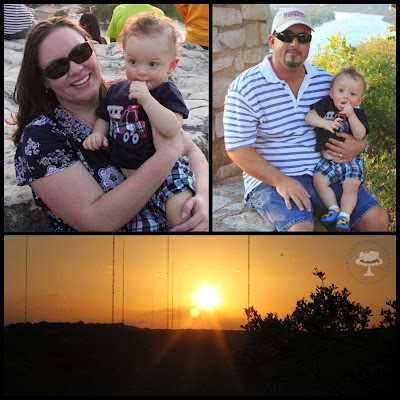 Preheat oven to 350 degrees F. Line a cupcake tin with paper liners and set aside.

In a large bowl, cream butter and sugars til fluffy and pale in color. Add the cinnamon and nutmeg and mix until the spices are fully incorporated.

Add the eggs, one at a time, until well blended then add the maple syrup and vanilla and mix.

Gently add the flour, baking soda and salt. Stir until just combined but avoid overmixing the batter. Scrape down the sides of the bowl with a rubber spatula then add the pureed carrot and apple mixture. Stir until combined.

Divide batter into 12 cupcake liners, filling each about 3/4 full.
Bake for 18-20 minutes or until a toothpick inserted into the center comes out clean. Allow cupcakes to cool slightly before removing to a wire rack to cool completely before frosting with Brown-Sugar and Spice Cream Cheese Frosting.

Brown Sugar and Spice Cream Cheese Frosting
In a medium bowl, beat cream cheese and butter until creamy and smooth. Add the brown sugar and spices and beat on medium-high speed until fluffy. Use immediately.


Where does the time go?! I've been meaning to get a post up here for over a week. Hayden's first birthday was last Saturday and we had his birthday party today. Needless to say I've been busy! But now that the celebration is over, I can relax a little and breathe (most importantly) and play catch up. Until then, I will leave you with a link to my friend Paloma's blog, The Coffee Shop. I did a guest post for her Coffee Friday segment yesterday and I'd love for y'all to head over and visit her for all things coffee.

I'll be back in a couple days to share Hayden's birthday cupcakes! Enjoy the rest of your weekend!