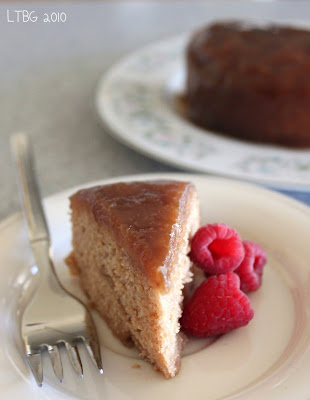 This is the second cake The Cake Slice Bakers have made from Cake Keeper Cakes by Lauren Chattman. Geez, how many times can you say "cake" in one sentence?! Cake. Cake. Cake. Cake. Cake. ha! The winning cake this month was Cinnamon Pudding Cake. I adore cinnamon so I was super excited about making this cake, but in the end I thought it was a little disappointing. 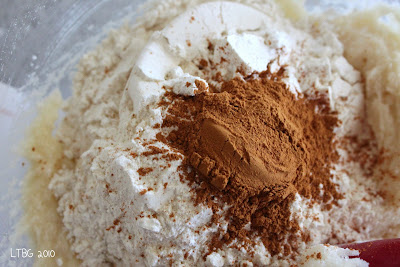 I've never had a pudding cake before so I wasn't sure what the end result would be like, but I was expecting something gooey- something with a molten center and this was not that. A lot of the bakers commented that it was very dry. My cake was not dry, but I also reduced the baking time by 10 minutes so I think that helped some. While the cake part was not gooey, the topping was. This cake starts off by pouring the caramel on top of the unbaked cake. As it bakes, the caramel seeps through the cake and making it's way to the bottom of the pan. It turns out like a 'self-frosting' upside down cake. 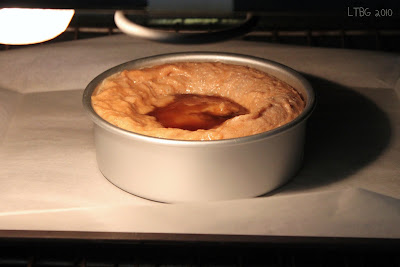 The cake was very much cinnamon flavored. But I felt it was kind of one-note. In my opinion, it was very one dimensional...it just lacked something. The caramel glaze saucy stuff on the bottom top of the cake was good but very sweet. All in all, I'm glad I made this cake. At least I can say I've made and eaten a pudding cake, but I don't think this is one that will make a repeat appearance in my kitchen. But I haven't given up, I will try another recipe...perhaps one with chocolate! 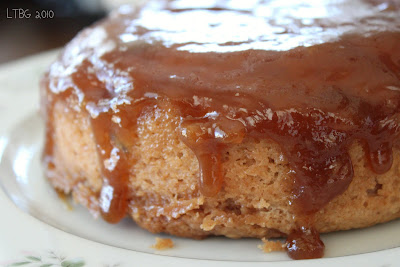 For the caramel topping:

Preheat the oven to 350 degrees F. Spray the bottoms and sides of an 8-inch square baking dish with cooking spray. ( I used the kind with flour).

For the topping: Combine the brown sugar, water, butter and salt in a saucepan. Bring to a boil, stirring occasionally, then set aside to cool.

For the cake: In a medium bowl, combine the flour, baking powder, cinnamon and salt.

Combine the butter and sugar in a large mixing bowl and cream with an electric mixer on medium-high speed until fluffy, about 2 minutes.

Reduce the mixer speed to low, and add 1/3 of the flour mixture to the bowl. Add half of the milk and all of the vanilla. Add another 1/3 of the flour, mix til just combined, then add the remaining milk, then the rest of the flour. Scrape down the sides of the bowl and beat on medium speed for 30 seconds.

Scrape the batter into the prepared pan and smooth the top with a rubber spatula. Pour the topping over the batter (the pan will be very full). Carefully transfer the pan to the oven and bake until set, about 35-40 minutes. (The top of the cake might be slightly damp looking on top, but a toothpick inserted in the center should come out clean.)

Let the cake cool in the pan no longer than 5 minutes or the caramel will stick to the pan. Invert it onto a large rimmed platter. Serve warm.

Store cooled cake at room temperature for one day or up to 3 days in the refrigerator in an airtight container. 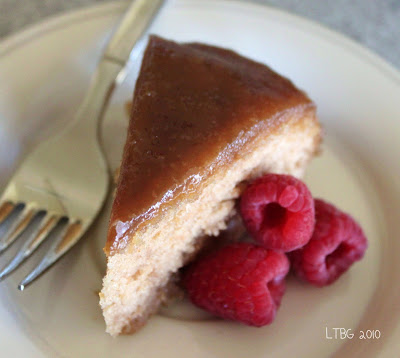 BTW, the word "cake" appears in this post 35 times. dang!

Your cake looks wonderfully gooey. I loved this cake but agree the cake part could ahve been a bit more puddingy. I'm jealous of how cleanly yours came out of the pan. Mine stuck like anything!

CAAAAKE! CAKE CAKE -- okay, I'll stop ;) This looks yummy -- sorry it wasn't everything you'd hoped, though! I've never made a pudding cake before either, but I think I'd've expected the same thing -- goo!

I've made cakes like this, that are beautiful to look at and SEEM like they should be great, but they are missing some unknown something (in other words I know what you mean lol). Your photos are gorgeous.

looks delicious and as Cinnamon Cake it might be great for Advent and Christmas time!

The cake looks delicious and I'll bet your house had a wonderful aroma wafting through. I've had a recipe for chocolate pudding cake that I plan to make--someday. Actually, I've had the recipe for so long I can't remember what food magazine I clipped it from.

I have never made a pudding cake either. I think a chocolate one would be delicious. Especially if it gets super fudgy. Yum.

Makes me sing that Baskin Robbins commercial, "Ice cream and cake and cake!"

It's so frustrating when something SHOULD be wonderful and it just isn't. I can relate....

for one i'd like to congratulate you on actually counting how many times you said cake, xD i wouldnt have bothered haha. second, i'm sorry you didnt like it, but it looks so beautiful! you have amazing photography and food placement skills.

I'm glad yours didn't turn out dry like mine did - definitely the baking time was too long when I did it. I kept thinking I was going to try this one again to get better results, but I never did and now I'm kind of glad... I just couldn't have dealt with having another cake in my house that I didn't really like! I'm hoping next month's cake is much better!! In any respect, the cake looks gorgeous!

I'm LOL at the 35 times! I agree with you that it was a little one-dimensional. I'm wondering whether some grated apple or some ground ginger would help it along a bit more.
Beautiful photos!

That glaze on top really does look yummy. But chocolate, oh yes, that really would be the way to go...mmm, chocolate!

I love how gooey this cake looks!!!

I'm sorry it didn't taste as delighful as it looks :(

I love caramel and that shot with it dripping down the side-looks heavenly!

I wonder if something as simple as adding sultanas might have made all the difference?
As I said, before, beautiful photography!

I wonder if it would be any better if you added some walnuts or pecans to the cake part. Going to give it a try because I love pudding cake. Lemon and Chocolate are my favorites.
I make a chocolate pudding cake in the microwave. It's super simple and fast when I'm craving something gooey and chocolatey...the "topping" is kinda sweet on that one too (I think all that sugar must be the secret to it oozing through to the bottom)so I add a scoop of vanilla ice cream or some whipped cream to my serving :)

Monica-- I agree with you totally on this cake.. not sure if it will be a cake "staple" for me in my kitchen, but I am very glad I too made/tasted a pudding cake for the first time

Beautiful photos! I have to agree with your 'one-note' comment in that the flavour is very subtle. I paired this cake with pumpkin ice cream and it was way too much - you couldn't taste anything except pumpkin ice cream!
PS Hope you're counting the no. of times 'cake' crops up in the comments too!

Love your pictures Monica! I too am glad that I made this cake even though I didn't fall in love with it.

Well, now, doesn't this just take the CAKE! Caramel... love it, as you know. What a bummer that the CAKE didn't ring your bell. Still, you made it look fabulous.
PS: I ordered my box of Lammes chews today, no thanks to you!
:)

Bummer! Looks perfect though. Tweak it and then get back to me, 'kay?!
~ingrid

Sorry the cake didn't turn out better for you...as always, with everything you make, it looks absolutely gorgeous and yummy.

I added sultanas to my version of this cake and it still wasn't great.

Like your idea of giving it a go with chocolate instead.

My experience was almost exactly the same as yours. It would need a ton of tweaking for me to make it again.

Your pictures are fantastic!

I really think it sucks that you were underwhelmed with this cake. I think you need to try it my way. If you still don't like it, I won't make you make it again. But I definitely think the cinnamon chips and walnuts added that lacking something. Everyone who tried it said it was a little bit of amazing...

Your cake looks great. It certainly has a lot more topping than mine did. I am going to give it another try taking advantage of all of the comments from the other bakers. In Australia these types of cakes are called self-saucing puddings. My favorite is lemon.

Monica, I felt exactly the same way that you did about this cake. Making no adjustments I felt that the cake was good, but not stellar as was the apple cake. Basically it was a cinnamon cake with almost a pecan roll inverted icing! I have not posted it yet, because I am not happy with my photos, but maybe after this week's whirlwind activities, I may do it.

Have a Happy and Blessed Thanksgiving Monica!

Nice looking cake even if it didn't live up to expectations. DO try a chocolate or lemon pudding cake...they can be very nice.

What a bummer it wasn't spectacular =( In theory it sounds amazing, and the pictures are lovely. I love cinnamon, but I'm lame and can handle a cinnamon roll or struesel from the grocery store when I need a fix =P

I'm just catching up on blogs - that cake looks so good - I just printed the recipe - even though I have the cookbook!