A Thanksgiving Side and Vacation Videos 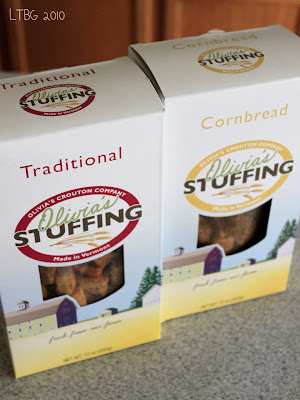 Several weeks ago the folks at Olivia's Croutons sent me some Olivia's Stuffing to try out (Thank you!). I loved their croutons so I was excited to try their stuffing mixes too. Don't you love the farm on their box? They sent me their Traditional and the Cornbread stuffing free of charge. They did not ask me to blog about it, but that's what I do! So here I am sharing my recipe with you. I don't make stuffing often, but when I do, it's with cornbread. Day old, homemade cornbread- never with stuffing mix, so this was new for me. 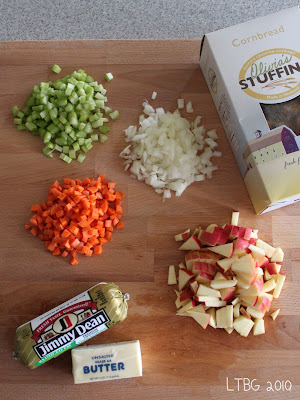 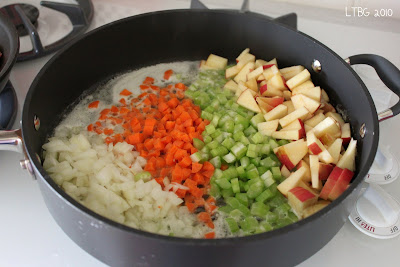 I adapted my recipe to accommodate the stuffing mix, by adding more liquid and adjusting little things here and there. It makes a ton so it's great for Thanksgiving or other large crowds. You can also cut the recipe in half or make the full batch and share with someone else or freeze it. My mom usually makes hers with added giblets, which I love, but this one is a little different as it has apples, sausage and Texas pecans in it. I invited her over for dinner the night I made it and she loved it. I also served it with My Favorite Pork Tenderloin and store bought creamed spinach. 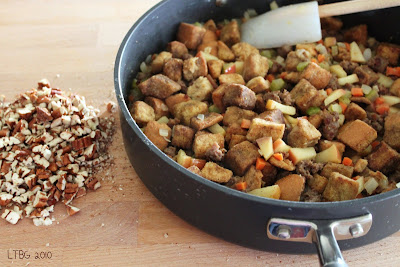 Now this is where I have to be honest, because that is who I am. I thought this recipe tasted great but I thought the stuffing pieces were too large. They softened with the addition of chicken broth but they were just too big for my liking. I guess that's mostly because I'm used to a fresh cornbread stuffing, thus it's softer and more cohesive, like a bread pudding. But if you like a chunkier stuffing than Olivia's stuffing is for you. By the way, do you call it Stuffing or Dressing? Answer my poll on the top left sidebar! 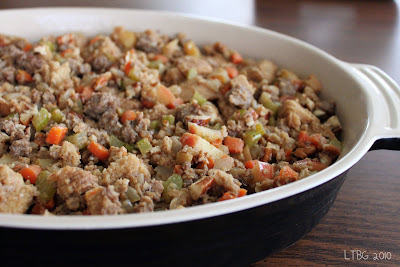 In a large pan, brown breakfast sausage over medium high heat, crumbling as you go. Once cooked, remove to a bowl, discard off excess fat.

In the same pan, melt one stick of unsalted butter. Cook carrots, celery, onion and apple until softened but not brown. Stir occasionally.

Remove from heat and add the box of Olivia's cornbread Stuffing to the veggie mixture. Stir then add chicken stock. Stir occasionally then let the stuffing rest for about 10-15 minutes to absorb all the liquid. Add more liquid if necessary. I added 3 cups but not too much because you don't want it soggy.

Once liquid has absorbed, sprinkle with poultry seasoning, salt and pepper. Mix together, taste and adjust if necessary.

Once the stuffing mix is to your liking, fold in one beaten egg to help bind it all together. Fold in pecans, reserving a few for the top.

NOTE: Dried cranberries would be really good in this too! 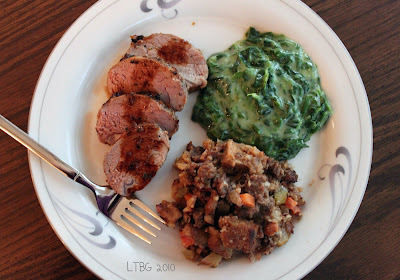 And for those of you interested, here are a few short videos of our trip to San Francisco and Sausalito, California. And as an added bonus, you get to see me being a dork :-)

Hope you enjoy them!
Recipe Made by Monica H at 6:35 PM

Such fun videos to be able to peek inside your vaca experience Monica!

AND a VERY yummy stuffin'! - gorgeous colors of ingredients put together to make that stuffin'....:-)

Btw, I'm in awe at how perfectly diced your veggies are! You obviously have some serious knife skillz!
~ingrid

You must have had a good time since you don't know where you are or the date!! So glad that your husband had arrived to rescue you. = )

Here's my definition of stuffing vs dressing: It is stuffing if you stuff it into something. It is dressing if you put it in a container and bake it separately. Whatever you call it, your additions are very similar to mine including the sausage. I add prunes. Yes, prunes! I first macerate them in madeira. I've not heard of Olivia's Mixes but do like the packaging.

Hmm, I don't hear a Texas accent in your narration.

I don't like stuffing, but that is what we call it here.

I love how you look at your hubby-he just fills in the info :)

Bonnie- That's how I distinguish the two as well, but even though we've never stuffed the bird, I still call it stuffing :-)

LOL! I love that you couldn't remember where or when you were. ;-)

This dressing looks great though! It's a shame the pieces were bigger than you enjoy. I love, love, LOVE cornbread dressing.

Oh, and I call it dressing if it's on the side and stuffing if it's cooked in the bird. ;-) But I voted.

I've been wanting to try a sausage stuffing, I'm saving this one, sounds great!

I adore cornbread dressing! My husband's grandmother makes the best I've ever had... and she uses "real" corn bread. I've been tempted to use dried a few times... I know Peppridge Farm's version is smaller pieces, so you wouldn't have the issue with the big chunks.

Thanks for the vids! I love the night view with the city lights. I always put apples in my stuffing too :)

I never have been a fan of stuffing at all! As a kid, I always felt like it just took up room in my stomach on Thanksgiving that I could be filling with other yummies!... But yours sounds really good with all the add-ins.. I might just have to try it. Love your videos! Oh how i miss California!

About the STUFFING. I'm with you, girlfriend. I'm all about cornbread. I appreciate your honesty, too. I don't like big chunks of bread, either. My boys would eat this stuffing 24/7, though. For some reason they're crazy about it. Me? I'll have seconds of sweet potatoes, thank you very much! As for the videos... first, THANK YOU, for not capturing ME on video acting my dorky self. I had no idea our twin cameras could do that! I'll call you for a tutorial. It's so sweet to see your smiling face and to hear your voice. I miss that. Why is it that I didn't get photos of Mr. H? Is he the Stedman in Oprah, where he keeps a low profile from his celebrity food blogging wife? Kiss him on the cheek for me. He's a sweetheart!

Thanks for the great recipe for sausage, apple and pecan stuffing. I think this could be a great addition to the Thanksgiving table.

Boy does that creamed spinach look good! I'm going to have to run to Boston Market to get some!
I'm glad you had gorgeous weather when you were here in sunny California, we just started getting ugly weather last week. It really looks like fall/winter now!

Stuffing, one of the best things about the holidays! Loved the reminders of Sausalito and Vista Point. Good memories!

Love the videos! And WOW to your stuffing pictures. That looks insanely good. I'm so glad tomorrow is the day for pigging out.

I'm making cranberry orange stuffing. I hope it turns out! My mom is an utter crazy person when it comes to Thanksgiving perfection.