On our way home from Fredericksburg we stopped by a roadside stand and bought some beautiful peaches and zucchini. We bought about a dozen and a half of the fuzzy blush fruit and on the way home I kept wondering what I was going to bake them into. Would it be a peach pie, a cobbler, a crumble, a crisp, ice cream??? 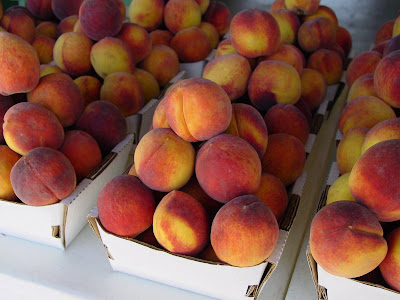 Then I asked Mr. H what his thoughts were and he said I wasn't allowed to bake them because I'd "ruin them"! And he was very adamant about that too so I didn't bake them. Although everytime I sliced one up or walked by them and smelled their sweetness, I was tempted.

Then I remembered I had Fredericksburg Peach Preserves (ding! ding! ding!) so I used that along with the zucchini in these muffins and they were wonderful! The original recipe calls for canola oil and orange marmalade, but I used softened butter and peach preserves. They were still moist, tender, fragrant, and sweet, with little bonus pieces of peach from the preserves. They were really delicious and I liked the chew of the dried cherries. I would like to experiment with apricot jam and dried apricots too. Maria and Debby, I'm talking to you :-)

In a bowl, stir together the flour, sugar, baking powder, baking soda, salt and cinnamon.

In another bowl, whisk together the eggs, oil, jam, vanilla and zucchini until blended. Add the flour mixture in three additions and beat just until evenly moistened and smooth. Stir in the raisins or cherries and nuts (if using) just until evenly distributed. The batter will be stiff.

Spoon the batter into the muffin cups, filling each no more than three-fourths full. Bake until the muffins are golden, dry and springy to the touch, and a toothpick inserted into the center comes out clean, 17 to 20 (mine took 18) minutes. Transfer the pan to a wire rack and let cool for 5 minutes. Unmold the muffins. Serve them warm or at room temperature, with butter and more jam.

NOTE: I froze these after they were cool in a large Ziploc bag. I defrosted/warmed them in the microwave for 45 seconds and we were able to enjoy them throughout the week and they tasted just as fresh, if not better.

The original recipe calls for canola oil, but I used softened butter and it worked out just fine.

Sounds very yummy. I bet those peaches were so tasty.

Looks delicious. I love all kinds of muffins!

Yum those peaches looks so tasty! Too funny he wouldnt let you "ruin" them!

What a great way to use jam :) You always have such great recipes!

What a delish combo!! I hear the cry, though...fresh, juicy, dribble down your chin peaches are best just eaten as is :D

I've never had anything baked with zucchini.

Mr. H cracks me up. Sounds like something one of my guys would say.

Hey, I LOVE that photo of the muffins sorta in their tin! Niiiiiiice!
~ingrid

These look wonderful, I don't don't know how you resisted, there is something about fresh peaches that makes you want to create!

Peach i muffins yes..but zucchini..that I definitely need to try..your muffins look tempting enough to get me to make some...

Great way to use up the fresh summer produce!

OMG, that last photo is so so calling my name. Those peaches look gorgeous, though I don't think it's possible to ruin 'em ;), especially in your baked goods. I do love using preserves in recipes, though, yummy idea.

Loving this combo and like Sophie, that last picture is tempting me to reach through my damn screen, it looks so freaking delicious!

I came acrossed your blog from Donna-FFW. I am so glad I did. It absolutely wonderful. I love your posts.

I actually made homemade Cinnamon Peach Jam and is by far my favorite Jam that I have ever had.

LOL at the "ruin them" comment. My hubby would probably agree only because he doesn't eat many sweets. Your muffins look fabulous!

I want a muffin just like that for lunch....Would you have been allowed to cut those peaches up and put them in a bowl of ice cream with some chocolate or raspberry sauce--it's not baking!

Looks scrumptious. I was wondering if it's be okay to add fresh diced peaches instead. would it turn the muffin all soggy?

Since I've never made the muffins using fresh peaches, I cannot attest to the taste, texture or final outcome of the muffin. However I THINK they would be okay so long as you didn't as so many and you kept the dice pretty small. You may have moister spots right around the peach but I don't think they'd be soggy.

If I were you I'd probably blot the peaches to remoove some of their juices and sprinkle them with a little flour before folding them in the batter do they don't sink to the bottom.

If you do make them with fresh peaches, I hope you'll share the results with me :-)

Thanks for stopping by!

Unconfidential cook- I asked him and his response was "uh..no."

Yumm! Delicious snack! The dough looks so tender and light!

As you'll see from my recent post, I'm also a huge peach fan. ;)

These muffins looks divine. We have zucchini coming out of...well, everywhere...so I might have to try them!