Monkey Bread With A Side Of Monkey Toes 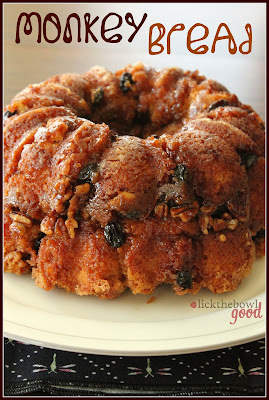 A friend of mine, Maranda of Jolts & Jollies, gave birth to a beautiful baby boy last Monday, August the 8th. Mr. H and I went to visit her in the hospital the very next day when her little man, Baby N, was just one day old (go here to see Baby N). I was so excited to meet him. I got there, smelled him and and held that little bundle of deliciousness in my arms. Then I was told to check out his feet because his toes were incredibly long and "monkey" like. They were and I teased that when he got older he was going to pick things up with his feet. ha ha! Just 3 days later, I went to the doctor and got an ultrasound. We didn't get any clear pictures of his face, but we got a good one of his foot. As soon as the ultrasound tech saw them, she said, "he's got monkey toes!" 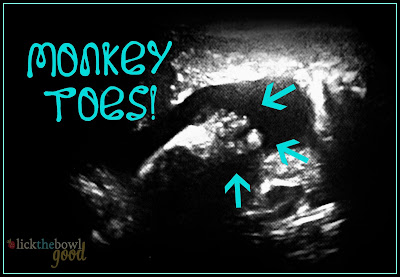 This month, for The Cake Slice Bakers, we baked a Hungarian Coffee Cake, also known as Monkey Bread. Because of this months selection, I thought it was perfect timing to share those stinky toes with you all. This Monkey Bread also marks the end of baking from Cake Keeper Cakes from Lauren Chattman. We've been baking from this book for nearly a year already and soon we will bake from a new cake cookbook. It's a secret for now, but I hope to share it with you all next month. I hope it's a good one! 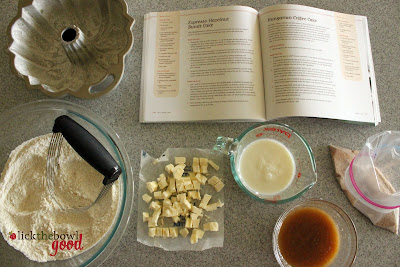 On to this cake...it's Monkey Bread. You've all had it right? Little cakey or yeasty balls of dough, coated in butter and cinnamon sugar all baked together into a Bundt. The end result is a delicious smelling and tasting cake perfect for lazy weekend mornings. I especially liked this cake because it sat out on the counter all day and it was just to easy to walk by and pull a piece off. On the other hand, maybe that's not such a good thing. I halved the recipe and baked it into a 6-cup Bundt rather than making the entire cake, after all it is just the two of us eating for now. My only complaint is that is wasn't so fresh tasting on day two, but that's okay because we ate most of it anyway while it was still warm and gooey straight out of the oven. This version incorporates chopped nuts and raisins into the cake, but it would be equally delicious without them. 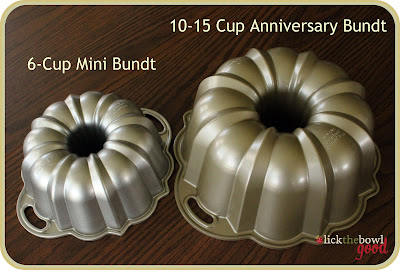 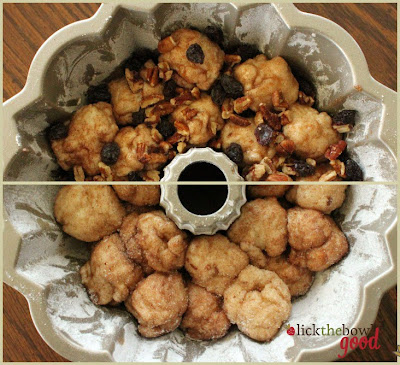 For The Topping: Whisk together the melted butter and light brown sugar. Set aside.

For The Cake: Preheat the oven to 350 degrees F. Grease a nonstick 12-cup Bundt pan and dust with flour.

Combine the granulated sugar and cinnamon in a sipper-top bag. Cut the butter into a 1/4-inch dice. Place the butter in a small bowl and set it in the freezer while you gather the rest of the baking ingredients.

Combine the flour, baking powder, baking soda, and salt in a large mixing bowl. Add the chilled butter pieces and, with an electric mixer , mix on low speed until the mixture resembles coarse meal. (I incorporated my butter into the flour using a pastry cutter.)

Stir in the buttermilk until the mixture just comes together, adding an extra tablespoon or two if the mixture is too dry.

Use a small ice cream scoop or spoon to scoop up balls of dough and transfer them to the zipper top bag. Shake the bag to coat the balls with cinnamon sugar. (I only did about 3 balls of dough at a time, otherwise they stuck together.)

Place the coated balls of dough in the prepared pans, sprinkling nuts and raisins (if using) over them as you go. Pour the melted butter/sugar mixture over the cake.

Bake until the cake is firm and well risen and the caramel is melted, 35 to 40 minutes. Let the cake cool in the pan, on a wire rack, for 10 minutes. Invert onto a serving platter and serve immediately.

Store uneaten cake in a cake keeper or wrap in plastic and store at room temperature for up to a day. 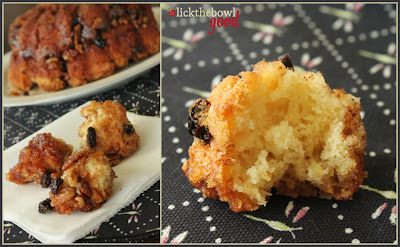 I'm so pleased to see this monkey cake recipe is a scratch one. Practically every other "monkey" recipe starts with a premade something or other.

Thanks for sharing the monkey toes!! I'm so excited for you.

I'm going to make this recipe again tomorrow morning,I have buttermilk that I need to use up. Mine turned out like a biscuit texture, I'm going to add a little more buttermilk when I make it in the morning, I hope to get more of a cake texture than a biscuit.
By the way...its better for your baby to have monkey toes than duck feet! My five year old has duck feet, and I always have to buy her a wide shoe! She'll never be able to wear "Stiletto's"! My poor baby!

Anabel- haha! I have wide feet too, so I was thrilled that he has my husband's feet :-)

Oh Monica those tiny baby toes are so cute. How exciting to get to meet him soon!

Your monkey bread looks amazing. Im so jealous. I used a different mix of flours and it was quite dense and crumbly. Your's looks so light and springy. Yum!

I love and agree with all u say about the cake .
Absolutely yummy and soft and cakey , which i loved!
And oh all that butter and cinnamon!
Am so happy to have baked this one along!s
Oh baby is soo so super cute :-)
And ur cake pretty too!

I'll bet you can't wait to kiss those little monkey toes in person.

I tell both my kids they're monkeys all the time. Claudia can climb trees (and walls) like nobody's business and Sam is all weirdly flexible. Don't think it has anything to do with toes though. :)

I am glad you called these little nibbles "monkey toes" though. I just saw a recipe this week for "monkey balls!!!!!" Can you believe that? Ick!

I hear about Monkey Bread all the time but I don't think I have ever had it. I will have to break out my bunt pan and try it.

Aww. I love those little monkey toes. Babies have the cutest toes and fingers, enough said :)

Your coffee cake turned out really well! However, my cake only took exactly 15 minutes to bake, and I also halved the recipe. Oh well, I guess different ovens cook differently :)

Your cake looks really great, nearly as good as the little monkey toes ! :)

Hello Monica! I saw your comment. Sorry you couldn't leave a comment on my blog. Not sure what's wrong. Thanks for the well-wishes and I'm so looking forward to seeing that little one when he makes his first appearance! :D
God bless!

Sweet little monkey toes! I loved that photo of you and baby N, btw! So cute.

What a precious ultrasound photo. Those toes are soo cute - almost edible!
Your cake looks great too and I am so impressed with your composite photo showing the two stages of assembly. I really need to start getting myself trained up in doing things like that.

Gorgeous Monica (...and I mean for both the cake AND the "monkey toes"!). I'm hoping to whip up this cake in the next day or two - I'm a bit behind @ the moment in making this month's CSB's cake but really want to make it as it looks really good. AND I will take your advice and have it eaten the 1st day rather than the 2nd or 3rd day. Thanks for the heads up.

I hope you are feeling well - I think of you often and send you lots of love!
~avril :-)

Monkey bread was a childhood favorite of mine and your version looks even better than the semi-homemade version my mom made -yum!

This cake looks so delicious, but not as smootch-able as those toes!!

Monkey toes and monkey cake - neither of which I've ever experienced! I'll definitely have to try this cake. I love the thought of just pulling bits off it as you walk past, munching as you go.

Your little guy has the sweetest little toes! And the monkey bread looks delicious. Great minds truly do think alike! ;)

Thank you for your nice comments! The muffins on my header are Strawberry. Here is the link to the recipe....http://ovendelights.blogspot.com/search/label/Muffins

So far this is my favorite recipe for muffins. I change it up every now and then with different fruit :)

I have been thinking of you and I hope you are feeling better. Times goes by really fast, so baby will come soon for you.
I am so excited for Miranda! her little boy is so adorable.

This breat looks so delicious.

Never made this before but it does look good! However, I like those monkey toes even better!!!!

Hi, I love your blog and your photos...do you use natural lighting? I'm just looking for some tips to help with mine.

Monkey bread is one of my hubs favorite treats! Looks great!

I'm glad you enjoyed this cake. I would have felt bad for telling you to make it if you hadn't enjoyed it. I love that your baby has crazy monkey toes as well! I can't wait to see those feet!!!