The Devil Went Down To Texas 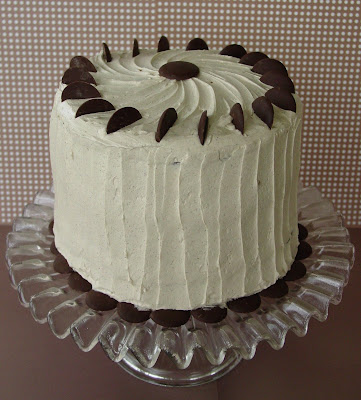 This is the second cake I've made for The Cake Slice Bakers and boy is it delicious! On a scale from 1-10, ten being the best, I give the Chai Cake with Honey-Ginger Cream that I made last month a 6. I give this Devil's food Cake with Brown Sugar Buttercream a 9.5! Honestly, it is that good. Go get the book Sky High: Irresistable Triple Layer Cakes from Alissa Huntsman and Peter Wynne- you won't be disappointed!

I've eaten Devil's Food cake before but I've never made it. That being said, I've made many different recipes for chocolate cake. After making this one, I'm wondering what the hell (get it, ha ha!) took me so long to make this. This recipe is going on my "must make again, because it was so darn good" list. It had an excellent crumb, it was chocolately, not too sweet, moist and fluffy. 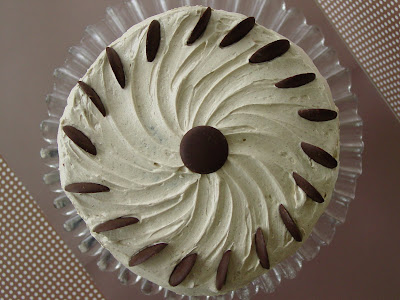 With this cake came two options of frosting: Brown Sugar 7-Minute Frosting and Brown Sugar Buttercream. I chose buttercream because if you're going to eat devil's food, you're obviously not on a diet, so why not have a decadent frosting to accompany it. How was the buttercream, you ask? Wonderfully creamy, soft and light, caramelly, cinnamony and the teensiest bit of sweetness. The best part though was that it wasn't overwhelmingly buttery, You know how you get that greasy feeling on the roof of your mouth? Well, not with this frosting. It is fluffed up and lightened with egg whites, but creamy from the butter. The brown sugar syrup provides the sweetness instead of using powdered sugar. I added cinnamon because I love it with chocolate and brown sugar. Reminds me of cinnamon toast. It was oh so dreamy.

I decorated it with Guittard chocolate discs. 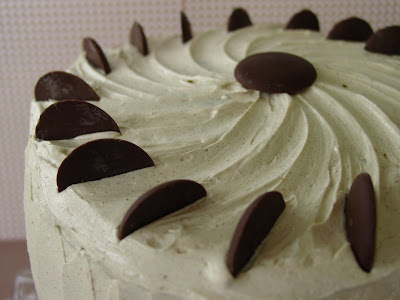 *1 cup of cake flour is equal to ¾ cup flour plus 2 tablespoons of cornstarch.

Preheat the oven to 325 degrees F. Butter the bottoms and sides of three 8-inch round cake pans. Line the bottoms of the pans with parchment paper and grease the paper as well.

Place the cocoa in a medium bowl and add the hot water. Whisk until smooth and let it cool to room temperature.

In the bowl of an electric mixer, combine the sugar, flour, baking soda, and salt. With the mixer on low blend to combine. Add the butter and the dissolved cocoa. Then raise the mixer to medium speed and beat for 2 minutes until light and fluffy.

In a medium bowl whisk together the eggs, vanilla, and cold water until combined. Add this liquid to the batter in three additions scraping down the sides of the bowl between additions. Divide the batter among the three pans.

Bake for 35-45 minutes or until a cakes tester inserted into the almost comes out clean. There should be a few crumbs attached still. Cool the cakes in the pans for 15 minutes. Then invert and remove parchment paper and cool completely on a wire rack.

NOTE: I halved this recipe and it made a triple layer 6-inch cake. I also made a mini 3-inch cake that I torted and filled with the cinnamon buttercream and covered in brown sugar. Completely over the top and indulgent but delicious! 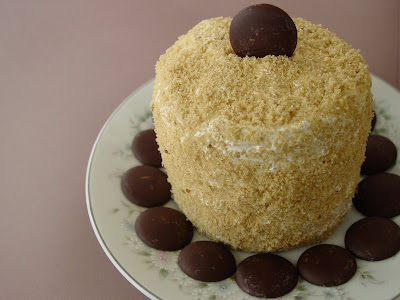 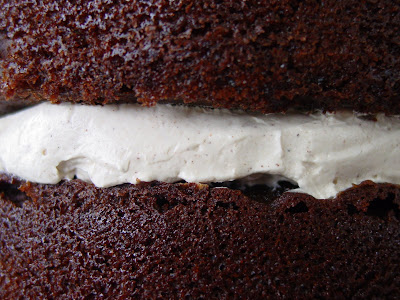 Place all the egg whites in the bowl of an electric mixer; set aside.

In a heavy medium saucepan combine the sugar and water. Cook over medium heat stirring to dissolve the sugar. Then bring to a boil without stirring and cook until the syrup reaches 238 degrees F on a candy thermometer.

Begin beating the egg whites on medium low speed. Slowly pour in the syrup making sure not to hit the beater. Increase the mixer speed to medium high and beat until the meringue has cooled to body temperature.

With the mixer on med-low add 1-2 tablespoons of butter at a time. When all the butter has been added increase the mixer’s speed to medium and beat until the mixture looks curdled or separated. Continue to beat until the icing comes together again looking like soft smooth whipped butter.

Mix in the cinnamon if using. 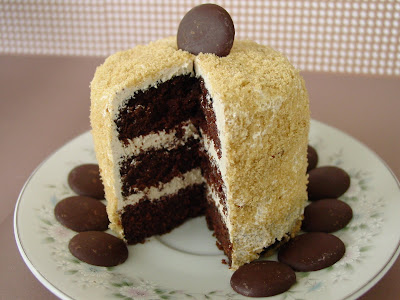 NOTE: A cake topped with the meringue frosting is the best eaten the day it’s made. It does not do well in the fridge.

If you choose the buttercream frosting you can keep it in the fridge for 3 days. Make sure to allow the cake to come to room temperature for 1 to 1 ½ hours before slicing. Otherwise the frosting will be hard and heavy.

For a printer friendly version of the cake and both frosting recipes, click here. 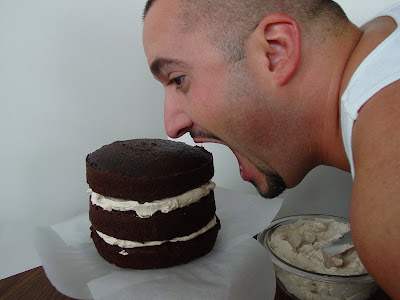 My husband liked it! 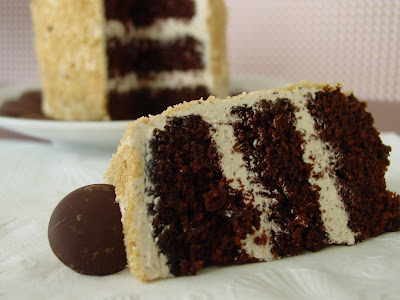 Check out all the other Cake Slice Bakers by clicking on the link then their individual blogs!

Wow looks fabulous Monica! I love how you decorated them both. The buttercream looks wonderful.

Wow, I love both versions but the first one is my favourite. I'm amazed that you manage to come up with 2 beautiful creations. Well done!

Excuse me while I jump through my computer screen and into your kitchen and steal this cake.

It looks simply exquisite and delicious!

Gosh, if you gave it a 9.5 I KNOW it has to be fantastic. It certainly looks fantastic. It actually looks incredibly undeniably delicious!

Now privately email me girlfriend and tell mw what rates a 10 on your blog, I am dying to try a 10 from you!

That is one fantastic looking cake. I am a big chocolate cake fan and I know I'll be making this. I've never made that type of frosting before with brown sugar. Thanks for the recipe!!!

You described the buttercream frosting perfectly! I agree when eating chocolate cake go all out with the frosting. Wish I had your "icing" skills.

That is insanity! I love it :)

I LOVE that picture of your husband trying to eat the cake - that's hilarious. :D

One time I made these cookies that my friends (one imparticular) absolutely love (I am REQUIRED to make them every Christmas). My husband made me send him (our friend) a picture text message with one of the freshly-baked cookies hanging out of his (my husband's) mouth. Men are so weird.... but that's why we love 'em, right? :)

All I can say is WOW!!! And I love that you added the cinnamon. Cinnamon and chocolate are the best of compadres :-)

Fabulous photos, Monica! You did a great job! Both cakes look amazing.

Thanks to you (& the cola cake)I know just how yummy cinnamon makes chocolate! So I know your addition of cinnamon is spot on!
~ingrid

I love this cake! Great photos! It is huge!!!

the cinnoman is such a great Idea! Love your photos.

Your cake is beautiful! I am a frosting kind of person, so I just love the sound of the frosting too.

oooohhhhhh (really that's all I have to say, the cake has me tongue tied)

Great looking cake...the pictures are very good and funny. From his expression, I am sure that he liked and a lot!

Yowza, that cake really is mile-high! You made two, no less and both look great. I agree with the 9.5 rating, this will be my go-to recipe for Devil's food cake from now on. I'll be using the buttercream next time. :)

Your cake looks so pretty! Love the way you decorated it!

Wow that is incredible, very impressive! Gorgeous presentation and I bet it tastes just as good :)

I really love how your cake turned out! Really beautiful!

BTW, I saw your other blog and I am so proud of you that you are sharing and working through the hard stuff the way you are. I am sending you all my good vibes and hopes and thoughts and prayers.

Holy Shrimp, that's one GORGEOUS cake!! I have *got* to get this cookbook... what on earth am I waiting for?!

BTW, I noticed the face in that cookie too -- how funny is that?!

I love how you decorated it! So simple but it really takes it over the top! :D

I'm speechless. Actually, I'm whimpering. That last shot of the chocolate cake is tantalizing. OMG, these look fabulous. I wish Texas wasn't so far away. I'd bring the coffee and wash the dishes just for a slice of that. LOVE the brown sugar idea. You are the bomb as a baker, girlfriend. Your hubby is a lucky man!

Beautiful!!! I really want a slice of the brown sugar cake, like right now! lol :)

This cake is magnificent, totally stunning! A 9.5?! How could I not make this soon? And that frosting sounds amazing!! Words cannot describe how much I want to get my hands on a slice of this cake right now!

Oh, your cakes are so beautiful!! They're making me wish I hadn't thrown away my last cupcake, even though it was very old and stale! And I love the addition of cinnamon to the buttercream! How luxurious!

So the hubby's birthday is right around the corner and he loves chocolate, I also haven't made a Devil's food cake before but I need to try this and I think I'll use his birthday as an excuse to do so!! Also, I am loving the sound of the frosting!

You are so gosh darn creative. Great job!

Hi Monica! From one Texas girl to another...you done Texas proud! That's a gorgeous cake, and I can't wait to make it. I love the photos...especially the one of your husband swooping down on the cake! Great job!

I'm thinking of making this cake for my sons first birthday and since its right before Halloween I'm making him a pumpkin cake. You know, the kind where you make two cakes in bundt pans and then stack them on top of each other. So my question is, do you think I should make the recipe as it is? I just don't know if the measurements will be right for two bundt pan cakes. Please let me know. Thanks