This weekend last year, Mr. h and I were in New Jersey so I could have cervical surgery in order to be able to carry Hayden to term. I wrote about it HERE, if you'd like to go back and read it. One full year later, Hayden is thriving and doing wonderfully and eating big boy food! He turned 6 months old on Thursday, March 1st. I think he was ready a couple weeks ago to start solids but I wanted to wait til he was a full 6 months old to introduce other foods besides milk. He may have been ready but his momma was not. My baby is growing up so fast! 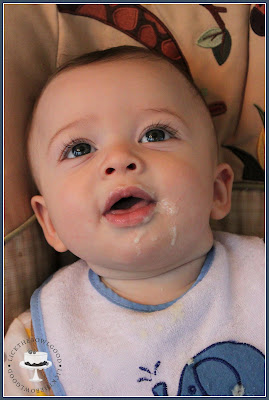 My mom bought him some rice cereal a couple months ago. His pediatrician said it okay for him to eat it but that it wasn't necessary so we weren't in any rush. But on Thursday he got his first taste and since this is a food blog, I thought I'd share his first food experience with you all. Here goes!

Day 1: Excited to be sitting in his high chair, but has no idea what is to come. 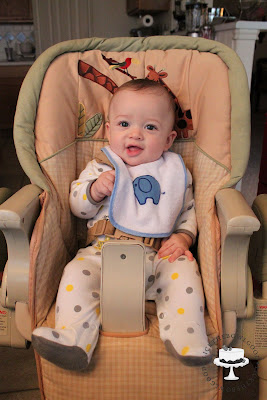 I let him pick the color of his bowl then Daddy and I took turns feeding him with his new spoon that Michelle of One Ordinary Day got for him. Isn't it great? You can get one from Lisa Leonard Designs. Thank you Michelle! 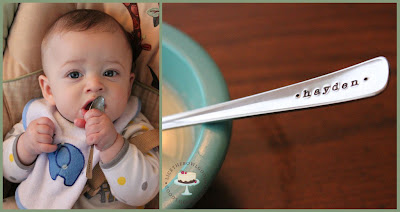 It started off okay, but he really was not a fan of the rice cereal mixed with milk. 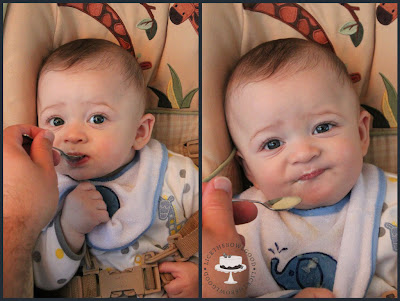 Day 2: My mom came over to feed him and Hayden was still not impressed, as you can see. We decided to try a little banana puree since he likes to gum on and lick chunks of banana. He really didn't take to it either, I think because of the texture. 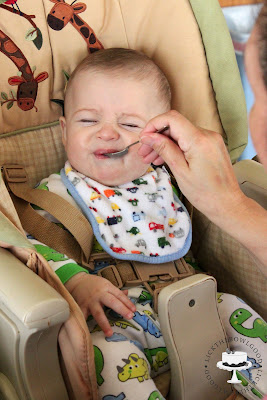 So we mixed the two together and he seemed to like that better. 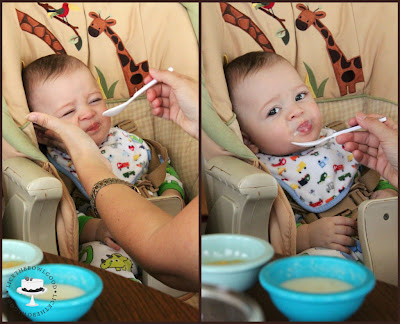 Then he got silly and started making this face which made us laugh so he kept doing it. He's such a ham. 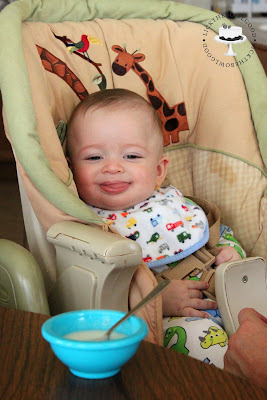 Day 3: We tried a slice of mashed banana with the rice cereal again yesterday and in return I got plenty of this: 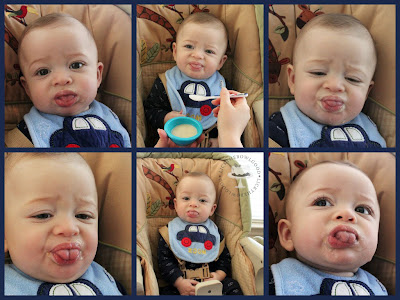 He may have stuck his tongue out in disgust after every bite, but he ate it all! 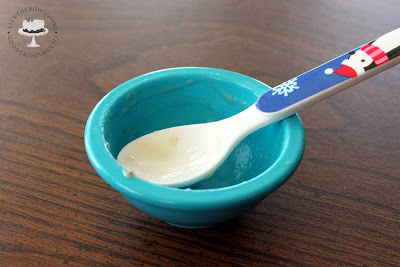 Today, Mr. h fed him, which meant half of it wound up on him rather than in his mouth, but he finished up that bowl too! We'll continue with the rice and banana for a few more days before trying new foods, but so far so good. Pears are next on the list.

Thanks for letting me share Hayden's first foods with you all. This is just the beginning of all the excitement :-). 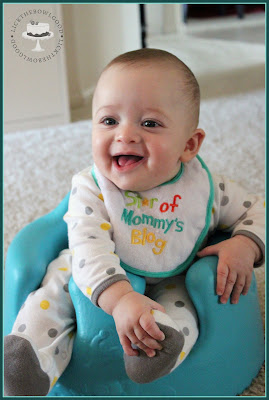 "Star of Mommy's Blog"- could not be more true.

Haha! What a cute post! I love that spoon! Soon he'll be eating up all of your yummy goodies!

Hayden has NO IDEA what food treats are in his future, but I look forward to his first "cupcake face picture" or his first "ice cream face". It is truly photogenic!!

Thanks for sharing these delightful moments.

So sweet. Mine are all grown now so it is nice to see a little one just starting out. I started all of mine on rice cereal in their bottles when they were 4 weeks old and they immediately slept through the night. The doctors all said they would be fat and all three are string beans, not an ounce of fat on them, no food allergies either. Just take it slow, not trying too many things at one time, and all will be well. Stay away from squash - can really cause stomach problems (learned the hard way), and never wear a beloved white wool sweater the first time you feed him beets, especially if he looks like he wants to sneeze! (Guess I don't have to tell you how I know that one!).

P.S. He is beautiful! When did Blogspot start with the two word verification? I must really be getting old because I can hardly read them.

Nancy- they just changed that format within the past week. I'm bit really a fan of it though because the letters just got smaller and more difficult to read and I have fairly young eyes!

And, look at that highchair... They sure have gotten fancy since my boys were babies.

So (always) happy for you!

Adorable as ever! It's so interesting to me what docs say about babies. With C, I was told to wait until he was 6 months, and cereal was okay. With H, this time, I was told to start at 4 months and to never give him rice or sweet potatoes. Sigh. They confuse a mama! (I tried cereal anyway, but he hated it. But sweet potatoes? I definitely give him those!) Now he's to the point that he'd rather eat off my plate.

Oh Monica he is just so stinkin cute, God Bless him and his mom and dad. What a beautiful little guy he is...

Loved Nancy's comment about feeding solids and sleeping through the night. Have to admit that once I found out it was true with my first, started my second on solids a little earlier :) ! Sweet pictures and fun to relive the joy with Hayden.

I love this post!!!! Hayden is so adorable. I love that you took so many sweet pictures. Thanks for sharing.

Simply adorable baby boy Monica ! Worth everything it took to get him here...God bless you all !!!

Hugs and kisses from Malaysia to Hayden!

Thank you for sharing the stories and pictures. He reminds me of my nephew who is soon to be 9!

Congrats on your precious baby! I too had a TAC performed close to 5 years ago thanks to a well known doctor in New Jersey. We now have a beautiful 4 year old daughter and we're so grateful for that surgery. God Bless!

He's just too darn cute! How can you stand it! :) I remember reading, last year, about your surgery and thinking, as I read, how much you deserved to have a full-term pregnancy this time. I am so, so glad that everything turned out great and that Hayden is all you could have imagined and more. Such a beautiful little guy! (Like that bib he's wearing too!!)

Thanks for sharing such a special moment in Hayden's life! What cute pictures of the whole thing!

So not the place to write this, but I had to share this with you... I just made your chocolate sour cream bundt cake today and accidentally forgot the baking soda. And it was even more dense and rich than when I usually make it. Sooooo delicious!!! You've gotta try it :) And the one you posted is already so delicious, I couldn't have imagined anything more tasty!

He melts my heart! What a cutie! Love his spoon =D