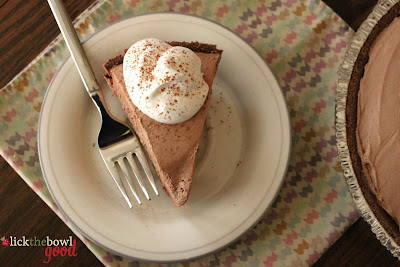 We all have bad days. Hayden happened to be having one when I made this pie back in December. I remember the day pretty well- he was fussy from the getgo. He was hungry, but didn't want to eat. He was tired but didn't want to sleep. When he did sleep, it was for 15 minutes at a time, then he'd wake up crying because I had put him down. He spit up several times throughout the day, which meant he was constantly wet and stinky. All that made for one cranky baby. 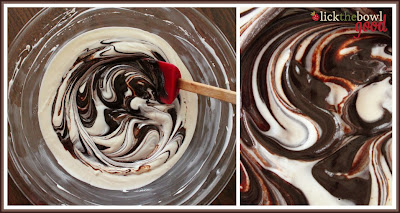 My grandma was in town and had stayed the night to help out. I think we scared her. haha! Hayden is generally a happy baby and only cries when he is tired, hungry or in pain. He doesn't just cry because he needs something to do. But that was the first time my grandma really spent time with him and I don't think she was prepared for it. This pie only takes a few minutes to put together but it took me over an hour to make because I kept having to take breaks to soothe Hayden. Melt the chocolate, take a break, stir in the cream cheese, take a break, fold in the whipped topping, take a break, pour into crust, take a break. You get the idea. 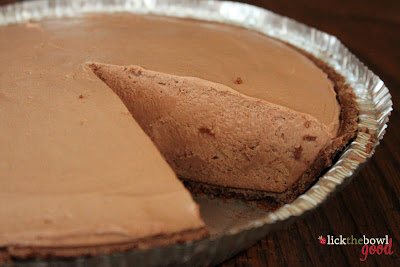 After several hours of crying baby, I had a mini breakdown and retired to the bathroom to soak in the tub in peace. Mr. H and my grandma were tending to Hayden and all I could hear from across the house was his crying. I tried to relax and just couldn't. Mr. H tried to soothe Hayden and couldn't so he brought him into the bathroom to see me. He got in the tub with me and we played in the water for over an hour. He loved floating and splashing and returned to his usual happy self. All this to say that even after a long hard day, something sweet can still come out of it and I'm not talking about the pie. 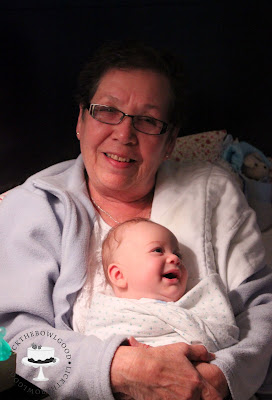 Hayden with his Great Grandma (GGma) in December 2011
This pie was creamy, slightly tangy from the cream cheese, light and mousse-like. You can switch it up by using different chocolate, or whipped cream instead of Cool Whip, just be sure to use a homemade crust- I used store bought and was disappointed in it's flavor but the filling was great. If you're having a bad day, take a break or ten, and make pie. 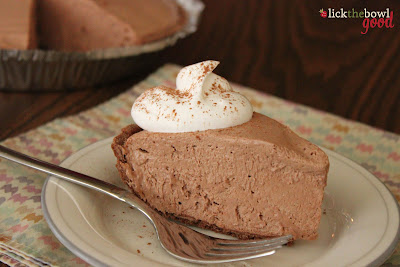 Heat chocolate and 2 tablespoons of the milk in saucepan over low heat, stirring frequently until chocolate is melted. Beat sugar into cream cheese; add remaining milk and chocolate mixture and beat until smooth. Fold in whipped topping and blend until smooth. Spoon into crust. Freeze until firm, about 4 hours. Garnish with additional whipped topping and chocolate curls, if desired. Let stand at room temperature about 1 hour before serving then refrigerate any leftovers. 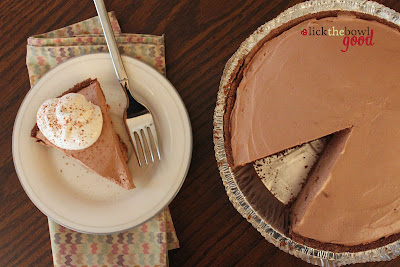 This looks delish (even if it has a not so delish name) lol. Poor Hayden...little guys just can't tell you what hurts. Could be teeth, tummy or just a bad day, but now you know the "tub trick" haha.

We ALL have bad days and your little guy is entitled to one too! The pie looks delicious like all your pies do!

Such a cute post! Love that photo of the two of them, a treasure to keep. And the pie isn't too bad to look at, either!

This looks absolutely yummy..I should try this soon...Bookmarking this one..

THat pie looks and sound delicious. I love the picture of Hayden and Grandma.

Oh my! I must make this and soon. It looks amazing and just what I need as sneaky old Aunt Flo has phoned ahead for saying she is coming for a visit. It might just help me keep my sanity and my family alive.

Thanks for sharing the great recipe.

What a sweet baby!
and a sweet dessert...I have 4 weeks until our new arrival.

This looks like a very delicious chocolate pie. It looks very much like an ice cream pie, but much fluffier and voluminous. :)

This has been one of those bad days...I only wish I had a chocolate pie to ease the stress!

I'm so glad you shared this recipe! My cousin made a similar pie a few years back and I either never got the recipe or lost it and when I recently asked her about it she couldn't remember where she got the recipe. Her recipe had white chocolate in it but I'm thinking I might like this one even better!

Uhhhh, sign me up for this. Pronto. Pinned it and can't wait to make it! Maybe I will even blog about it! Thanks for sharing.

I can clearly remember such days with both my girls....there was NOTHING I (or anyone else) could do to help them stop crying. And then suddenly they would stop - after HOURS of crying. It is so hard to not be able to soothe a crying baby - so hard! But goodness do you LOVE them!

YUM to your pie. Super yum!

looks yummy!
there is an old proverb or quote or something my grandma (i think?) told me once... if a baby is unhappy put them in water! :)
love the pictures and recipes :)

Hi! I'm from Macau. I went totally mad (too excited) when I saw this recipe and I'm going to try it out. But I can't find cool whip in my country, what can I do? Thx~:-)

Anon- you can substitute freshly whipped cream in place of the cool whip.

Thx so much! I'll try it out as soon as I finished my examination!

I'd like to make this one day in advance...do you think it will work- and how should I store it, fridge or freezer?

I'd like to make this a day in advance for a dinner party- do you think that will work, and should I keep it in the freezer or the fridge? Thanks!

I've spent the last 2 hours looking for this recipe. I made it a year ago and we LOVED it, and wanted to make it again. So glad I found it!

I have to choose this and shortly. It's incredible as well as what I want while sly outdated Auntie Flo has phoned ahead of time for saying she's returning to get a visit. It could merely let me keep my own sanity and also our kids living.