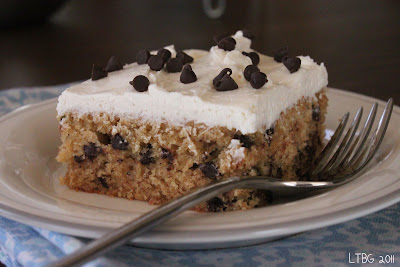 It's Cake Slice time again! Today I have a graham cracker-chocolate chip snacking cake with marshmallow buttercream frosting. Whew! That's a mouthful! I was really excited to try this cake because I'm a huge fan of s'mores and cake, but it wasn't everything I hoped it would be. It was by no means bad, but it certainly was not like a traditional s'more. Recently I made s'more bars and now this and neither have wowed me and it's leaving me questioning my love for s'mores. Or maybe I'm just a s'more purist and like them the old fashioned way. 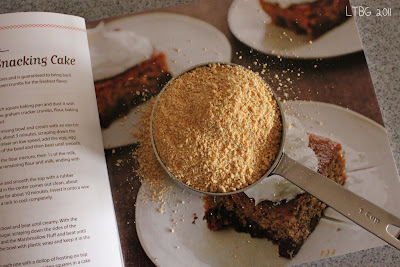 This cake was really simple to make and contains graham cracker crumbs in place of most of the flour in the cake. It then has chocolate chips folded into the batter (which was really yummy!) and baked. I opted to use mini chocolate chips instead of the regular morsels since all the pictures I saw had the chips sink to the bottom- I didn't want that. Once cooled it's topped with a silky marshmallow buttercream. I thought the frosting was better the second day, but it didn't really taste like marshmallow. The cake did taste like graham crackers but it had a bit of a spongy texture and was slightly dry, despite under baking it. All in all, this cake was fair, but I wouldn't make it again. Mr. H liked it though so it didn't go to waste, and that's always a good thing. 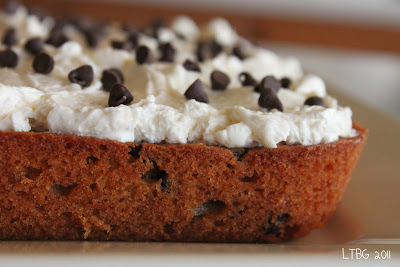 Make the cake: Preheat the oven to 350ºF. Grease an 8-inch square baking pan and dust it with flour, knocking out any extra.

Combine the butter and sugar in a large mixing bowl and cream with an electric mixer on medium-high speed until fluffy, about 3 minutes, scraping down the sides of the bowl as necessary.

Scrape the batter into the prepared pan and smooth the top with a rubber spatula. Bake until a toothpick inserted in the center comes out clean, about 35 minutes (Mine was done in 27 minutes). Let the cake cool in the pan for about 10 minutes. Invert it onto a wire rack, and then turn it right side up on a rack to cool completely.

Make the frosting: Place the butter in a medium mixing bowl and beat until creamy. With the mixer on low speed, slowly add the sugar, scraping down the sides of the bowl as necessary. Stir in the vanilla and the Marshmallow Fluff and beat until smooth.

Cut the cake into squares and serve each one with a dollop of frosting on top. 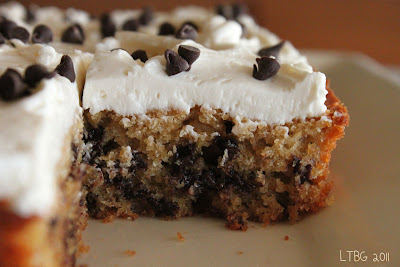 I agree entirely with what you have said - it was fine but I probably won't bother making it again.

Blog is the New Black said...

Sorry it was dry but I'm sure the chocolate made up for it! ;)

Hmm wonder if we could solve the dryness issue...because other than that the cake looks delicious!

It LOOKS amazing, but I'm sorry it didn't live up to your expectations! Hate when that happens.

It looks delicious. I've made quite a few kitchen "so-sos". But, nothing ventured, nothing gained. You've made some pretty spectacular sweets--and savories.

I took a look at the ingrediants and decided to not make this one:( I am sad but sounds like my insticts may have been spot on.

It's too bad the cake didn't end up tasting exactly how you'd hoped, but if nothing else it's at least very pretty. That should count for something, right?

What did the frosting taste like, if not marshmallow? Was the marshmallow simply too delicate of a flavor when competing with the butter or vanilla?

Yea I am with you, this cake wasnt bad but it wasnt anything worth making again. Others enjoyed it though.

Yours looks so pretty!

MMMM these look so good. thanks for sharing the recipe i'll have to give it a try.

You had me at marshmallow butter cream. I love s'mores. I'm sorry this didn't meet your expectations, but you'll perfect one. Great shot of the crumbs over the cookbook pages. Love it!

what an adorable cake, I love it.

It is pretty, but my first thought as I started reading was that it would be dry...and then you said it was! I love S'mores, but I think you can't mess with some good things. You just can't beat a simple square of Hershey's chocolate, a toasted marshmallow and a graham cracker!

Mary- the frosting just tasted like vanilla buttercream, good but not at all like marshmallow. It did have a nice texture though.

The best S'more inspired dessert I've had or made was a S'more cheesecake bar from Annie's Eats. It's delicious!
http://annies-eats.com/2010/06/11/smores-cheesecake-bars/

Your cake turned out really pretty, sorry to hear it didn't appeal to your taste :( I don't really care for smores all that much ( I think its all the chocolate, makes it too rich) but I really liked this cake. I did tweak it a little to save on calories, but it turned out good.

Agreeing over here. It was OK, but that was all. Fantastic pics :)

From the look of this, my kids would go crazy for it. Especially Claudia. Sorry you didn't love it though!

It definitely looks good! I always find the same thing, though...don't mess with perfect simplicity! Nothing beats a regular s'more ;)

Sorry it wasn't stellar, but it sure has a lovely presentation!

It sure looks pretty!! I'm with you though--s'mores purist!

Your cake looks much lighter than mine!

S'mores are my absolute favorite!!! I'm dying to try this cake...maybe for my guy's 40th birthday next week. Thanks for the wonderful recipe:)

Wow, it sure looks delicious! Sorry it wasn't all it was cracked up to be :)

Love how you used the mini chocolate chips...they look so cute on top! This too was not what I expected but I still enjoyed it.

Mmm, what a unique cake - love it!

The kids and I make Smores bars and Smores in a jar - but never had it in cake form! This looks so good! A must try - funny how I so do not like Smores - but the variations...YUM!
PS I want to take a big bite from the cookie on your header....but then that would leave you with just crumbs!! lol!

I wasn't too impressed with this cake either. Too bad. Yours looks beautiful though!

I was not a fan of this cake, but I do love your pictures. Gorgeous as always.

I just didn't get around to making this month's cake, but after all of the so-so reviews, maybe I shouldn't worry about it! I made some s'mores brownies a few summers ago. They were a huge hit. Give them a try; maybe you'll like them more than the other s'mores recipes you've tried lately!
http://luluthebaker.blogspot.com/2008/09/salute-to-summer-smore-brownies.html

I did make this cake last week but because I was so disappointed with the end result (of the cake...not the frosting) I didn't end up "posting" my experience of this cake. My cake was super thin. I did bake it in a 9x9 pan instead of an 8x8 and that was definitely not the right thing to do. It definitely looks like it would be a tasty cake - especially from the great pic's you took - but yes, it was a bit disapointing for the end result. Hopefully next month's cake will be better. :-)

I'm so sad I missed baking this month with the club. My computer is broken!
The cake looks amazing and if you didnt say in the post that it was fair, I'd be baking it for sure.

This cake sounds so good! I love that graham crackers are used basically in place of lour! And that frosting..oh yum!

Your cake looks wonderful. I love the little chocolate chips on the top. I liked the cake but wasn't a big fan of the frosting.

Everything about that cake looks amazing. I especially love that it is called a 'snack cake' which means that I could make it and just snack on it all day.