Yeast Rolls In About An Hour. No Really! 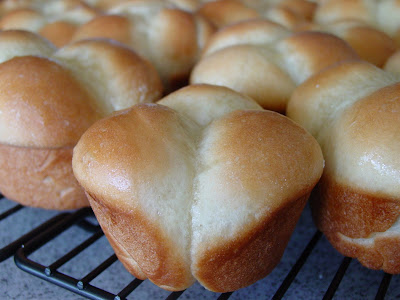 I love my KitchenAid. But I don't utilize it as much as I probably should or could. I make 90% of all my recipes in a large mixing bowl with a spoonula (love those things!) or a whisk. Why? Because I think it's easier and that's how I grew up doing things. And because that sucker is heavy and it's hard to tote around the kitchen. And because I hate hand washing the bowl. I feel that way about my Silpats too. 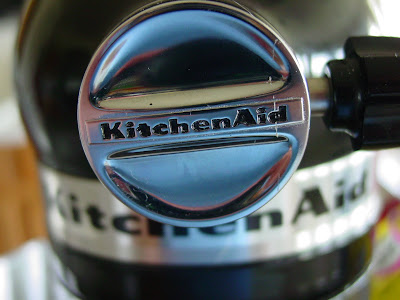 But as soon as I saw this recipe on Erin Cooks, I printed out the recipe then headed to the kitchen to try for myself if in fact the KitchenAid 60-Minute Dinner Roll was really as good as it sounded. Was I done in 60 minutes? It was more like 75 minutes because I let the dough rise a bit longer and because I took time to take pictures, but it was pretty quick for yeast rolls! 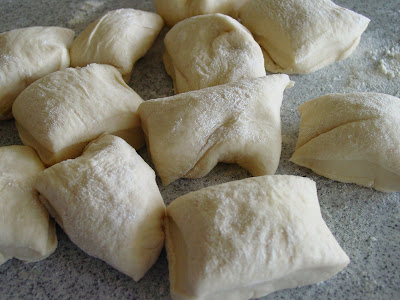 The recipe calls for 3 packets of yeast. That's a lot of yeast for one recipe, but that's why it works. It's like yeast bread on steroids and it grows and rises at a rapid rate because there's so much of it, thus reducing the time it takes to rise. There is no kneading the dough by hand. You just mix it in your KitchenAid for a couple minutes, turn it out into a bowl and watch it perform magic. 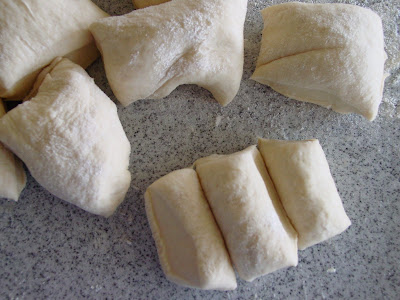 After 15-20 minutes you cut the dough into 24 pieces to form 24 rolls. I wanted clover-leaf style rolls so I cut each ball into thirds then placed them into the greased muffin tin. I liked this style because there's no need to cut the dough in half at the end. You just break apart the roll and slather them with butter. And kids think they're fun to eat. 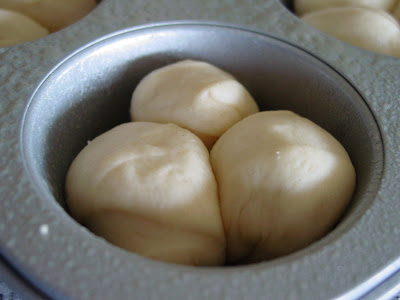 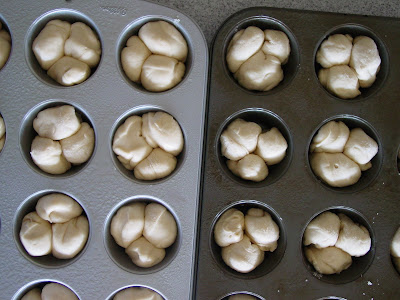 These rolls were really great especially for as quick as they were. I brushed them with a little salted melted butter at the end when they came out of the oven, per Erin's suggestion. They were buttery and toasty on the edges and soft in the inside. This made a lot of rolls (24) so we ate what we wanted then froze the rest. They were excellent reheated in the oven and they tasted fresh each time. These would be great for Thanksgiving as well. Spend a little over an hour making these this weekend and have one less this to worry about on Turkey Day! 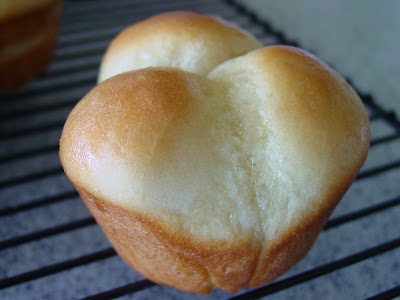 In a small saucepan, stir milk, sugar, salt and butter together. Heat over low heat until butter melts and sugar dissolves. Cool until lukewarm.

Dissolve yeast in warm water in warmed mixer bowl. Add lukewarm milk mixture and 4 1/2 cups flour to yeast mixture, and using a dough hook, mix on low speed for about 1 minute. With the mixer still going, add remaining flour, 1/2 cup at a time, and mix about 1 1/2 minutes, or until dough starts to clean the sides of the bowl. Knead on low speed for about 2 more minutes, or until dough is smooth and elastic – the dough will still be slightly sticky to the touch.

Place dough in a greased bowl, turning it to grease the top. Cover the dough with a clean, dry dish towel, and let it rise in a warm place, free from draft, for about 15 minutes (I let mine rise for about 20-22 minutes). 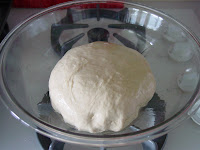 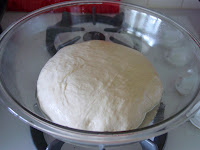 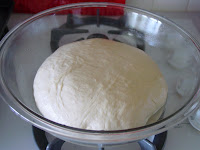 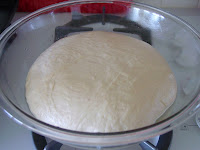 Turn the dough onto a lightly floured surface, and divide into 24 equal pieces. Then divide each piece into thirds and roll into balls. Place 3 mini dough balls into each muffin cup. Cover the muffin pan with the dish towel, and let the dough rise for about 15 minutes.

Bake at 425ºF for 12 minutes, or until the rolls are golden brown. Remove from pans immediately, and cool on wire racks. Brush with melted butter if desired. 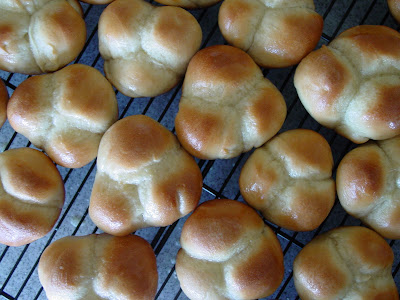 You can also shape the dough into 24 balls and set them into a greased 9x13 baking dish rather than make clover-leaf rolls. If you make the full recipe you will only be able to fit around 12 rolls in the baking dish at a time. 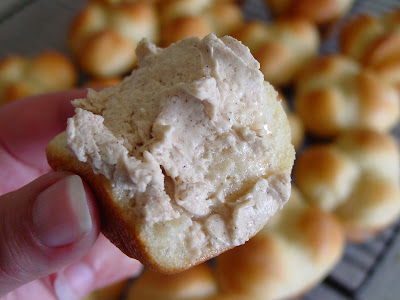 These were especially delicious piping hot out of the oven, slathered with cinnamon honey butter. Oh my goodness my mouth is watering again!

Excellent bread roll recipe (and photos). I keep my 30 year old kitchen aid right on my kitchen counter (I use it every day). Yes, its ugly, but I have a pretty quilted cover for it haha. Why do you hand wash the kitchen aid bowl? I've always put mine in the dishwasher.

My KitchenAid lives on my counter permanently - I love it that much :D

I have to get my bread making pants on very soon I think - have to stop being so lazy!!

GOR- GEOUS!!! I think I'm going to try my hand at these for Thanksgiving :)

those honetly, sounds too good to be true! and that cinnamon butter..c'mon now! I will definitely have to give these a try! Give my canned biscuits a rest ;)

They are so cute and delicous. Like little clover leaves

I adore my KA mixer. It sits on a pedestal on my counter (well, kinda). You and I are in sync with our recipes, lately... pumpkin puree and how quick rolls. These would be perfect for the PW rolls I posted.
I'm going to try these, but a question... is this fast acting yeast? That's what I use, so I wonder if my would proof all over the oven! There is nothing like homemade bread. Yummy!

Oh thank you .. this will be a great plan ahead item at Thanksgiving. It sounds not so hard, and no hand kneading. Perfectly timed post, and gorgeous photos as always!

Really only 75 mins? I have never made my own bread or rolls because for some reason the thought of yeast and the kneading just scares me. But this actually sounds do-able? Thanks for sharing...these look delicious!

ohh girl you know I waiting and a scrolling for that pic of bread with some kinda goodness on it. cinnamon honey butter...you kill me.

Monica! Thanks so much for posting this now. I dread making rolls every year as they are so hit or miss. These seem less risky that my grandmother's recipe!

Those are the kind of yummy rolls Jalen and I would stuff ourselves with leaving our dinner practically untouched.

Love, love, love the photos of the the pillowy pieces of dough!
~ingrid

You are making my mouth water! My kitchen aid never leaves my counter top I don't know what I would do without it :)

Thank you for answering my Thanksgiving dinner roll question!

I love yeast rolls but have never made them because of the time involved but now with this recipe I plan on making them. I love my kitchen-Aid so I can't wait to get started. You must have very strong arms to use a wisk all of the time. Go Girl!

Mmm... I think I'll try these. I wash my Kitchen Aid bowl (and the paddle, whisk, and dough hook) in the dishwasher. I figured they're stainless steel, so what's the worst that could happen? I've had mine 7+ years and it they get messed up, I'll replace 'em!

Those rolls are stunning, I need to try these asap! Gorgeous photos too! :)

you are SO brilliant! these look AMAZING! love how they are little bits of three!
-Mini Baker

Beautiful rolls.I love yeast breads, they have such a wonderful flavor.
Mimi

I mean how cute can you get!! This recipe goes to the top of the list! Thanks so much!

I love my Cuisinart Mixer. I haven't used my kneading tool yet. This would be a great opportunity. We love yeast rolls. The recipe looks so simple. I can't wait to try it.

Thank God I don't have a Kitchen Aid...or I'd be making these hourly!

I don't use my kitchen aid to its abilities either, and I always shy away from anything w/ yeast in it. I've gotta get over that one of these days. Maybe these delicious looking rolls will do the trick, eh?

Mmmm, they look perfect! My mouth is watering thinking about eating one right out of the oven!

I have a Kitchen Aid that I need to start using. My husband bought it a while back but I am still using my little hand held mixer. I know, crazy. I don't take well to change. The rolls look terrific...that last picture just about did me in. I want one of those rolls NOW!

You out did yourself Monica! These look so much better than mine. Simply Gorgeous! I'm so glad you enjoyed the recipe.

I'm bookmarking this for Thanksgiving, they sound delicious!

I just absolutely love your blog! It's a treat for these old eyes,,,thanks!

Brings back memories. My great aunt made the best rolls. Thanks!

This is the best and easiest recipe. I've made it several times. The first time, I was out of milk and had evaporated, so I used it and it turned out great. I use it for pizza crust and cinnamon rolls too. Fabulous and fail proof which is something HUGE for me. I'm not known for my yeast bread!!

I finally made these. I halved the recipe. LOVED them. My new go-to recipe.

I've tried other 60 minute roll recipes, but this one was the most flavorful one yet! I was out of butter, so I used extra virgin olive oil. It still turned out fabulous (I do live in Spain though, so the olive oil is incredible). So happy I found your blog! We're a military family and spent 2.5 wonderful years in Central Texas. I definitely miss it!

Delicious and so easy and QUICK to make! Thank you!

Love your blog - so many great recipes! I cannot wait to try this recipe - we love cloverleaf rolls but do not make them often because it is so laborious. Thanks for sharing this easy idea!

These were delicious and worked out perfectly! My husband said they were better than what his mom makes!

Hello I have never made yeast rolls . I have eat them . Love them so much. I so enjoyed reading this recipe. I have a 30 year old kitchen aid mixer. She sits on my counter. An she has made many many pound cakes . But never have I used it to make any kind of bread. Yall wish me luck. Thanks