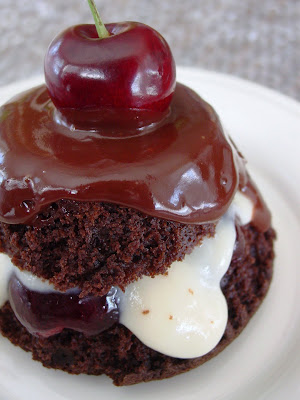 I made these cupcakes along with Ingrid of 3 B's (go check hers out!). If you'll remember, she sent me a goodie box and in it was a copy of Martha's Cupcakes. We decided since we both had the book, we'd bake a few recipes from it.

We settled on these Black Forest Cupcakes because cherries were in season and they looked so fresh and perfect. Then one day I found an email in my inbox from Ingrid asking if I had read the recipe because Martha used jarred preserved cherries instead of fresh, which defeated the purpose of making these cupcakes. 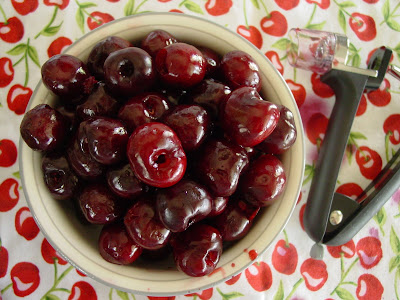 Please hold your comments about the cherries. I am aware of what they look like. ha! ha!

So we both decided we'd use what we had and make it work. Fresh won out! This recipe seems a bit fussy from all the steps but it all came together pretty effortlessly. I so badly wanted to make this into a cake rather than cupcakes, but I kept on. While the cupcakes were baking I made the pastry cream and cooled it over an ice bath, then into the fridge for an hour. While the cakes were cooling, I macerated the cherries and just before assembly I made the glaze. 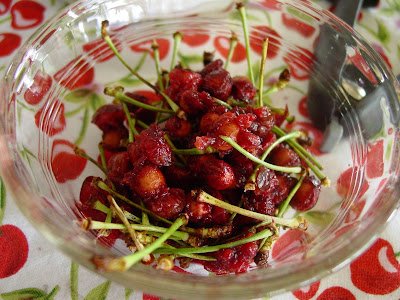 They were really good, but rich. You only need one cupcake to curb your cravings. This recipe makes 32, so we cut it down and only made 1/3 of the recipe. These would be perfect for a dinner party though- an upscale version of the standard cupcake. They were not overly chocolatey despite the cake and the glaze. They were balanced in flavors and textures and the hubs gave it the thumbs up! Lissaloo, I bet your husband would love these for his birthday! 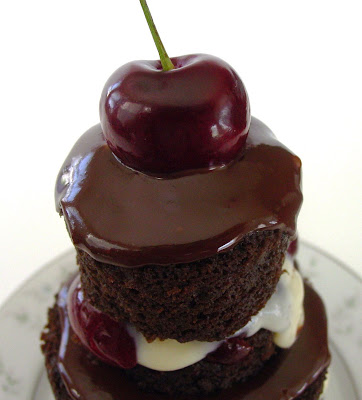 With an electric mixer on medium-high speed, cream butter and granulated sugar until pale and fluffy. Add brown sugar, and beat until fluffy. Add eggs, one at a time, beating until well incorporated and scraping down sides of bowl as needed. Mix in sour cream. Reduce speed to low. Add flour mixture in three batches, alternating with two additions of buttermilk, and mixing until just combined after each.

Divide batter evenly among prepared cups, filling each three-quarters full. Bake, rotating tins halfway through, until tops are firm to the touch and a cake tester inserted in centers comes out clean, about 20 minutes. Transfer tins to wire racks to cool completely before removing cupcakes. Cupcakes can be stored overnight at room temperature, or frozen up to 2 months, in airtight containers.

NOTE: I used fresh halved cherries macerated in a little sugar instead of the preserved cherries in a bottle and kirsch.

Whisk egg yolks until smooth in a large bowl. Combine sugar, cornstarch, and salt in a medium saucepan, and heat over medium. Stirring constantly, gradually add milk in a slow, steady stream, and cook until mixture thickens and begins to bubble, about 5 minutes.

Strain mixture through a fine sieve into a heatproof bowl. Cover with parchment paper or plastic wrap, pressing it directly on surface to prevent a skin from forming. Refrigerate until chilled and firm, at least 2 hours (or up to 2 days).

NOTE: My pastry cream was very thick so I added a little more milk a teaspoon at a time til it was a desired consistency.

Place chocolate in a medium-size heatproof bowl. Bring cream and corn syrup just to a simmer in a small saucepan over medium-high heat; pour mixture over chocolate. Let stand, without stirring, until chocolate begins to melt.

Using a flexible spatula, gently stir chocolate and cream until totally combined; begin near the center of the bowl and gradually work your way toward the edge, pulling in as much chocolate as possible, until the mixture is smooth and glossy. If not using immediately, glaze can be refrigerated up to 5 days in an airtight container. Reheat gently before using.

I just couldn't help myself, I had to make a mini layer cake! I made this with the mini pans I won from The Food Librarian. Thanks Mary!

these mini black forest cakes looks amazing! well done. I can only guess the damage of each serving.. but then again, who cares! this looks soo good!

Ha, just finished linking to your post and publishing mine! Your little cake is cuuuuuuuuute! My fave photo is the one of the pits and stems. Only you, Monica could make it look interesting (and good!)

I took some photos with a cherry on top of my cupcake but it looked dorky so I didn't publish any. Yours looks GOOD!
~ingrid

These look so delicious! I love the cute little layer cake you threw in at the end!

These look so rich but I bet so good!

Uh-maze-ing! Send me a few, please...they are so adorable :D

Your cupcakes look awesome! Glad you went ahead and used the fresh cherries!

What a beautiful (and delicious!) dessert! So elegant!
I love the chocolate and cherry combo!

I still do not have a cherry picker/pitter whatever thingee. I'll probably get one next summer or wait to till end of summer, like the idiot that I am. LOL
This must have been hard to assemble, for sure. But the photo is stellar.

How gorgeous!! Mmmm... they look so yummy! Yet another recipe found on your blog that I need to add to my list. Thank you!

Oh those look sooo good! I also saw them on Ingrid's blog. Wish I had one of those!

Wow! I stumbled across your blog today and saw these delectable cupcakes! Oh how I wish I could find some cherries! All of your food looks so good. I look forward to trying some of your recipes.

Your blog is as lovely as ever. Actually, visiting is just plain dangerous. This a beautiful and inspired dessert--I ADORE fresh cherries. Yum!

Oh Monica these look so vey amazing. I love them. And your stacked picture is beautiful!!

I bet he would have! They look wonderful! :)

ps...I have an award for you over at my place :D

Oh my dear friend!! This looks ultra-delicious. What a show stopper...PERFECTION.

Oh my...like a Hostess cupcake, but sososososo much better. My husband and daughter love Hostess, and I've been trying to think of a way to improve on them...Thanks!

That looks so yummy. I could eat that whole mini-cake myself.

IMHO, fresh cherries are ALWAYS better, no questions asked. You did the right thing, young Padawan.

So gorgeous and I love that cupcake tower! I so need to get a cherry pitter!

Wow, these look absolutely amazing. And I didn't get it for a while about those cherries, but now I do!