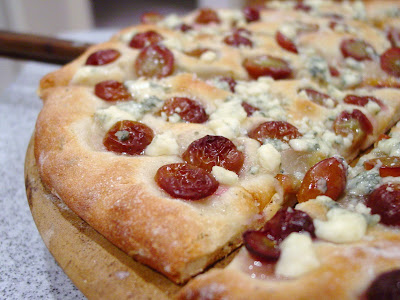 Looks like this week is turning into Honey Week! On Monday, I posted a recipe for Cinnamon Honey Butter, today it's this wonderful Rosemary Flatbread with honey and coming later in the week another honey recipe, so stay tuned! 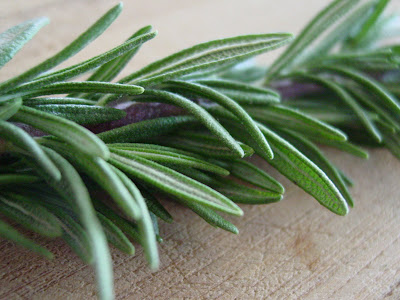 I found this recipe in Food & Wine Magazine two or three months ago and I was immediately intrigued by it's components. I set out to make it and it was so good. I ate half of it by myself in one night, and the rest of the a day or so later, reheated in the toaster oven. My husband did not like this at all. He walked into the kitchen and said "It smells like funky cheese" then left. He tasted it, but that was enough for him, so I ended up making him a sandwich for dinner. His loss. 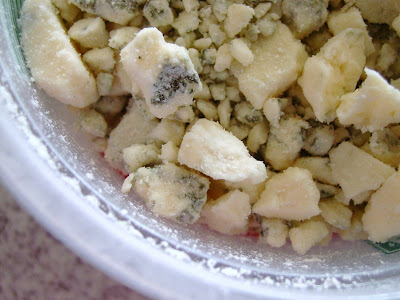 I have to tell you, the rosemary flatbread was AMAZING! It had the perfect texture, crisp on the edges, slightly chewy, substantial, but not heavy. It would make a wonderful pizza crust on it's own with a simple tomato sauce, fresh mozzarella and Italian sausage. I will definitely be making the flatbread again and again. I think my husband would like it with different toppings. I happened to like the tang of the cheese, the sweetness of the honey and the burst of the grapes, with the perfuminess of the rosemary in the background. Seriously, bookmark this recipe and make it SOON! You won't be disappointed. 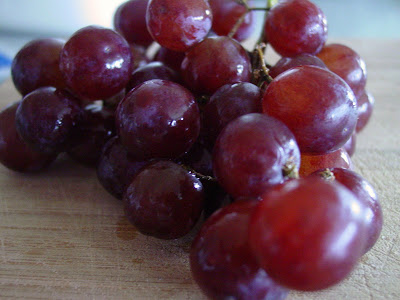 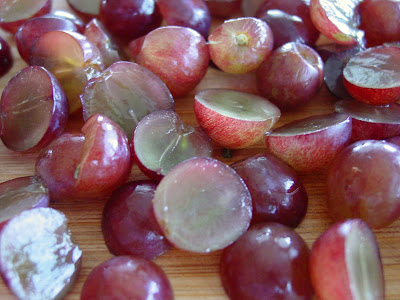 In a large bowl, whisk the yeast and sugar with 1/4 cup of the flour. Stir in 1/4 cup of the warm water and let stand until slightly foamy, about 5 minutes. Add the rosemary, fine salt, pepper and the remaining 1 3/4 cups of flour and 1/2 cup of water; stir until a dough forms. Turn the dough out onto a lightly floured work surface and knead until smooth, about 5 minutes. Transfer the dough to an oiled bowl, cover and let rise in a draft-free spot until billowy and doubled in bulk, about 1 hour.

Meanwhile, preheat the oven to 450°. Place a pizza stone in the bottom of the oven, and preheat for at least 30 minutes. 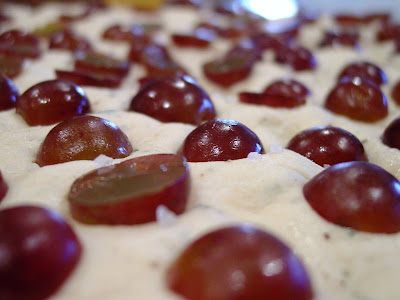 Slide the flatbread onto the hot stone and bake for about 12 minutes, until the crust is golden and the grapes have begun to release some of their juices. Sprinkle the blue cheese on top and bake for about 2 minutes longer, until the cheese melts. Slide the flatbread onto a work surface and drizzle with the honey and sprinkle with the chives. Cut into wedges and serve. 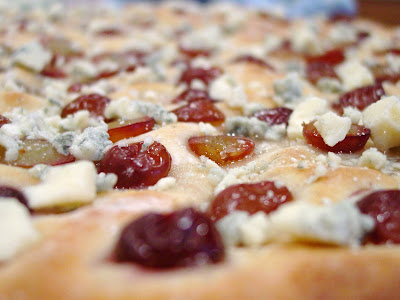 NOTE: You need a pizza stone to make this, so plan ahead. Also I used Gorgonzola because I think it's less pungent than some other blues. I did this for my husband's sake but it didn't seem to make any difference to him. He still didn't like it. 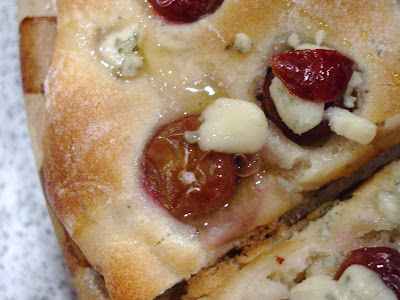 This rosemary flatbread sounds so perfectly yummy... I like something that is savory, sweet, crispy, chewy, gooey and delicious... :)

Monica. That sounds delicious. I may have to go buy a pizza stone just for this. The combo sounds wonderful and your photos are incredible.

I bet the grapes and cheese paired perfectly together.
Love a cripsy crust too. Nice choice my dear.

This sounds like a great flavor combination! I do a lot of pizza, but not so much flatbread. I think I need to expand my horizons. :)

This looks so delicious! My husband would do the same thing. He would call that girl food and walk away.

Looks absolutely delicious to me!

The last photo actually made my mouth water...will try this!

This is a good reason to get me off my butt and buy a stone!

I am in agreement though with your husband about stinkiness.

This looks sooo good and so different!!! I love the combination of grapes and cheese! I'm gonna have to try this for sure!!!

I've seen several versions of this in Blogosphere. But yours has really captured my attention. You know how I love working with yeast, so I will have to add this to my weekend baking. Love it! I also have a rosemary hedge that is out of control. Perfecto!

Baking with grapes--that's very unique! This looks lovely. My hubby doesn't like rosemary at all--he says it tastes like trees, or something foolish like that. More for us!

I need to try this. I love grapes, I bet they add something special!

Hi Monica, this is my first time posting, but I have been so gorging on your blog! I love it! Because of your fabulous blog, and the others like it, I decided to start my own. I only can hope to come close to the beauty of yours! I digress, this looks amazing, the cheese and grapes is so up my alley... anything with yeast scares me, but im gonna try this!

This sounds like a really interesting and delicious combination! Honey is such a versatile food. Great photos!!

LOL! Stinky cheese! I like stinky cheese but I'm not sure of the grapes as savory food. I'll have to take your word on it. :)
~ingrid

I am really loving the textures and flavors going on here, especially the grapes -- how cool! I don't have one of those pizza stones, another thing I need to my kitchen gadget list :D. And I've learned to never underestimate 'funky smelling cheese' ;), sometimes those are the tastiest.

Love the title of this post! I am with you that this recipe is fantastic...my husband and I actually did use the leftover dough and added different toppings the next day.