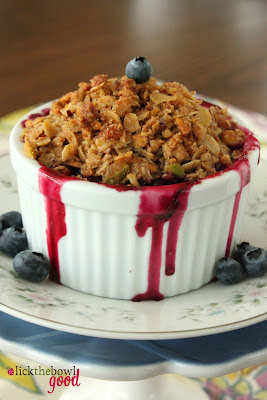 I received a cookbook for review from Ulysses Press of Grace's Sweet Life by Grace Massa Langlois. Come to find out, Grace is also a dessert blogger and blogs at La Mia Vita Dolce (My Sweet Life). I was initially intrigued by this book because it's filled with all kinds of authentic Italian desserts from Sicilian cannoli to soft amaretti cookies and panna cotta. I love a good tiramisu and gelato but this cookbook has so much more to offer. 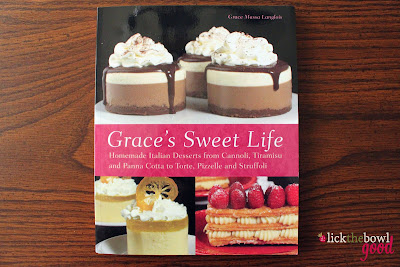 I picked up my book, admired the cover then read the intro about how Grace got her start in blogging. She says, "I spent years coming to terms with an injury that prevented me from returning to my career in business. Then when my husband passed away suddenly, I directed all my energy to my children. I needed to help them deal with the tragedy of losing their father. I had to feel happy not only for my sake but also for theirs. So I turned to cooking, because making and sharing food provided me with so much comfort. The more I cooked, the happier I was." Her daughter encouraged her to do something with her love of food and that led to her blog. I love that something wonderful came from such a devastating loss. 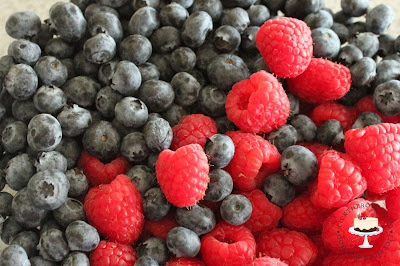 There are 60 recipes and coordinating color photos in this book. While Grace bakes all the desserts, it's her daughter, Liana, that takes the photos for her blog and her son, Matthew is the champion taste tester- it's a family effort :-). There are so many good looking sweets in this book that it was difficult to decide on what to make first. The recipes are divided up into chapters: Cakes and Cheesecakes, Mini Desserts, Cookies and Confections, Pies and Tarts, Pastries and Fried Desserts, Creams, Custards, Mousses and Souffles, and  lastly Frozen and Fruit Desserts. After reading page by page, I finally settled on a berry crumble. Did you know I don't have a single crumble or crisp recipe on this blog? It's about time I changed that! 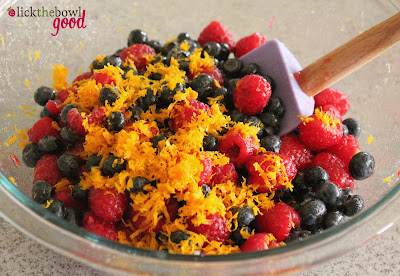 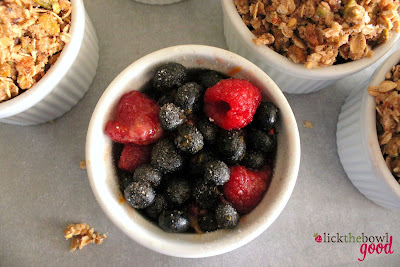 One of the first things I noticed about this book is that it is very detailed. Several of the recipes are rather lengthy and go on for several pages which can seem intimidating, but Grace just wants you to succeed so the step-by-step instructions are quite thorough for your benefit. Some of the recipes that caught my eye were: Cannoli Cupcakes with Marsala-Chocolate Whipped Cream, Italian Cream-Filled Doughnuts, Vanilla Cream with Raspberry Coulis and Cheesecake with Brandy-Cherry Sauce. A nice feature of this book is that it has little tidbits of the Italian language in each recipe, so in a way I felt as if Grace was right there alongside me in my kitchen. My one complaint about this cookbook was the font choices, the multi-colored print and the use of italics in each recipe because it made it difficult to read at times. That's a minor issue though and obviously doesn't affect the overall taste of the dessert you're making. 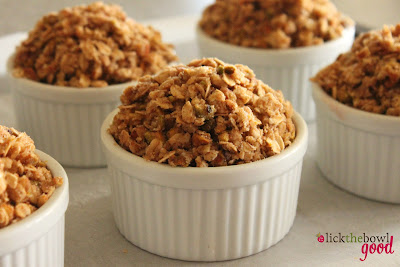 If you're looking for a cookbook with heart that is a little different than all the rest, then look no further than Grace's Sweet Life. And if  you're looking for a crumble recipe with a ton of flavor in the fruit as well as the nutty crumble, then here it is. It's also patriotic in color and would be a great dessert for any July 4th celebration. This recipe makes a lot of topping so I made a couple extra fruit crumbles. The fruit was perfectly softened and the topping was crunchy, sweet and delicious. Next time, I would decrease the amount of orange zest in the recipe since the orange flavor was more pronounced than I expected, otherwise they were prefect served warm or cold. 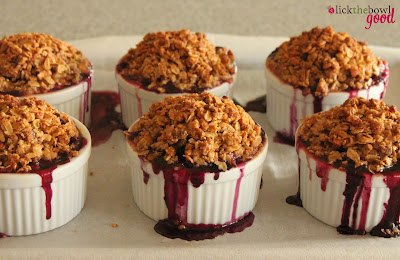 
To Make the Pistachio-Almond Crumble Topping: In a small bowl, stir together the oats, pistachios, almonds, brown sugar, cinnamon, and salt until well combined.

Rub the butter into the oat mixture with your fingertips until the butter is in pea-sized pieces. Cover and refrigerate until ready to use.

To Make The Raspberry-Blueberry Filling: Preheat the oven to 350 degrees F. Line a rimmed baking sheet with parchment paper. Butter 4 (6.5 ounce) oven proof dishes (I used 6- 5 ounce ramekins). Transfer to a baking sheet and set aside.

In a medium bowl, gently combine the raspberries,blueberries, sugar, and vanilla extract until combined. Be careful not to crush the berries.

Add the orange juice and zest, and the salt. Sift the flour over the mixture and gently stir to just combine.

Assembly: Divide the filling evenly among the prepared dishes. Sprinkle the cinnamon sugar on top of the filling, then evenly divide the pistachio-almond topping among the dishes.

Bake until the juices start to bubble and the topping is crisp and golden brown, 25-35 minutes.

Transfer the baking sheet to a wire rack and allow the crumbles to cool until warm. Serve with a scoop of vanilla ice cream or sweetened whipped cream, if desired. 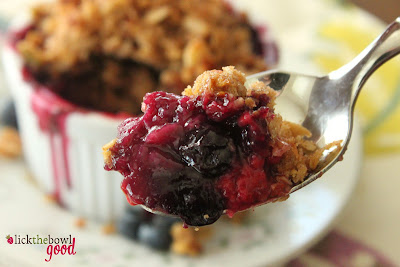 Order your copy of Grace's Sweet Life today!
Recipe Made by Monica H at 8:00 AM

The little exerpt you pointed out is so sweet. This looks like a really terrific book, especially if it's as detailed as you say it is. Sometimes when I'm making something new and the recipe isn't detailed enough I get frustrated.

Gorgeous crumble Monica! I love that you made them into mini/single serve portions...so sweet! And such a lovely review on the cookbook! :-)

Yum, this crumble looks so beautiful and tasty! Love the pistachio in the topping.

Great review and love the crumble. I've been following Gracie's blog for a while and also have had the pleasure of talking to her via emails. She is always ready with advice and is a super nice person. Her book is a must have. And man on man those pictures!!!

I'm very quick these days to get overwhelmed by a detailed recipe, so it's nice to hear that these recipes are detailed so that they're more helpful! And I love the photo of the berries and zest. So cheerful!

This book looks/sounds amazing! The excerpt is touching. I know another great blogger who started blogging out of pain as well. Love you and love this review!

I love the pics with the bright blue sauce pouring over the edge. So rustic looking, just like a crumble should be!