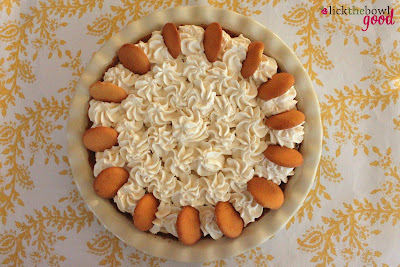 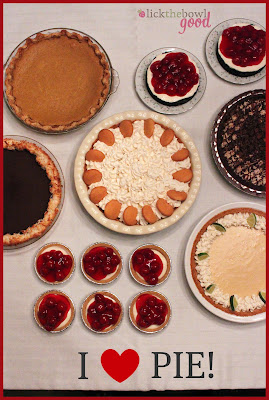 It wasn't until I was an adult that I realized what banana pudding could/should be. For years I made Paula Deen's "Not Yo Mama's Banana Pudding" until I started making my own custard. I like Paula's recipe, but when I eat it now I can taste all the chemicals and artificial flavors in the boxed pudding and Cool Whip. Now I don't eat banana pudding often, but when I do, I have to do it right and making it in pie form is right up my alley. I also made a banana pudding pie from Southern Living that was quite amazing. They're both similar in flavor, but this one was easier to make. 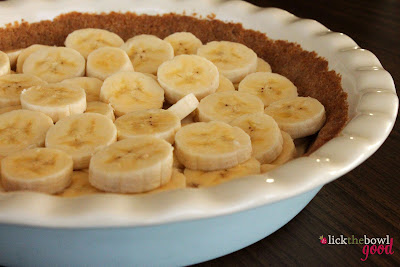 I made the crust and the filling the night before I needed it, that way on the day of, all I had to do was assemble it and make the fresh whipped cream. The custard was interesting in that all the ingredients go into the pot at once. You just stir, and stir and stir and just when you think it's never going to thicken- wham! It gets super thick. My pudding actually got a little too thick. I'm not sure if it's because of the recipe or because I overcooked it, but I just thinned it out the chilled pudding with a little milk before I assembled the pie. The end result was creamy, sweet and addicting pie. I was sad when it was all gone. My stepdad has even offered to pay me to make another one. Will do! 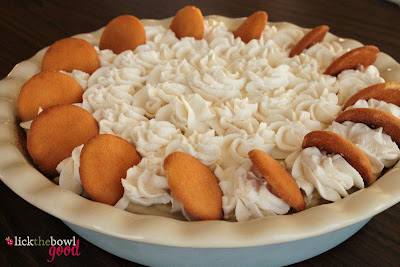 To Make The Crust: In a food processor, finely grind the cookies. Add the sugar and pulse until combined. Slowly add the butter and pulse until well incorporated and moist clumps form. Transfer to a 9-inch pie pan. Press the crust evenly into the bottom and up the sides. Bake until set, about 8-10 minutes. Cool completely on a wire rack.

To Make The Filling: In a medium saucepan, combine the cream, cornstarch, salt, egg yolks, sugar and vanilla. Over medium-low heat, cook, whisking continuously, until mixture thickens, about 10 minutes. Remove from the heat and transfer to a large mixing bowl. Place plastic wrap directly onto the surface of the pudding and place in the refrigerator and cool completely, at least two hours or overnight.

Assembly: Spoon half the cooled pudding evenly over the bottom of the crust. (My pudding was very thick, so I thinned it out slightly with a little milk prior to assembling the pie). Peel the bananas and cut into 1/4-inch thick slices. Create a layer of banana slices, reserving some for garnish. Spoon the remaining pudding evenly over the bananas. Place the pie in the refrigerator to set while making the whipped cream topping.

To Make the Topping: In the large bowl, place the cream, sugar, and vanilla. Beat with an electric mixer until soft peaks form (You want the cream stiff enough to hold it's shape but not over whipped or it will curdle.) Spoon or use a pastry bag to pipe the whipped cream evenly over the pie filling. Chill the pie until set, at least 4 hours or overnight. Before serving garnish with extra vanilla wafers or bananas, if desired. 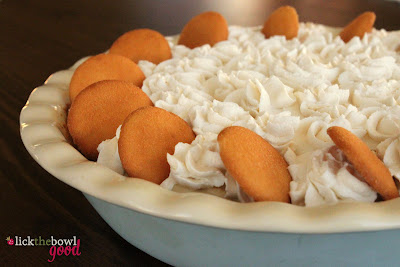 I am a banana lover so this pie is ideal for me!

I LOVE banana pudding. My grandmother always made the cooked kind with meringue on top - the best! This is a beautiful version.

This looks like something we would really enjoy. I'm with you, I do not like anything with artifical banana flavoring. I'll have to make this one soon.

Your recipes are always pictured so beautifully. Although I do not bake much anymore, (kids are gone, and husband has sugar) I really like to critique your recipes. They are all A+, as far as I am concerned. In regards to your banana pudding, maybe if you cut down on the cornstarch a little, it wouldn't be quite as thick. That's ok...... you solved the problem. Keep those super recipes coming, and keep showing us all pics of that beautiful baby.

The pie party sounds like fun! I've been looking for espresso powder at my grocery store, and they don't carry it. Is it something you had to order on line? I usually just end up using instant coffee. ~Anne

I have the same recipe except it calls for 3T cornstarch, also instead of cooking on stovetop you microwave filling and stir in increments which I think is easier. The perfect banana cream pie!

I made this today followed recipe to a T and my pudding had a grainy texture. It tasted fine but was weird can you tell me what I did wrong?
Thanks
Annettecarolherbst@gmail.com

That was one delicious banana pie! It was a toss up between this one and the key lime pie for me. This one was definitely really good!

I made this last night and it was incredible! I made it to a T except for improve on the filling, I had no cream at the time only half and half...so I added a few tablespoons of butter and used a 1/4c of cornstarch. This pie is perfect, its Heaven, I can not get my husband to stop eating it...out of the pie dish with his fork. Thank you!

Looks soooo delicious!! I think this will be this weeks desert for Sunday night dinner. Thanks for a great recipe! :)

Your photos are beautiful! Love all the backgrounds, plates, & such you use!

I made this pie for my birthday and it is presently cooling in my refrigerator. It is GORGEOUS. Don't know how much longer I can wait!!

Fantastic!, I so love your blog. The food looks amazing and delicious. I wanna try making that recipe. By the way thank you for sharing your recipe and for being so generous. I hope you could also visit my site, more fun stuff that you would actually love. Enjoy! Selamat tidur..

I think I could eat this all day long, because I love such delicious looking things :)