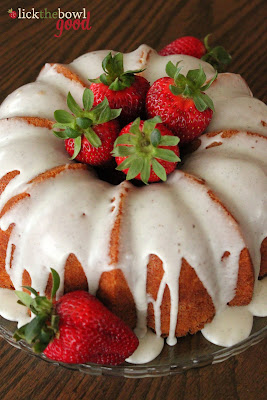 My baby brother's birthday was a couple weeks ago. Only he's not a baby anymore, he's 16 years old! It's amazing how fast they grow up. I was looking at wedding photos the other day while cleaning out the guest room (preparing it for the nursery) and I saw this little boy who was my ring bearer. A sweet boy who was no more than 4 feet tall and now he's my height. His birthday fell on a weekday, but that didn't stop him from getting his birthday wish. He wanted all of his family to get together and have dinner together at The Olive Garden. And so we made it happen. I brought the cake. 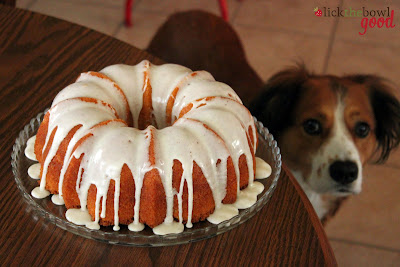 I wasn't really planning on baking him a cake, but I had plenty of time that day to make it so I started texting my mom, asking what he'd like. I had several elaborate cakes in my head, some with tunnels of cheesecake running through it, others covered in a silky ganache. My mom said he mentioned something about a pineapple upside down cake a few days prior, I could do that. But then she said she'd just pick up a cake at the grocery store so I didn't have to bake anything. Um, no. Not gonna happen! So I text my brother while at school and asked him what his dream cake would be like. His response was not what I was expecting. It was only one word: vanilla. 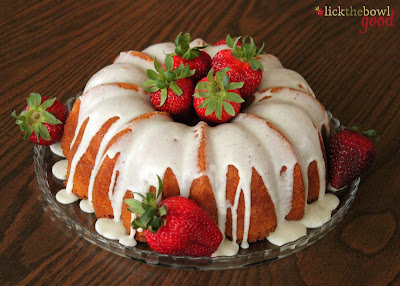 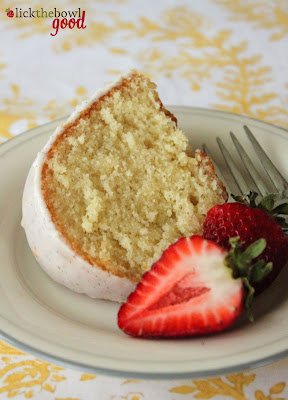 It just so happens I made a vanilla bean cake for my old boss' mother about a week prior, only she wanted peaches in it, so I made it into a Peach Upside Down Cake. It looked and smelled great, the batter tasted amazing, but I didn't get a chance to taste the final product. I licked a beater, gave another to Mr. h and vowed to make that cake again. I just didn't think it would be so soon after the other. If I was going to make a vanilla cake, I wanted it to be loaded with vanilla flavor. The cake and glaze contains both vanilla extract as well as vanilla beans, speckled throughout. It is positively vanilla! 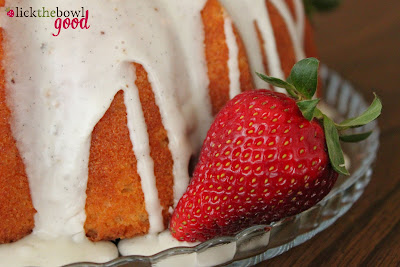 Mr. H is a huge chocolate fan and will pass up almost anything vanilla, but even he liked this cake. It was wonderfully aromatic and tasty to boot. It had a light, tender and moist crumb which I was thrilled about, because it seems so many "yellow" or butter cakes turn out dense or dry. I wanted a slightly larger cake so I increased the recipe by one and a half times and baked it in my 15 cup Anniversary Bundt. The birthday boy was pleased with his cake and even more thrilled that his family got together to celebrate his birthday. That just tells you the kind of young man that he is growing into, to wish for something like that. That's why I love him so much. Happy birthday Aaron! For the cake: Position rack in center of oven and preheat to 325°F. Butter and flour a standard Bundt pan, then spray pan with nonstick spray. Pour bourbon and vanilla extract into small bowl. Scrape seeds from vanilla bean into bourbon-vanilla mixture; stir to blend well (reserve scraped vanilla bean for another use). (If you don't have or want to use bourbon, just substitute with vanilla extract).

Using electric mixer, beat butter and both sugars in large bowl until light and fluffy. Add eggs and egg yolk 1 at a time, beating until well blended after each addition. Beat in bourbon-vanilla mixture.

Add flour mixture in 2 additions alternately with buttermilk in 1 addition, beating just until blended after each addition. Transfer batter to prepared pan; smooth top evenly (batter will come only halfway up sides of pan).

Bake cake until tester inserted near center comes out clean, about 55 minutes. Cool in pan on rack 15 minutes. Invert cake onto rack and cool completely.

For the glaze: Whisk powdered sugar, 2 teaspoons milk, and vanilla in small bowl to blend, adding more milk by 1/4 teaspoonfuls if glaze is too thick to drizzle. If glaze is too thin, add a little more sugar until it's the consistency desired. Scrape the seeds from the vanilla bean into the glaze and whisk until the seeds are incorporated throughout the glaze.

NOTE: Cake can be made up to 1 day ahead. Cover with cake dome and let stand at room temperature. 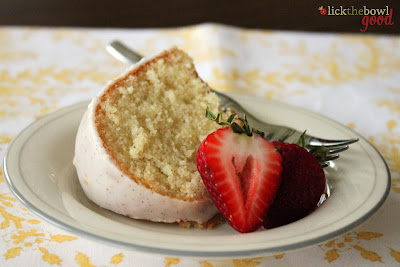 P.S. My fabulous friend gifted me with a new logo for my blog. I'll tell you all about it in the next post.

I hope everyone has a safe Memorial Day Weekend!

The cake looks fantastic, and I LOVE, LOVE, LOVE the photo of your dog checking you out, how funny.

Oh Yummy on the cake.I must ray to make this one.Happy Birthday to aaron.I'd say he also has a pretty special big sister who would go to such lengths to make a cake for him.

It looks delicious and yummy!! And you have a cute doggy!!

This cake looks so good and your dog is so cute!

I can't wait to see the logo...if it looks like your photo-name-logo-thingy...I'm gonna love it!! This cake is so beautiful, bursting with gorgeous vanilla bean specks- I love it! And it looks like your brother did, too...so sweet =)

Thanks for sharing! I love a great vanilla cake.

This looks awesome and the peach cake sounds delicious. Perhaps you could share how you adapted this cake to make that one...?

Love the look of this cake! And happy birthday to your baby brother! My baby brother is 26 now, and I still think of him as just a baby too. :)

This cake look wonderful!! I think I might just make this for our Holiday get together this weekend!! Thanks so much for sharing yet another great recipe!!

I love the classic flavor of vanilla. To me it is so comforting. Your brother is lucky to have you close by to bake him such wonderful birthday treats and to celebrate with him!

I adore this! Great recipe!

Happy Birthday to your brother :) This cake looks positively amazing! And I love vanilla glazed anything so now I really want to make this :*

1. Happy birthday to your brother.

2. Please make that peach upside down cake for me.

3. I love your logo...strawberries are my favorite fruit.

4. This cake is gorgeous and looks really yummy!

Sounds like the perfect vanilla cake to me! Happy b-day to your little brother.

you are such a sweet sister, and you have a good looking brother the same age of my son. Happy birthday to your brother... your vanilla cake is great =)


free nutritional information for your recipe

¡FELIZ CUMPLEAÑOS, AARON! BUON COMPLEANNO! FELIZ ANIVERSÁRIO! JOYEAUX ANNIVERSAIRE! HAPPY BIRTHDAY! He looks so cute in that photo. His hairs looks different from the time I saw him, and he's all dressed up! I'm so happy for him. That cake looks yummy and so inviting.

Hi, I've been addicted to your blog and have been using your recipes for ages!
I'm allergic to eggs, so I usually use an egg replacer when I bake but it never turns out exactly right.
I was wondering if you had any eggless cake recipes that you can share?
(most of the eggless cake recipes I've found are the usual plain white cake, which is never satisfying enough)
Thanks!
G

What a lucky brother you have to get such a gorgeous cake! Oh and those strawberries look beautiful too. I'll be dreaming about this cake tonight!

They grow up so quickly don't they. If your brother is 16 it means we are also getting older:D

Wow the cake and the frosting look so irresistible! Yum!

It's so apparent that you love your brother so much. There's a lot of love in that cake. So glad it turned out moist. Bookmarked!
Pssssssst. You typed "I bought the cake. Didn't you mean that you brought the cake"?

Another Great Presentation By You!

What a beautiful cake! Vanilla on vanilla sounds wonderful! I'm gonna have to get me some vanilla beans and try it sometime. You know I've never baked with vanilla beans before. I'll bet they add a tremendous flavor, and I'm not at all surprised the birthday boy loved the cake! :)

first time here, just subscribed, that lemon bar at the top makes me wish I could just reach through the computer and feast...though I think I would and could try everything you have a photo of...sending your blog to my daughter who loves to bake, just like her grandmother. I have told them, that gene skips a generation.

What a great big sis you are to make your baby brother his birthday request! Happy Birthday to Aaron! I can't wait to see your new logo :)

I am also a huge chocolate fan and hardly ever try anything Vanilla - but this cake looks very inviting and very tasty. I may have to break down and give it a try!

Gorgeous cake Monica! I can predict that your brother is going to be a fabulous uncle for "baby to be" especially from what you wrote of him in this post.

How are you feeling?

I LOVE the picture of Autumn glancing at the cake. I can just imagine the drool!!

I have a growing love for vanilla, I will have to give this one a try.

Of course your cake is (always) perfection... However, and you must expect this from a fellow cake stand fanatic... WHERE IS THE CAKE STAND!?

I have been thinking of bundt cake lately and have been researching them for cooking contests -- there are so many varieties that I am having a hard time trying to come up with something special. This is great inspiration, however.

Lucky little brother to have a sister that loves to bake!
Cheers!
Virginia O.

It looks delicious and yummy!! And you have a cute doggy!!you must expect this from a fellow cake stand fanatic...cheap rs gold