Some Call It Crack 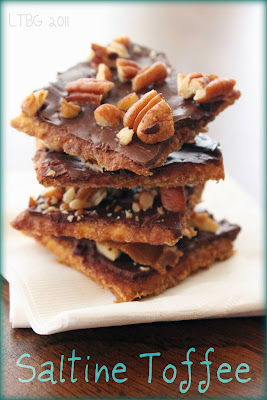 For my 100th post (2 years ago) I shared a recipe for Graham Break-Aways. It's a layered snack of graham crackers, buttery toffee, chocolate with a sprinkling of nuts on top. It's a decadent treat that my husband adores. I like them too, but I saw this recipe for saltine toffee and thought I'd give it a try. It's basically the same concept with salty crackers on the bottom instead of the grahams. And since we bought a case of Saltines from Sam's Club, I thought this was a good idea!

I did make a boo-boo when it came to the recipe though. It calls for 1 cup one butter, and I mistook that as 1 stick even though I read the recipe about 3 times as I was making it. I didn't realize my mistake until after I had taken them out of the oven- my bad! The saltine toffee was good but I'm sure it could have been better with the extra stick of butter...that's a no brainer! I liked these but still prefer the the ones made with grahams simply because of the texture of the cracker. Definitely super sweet and addicting though- some have even refereed to it as crack. Try it and decide for yourself! 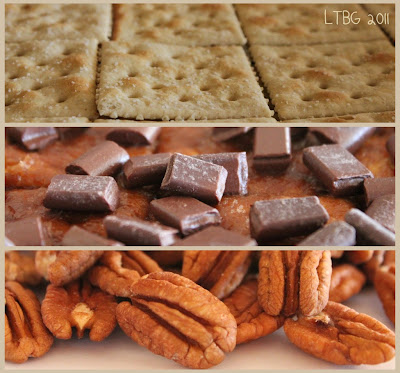 Saltine Toffee from All Recipes

Line a cookie sheet with foil and spray with non-stick cooking spray. Spread out saltine crackers in single layer.

In a saucepan combine the sugar and the butter. Bring to a boil and boil for 3 minutes. Immediately pour over saltines and spread to cover crackers completely.

Bake at 400 degrees F for 5 to 6 minutes. Remove from oven and sprinkle chocolate chips over the top. Let sit for 5 minutes. Spread melted chocolate and top with chopped nuts.

Cool completely and break into pieces. 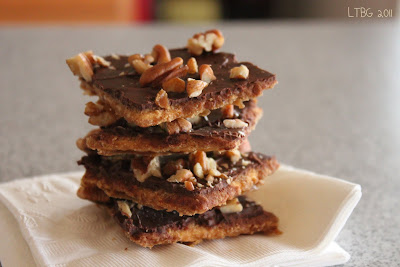 I LOVE this stuff!!! Totally addicting though;)

yummy! we love this stuff and I don;t make it often because I could eat the WHOLE pan--not good! :)

I've eaten this stuff and it is good! I'd like the try the graham cracker version.

I call this a snack! This looks amazing!

Christy {The Girl Who Ate Everything} said...

I made these for my Christmas plates but haven't gotten around to posting them. My grandma's recipe. Love these. So addicting.

I usyally make it over the holidays but knew that I could never stop at jujst one piece..it really is addictive!!!

blog is the new black said...

Yum! I would eat the entire pan...

I've only ever had these with saltines and they are most definitely like crack. YUMMMMmmmmm!
-JB

You know, I actually *just* tried a recipe very similar to this. A coworker brought in a broken/crumbled batch his wife had made and I was surprised it was based off of saltines! I really like this recipe though; another easy-but-delicious snack/dessert.

Everything is always better with more butter! :)

but I am sure these were great, I can see how they would be addicting!

I made this a while back and we ended up topping it in 3 different ways, depending on which person was doing the topping. We ended up w/ m&ms, s'mores, and toffee. Yum.

I have both of these recipes in my file, and they are true crown pleasers. People can't believe how simple they are to prepare.

Oh hey, I just noticed the new canon on your sidebar. Did you get one???
You lucky duck!! I'm afraid to take the leap into DSLR Land, but I really want to

so love this recipe - love the graham cracker one even more! Great pic!

I've seen these recently too. They look yummy. But I think I would definitely have to go with your graham break aways.

These are popular around my house at Christmas but I use Club crackers instead of saltines or graham crackers. I love the extra buttery flavor and texture the club crackers add... but I think the graham crackers would be good too and saltines are way cheaper!

something is tellimg me to try this! I have heard alot about it. Nice looking stuff!

This stuff is THE BEST!!!

If this were in my house I know that I would just be picking and picking at it all day long.....

Ohh man I love this! I always make them with graham crackers too though. And usually I top mine with white chocolate and crushed peppermints.

I love recipes this easy!

I would never be able to stop eating at just one! Crack is a good nick-name for these! Mmmm!

There's a deli where I used to buy these, made with graham crackers. For a while, I stopped there quite often to buy one, or two, or three. I had to detour to break my addiction to them. I won't make them, because I'm trying to cut back on my sweets. Plus, I know I couldn't stop. If I ever get the craving, I know where to come for the recipe.

A Truly Must Try!

I made the graham cracker version last night, yum! My husband and co-workers thank you. :) Question: how did you get your chocolate to spread so smoothly? I used chocolate chips and melted them in the oven as your directions said, but when I spread them, it just didn't come out as smooth as your picture looks. Tips?

I super love anything toffee, I have not tried these either. I think I need to make some soon! Anything that is described like crack is a must try, hahaa.

Yup, this is total crack! My grandma makes 'em with either saltines or club crackers or ritz...and they're equally addicting with any base! Now I'm craving them. Thanks for that ;)

Lubna- I don't really have any special tips for you. I just spread the chocolate out as evenly as possible so it's easier to get all the edges before it cools. Work quickly because it will start to set up. And I use an offset spatula to help spread- it's just a little easier than a butterknife or the back of a rubber spatula.

Also you know your chocolate is nicely melted and ready for spreading when it gets shiny, so watch it closely in the oven.

I like saltines on their own. With butter. But these look way too delicious. And I think I have every ingredient in my cupboard right now..........

Definitely crack - looks completely addicting and perfect for a party!

I've made these years ago...total crack! Must have now! YUM!

My Nana makes this every Christmas and it is soooooo good!

I made a similar recipe this past Christmas except instead of saltines I used graham crackers. SO, so GOOD! And yes, addictive! Serious addictive.

Oh-my-god. I search for a recipe like that since, since... I don't know when, but since a reaaaally long time ! Thanks a lot !
And by the way, all deserts on your blog look georgeous ! I can't wait to try one.

Really good ... I used Club Crackers because that is what I had and it was still delicious. I love your blog and recipes. Thank you!!!!

Every holiday I make a version of this until I can't eat any more :)
I posted my recipe with pics on a blog because people ask for the recipe a lot. Perfect mix of salty and sweet! Definitely my favorite treat.
http://randacooks.blogspot.com/

I have made this recipe many times and if you like Heath Bars then you will love these. I have done the same thing when making these and only used 1 stick of butter and they are much better with two.
Check out my web site, I really really like yours
www.smalltownkitchen.com