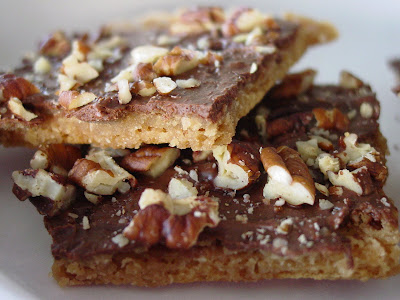 I've only made these a couple times because they are so rich and decadent and my husband and I would weigh 500 pounds each if I made them any more often. Actually I think my husband would probably weigh something like 643 pounds because both times I made them he ate the entire pan. Seriously. Last time I had two of them, this time I had 4 of them. And he, unapologetically, ate the rest :-) 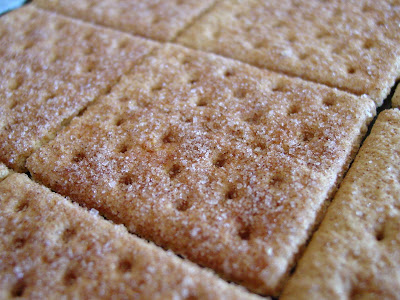 1). Preheat the oven to 350 degrees. Arrange the graham crackers (I used cinnamon grahams) in a single layer in a 15x10x1-inch baking pan. 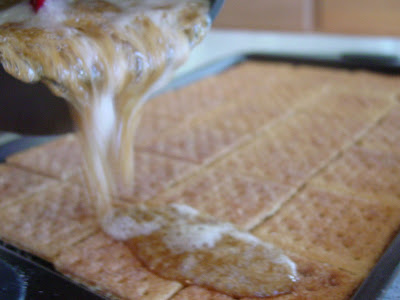 2). Place the butter and brown sugar in a medium saucepan. Bring to a boil over medium heat and boil for 2 minutes. Pour molten mixture over grahams... 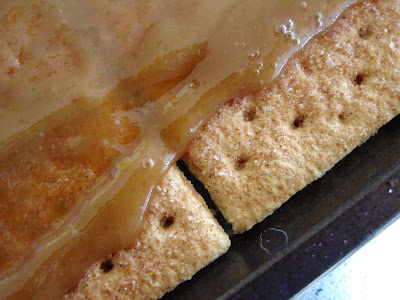 3). And immediately spread to completely cover all crackers. Basically, that means don't take time out to take pictures because the sugary lava will harden quickly and it will be impossible to spread. Bake for 6-8 minutes or until lightly browned and bubbly. 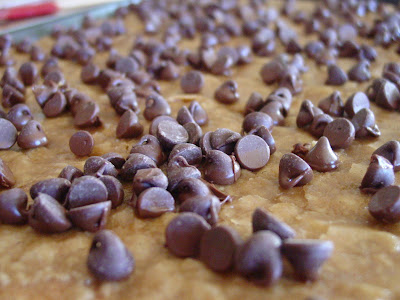 4). Once the sugar mixture is bubbly, remove from the oven and sprinkle with chocolate chips. Return grahams back to oven and bake for an additional 1-2 minutes until chocolate melts. 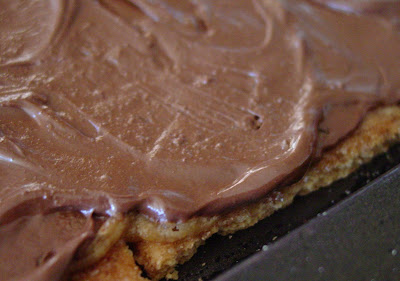 5). With the back of a spoon or an offset spatula, spread chocolate evenly over caramelly sugar. 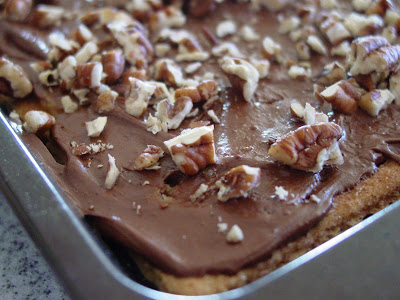 6). Sprinkle with chopped pecans. Carefully press the nuts into the chocolate so they stick, but be careful because they're HOT! 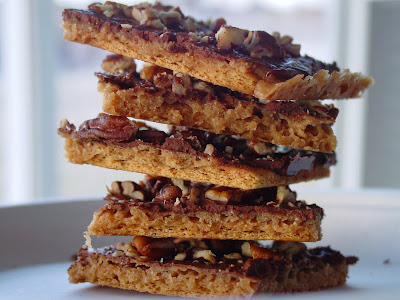 Other Variations: Substitute white, milk or dark chocolate for the semi sweet morsels. Use regular, cinnamon or chocolate grahams for the base. Sprinkle with peanuts, almonds, pistachios or even add dried fruit such as cranberries, cherries, apricots...or marshmallows! The possibilities are endless. 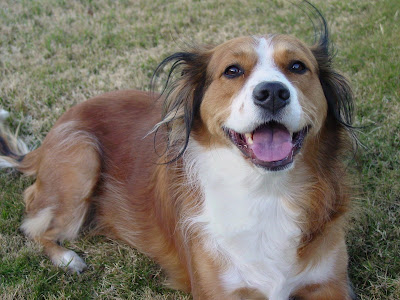 Autumn and I say thanks for reading. We hope you stick around for another 100 posts!

Happy 100th post! I have enjoyed reading your blog and look forward to many more posts! And man, that is a crazy way to make a relatively low-fat snack into something out of this world.

100 already? Wow! That was fast.
I've never tried these with the grahams.
Cute dog--happy dog!

I just made these! They are in the fridge cooling so we can eat them earlier! I almost put them outside since it is only 3 degrees!! They look very good! Can't wait to dig in:)

Wow! These look awesome and so very kid friendly. Congrats on your 100th post. Great pictures. I love them.

Those look sinful! I kind of wish you hadn't put the idea of all of those chocolate and buttery layers in my head.

I've made something really similar before using torillas and a dash of cinnamon in the toffee. They were yummy as are yours. I just made them. Fast, easy, and oh, so good they were. The kids LOVED them. The only changes I made were to use a bit less chocolate. The kiddies are not too keen on it & I toasted my pecans before adding them. Btw, I used my offset spatula to press the nuts down onto the chocolate & toffee, much easier that way.

MMM... this is the same recipe my grandma gave me. These are definatly easy and an all-time favorite :D

Happy 100th post and glad the rip off blog has been taken down.

These look yummy! I have made something similar with regular crackers, but I must try the graham crackers!!!! Thanks for sharing!

This 100 calorie sure sounds good, I am going to try it immediately.

How have I not seen this post before!?! I have been missing out! These sound and look amazing! I wish I had graham crackers in the house right now..