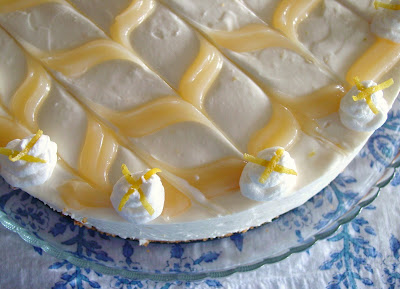 Mr. H and I are going away for a long weekend. We're not going too far but I'm hoping for some quiet one-on-one time. Well that sounds dirty, but you know what I mean :-) We're going to stay in a nice hotel, relax out by the pool- he developing his tan, me under an umbrella with a book (more than likely a magazine), listen to music, we're going to walk and explore, eat and shop. What every getaway should be like. 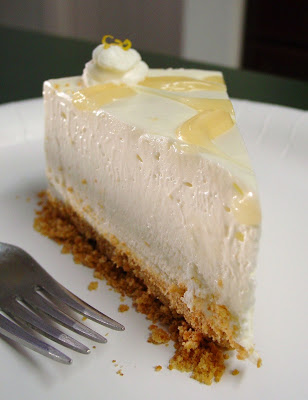 In the meantime, I'll leave you with this oh-so-creamy no bake lemon cheesecake. Sound good? Believe me, it was! And it went quick. This was one of the things I made for my mom's 4th of July BBQ. It also served double duty as my cousin's 12th birthday dessert. He and I share the same birthday and I didn't get to see him on his special day so as my birthday gift to him, I promised I'd make a cheesecake for him. He LOVES cheesecake and his parents won't spend the money or the time baking a real cheesecake so they usually buy Sara Lee frozen junk, like he got last year. 2010 brought him a Jell-O no bake cheesecake. Doh! So I felt it was my duty to bake him something homemade, creamy and made with actually cream cheese! Last year I made him Mini Cookies 'n Cream Cheesecakes and he raved about them every time I saw him, this cheesecake was no different. Even my mom couldn't stop talking about how good and creamy it was. 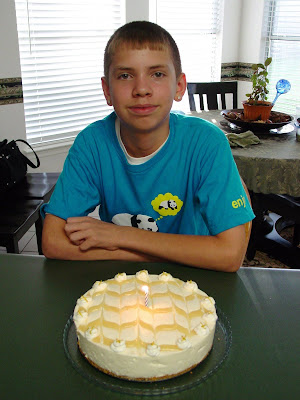 This cheesecake comes from the folks at Cook's Country (America's Test Kitchen) and they don't usually make their recipes available to the public unless you subscribe to their website. So I was glad to find it on Mel's Kitchen Cafe-- she had me at "no bake" :-) This is a no bake cheesecake but you still have to turn the oven on set the graham cracker crust. The filling is loaded with cream cheese, heavy cream and lemon curd, all set up by a little envelope of gelatin. You do have to chill it for a few hours, hence the word "icebox" in the title, but it'll be worth it. You can make it at night like I did and it will be ready for you the next day. 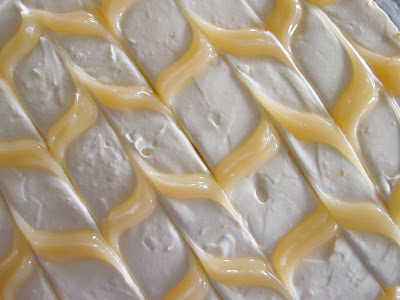 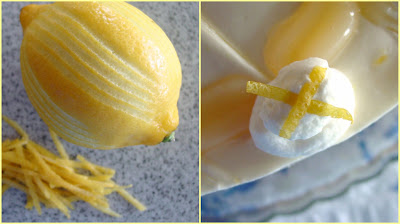 Even though I didn't have to bake this, I wanted this to be quick. I didn't have time to make the homemade lemon curd and allow it to cool, I so used the jarred stuff and it worked out fine. I made a couple changes to the recipe like adding an extra tablespoon of butter to the crust and omitting the zest in the crust and adding it to the filling for an extra zing. I also used graham cracker crumbs instead of crushing up my crackers- it was easier and I didn't have to bring out the food processor. My changes are reflected below. If you want to make your own lemon curd go ahead, if not then use good quality jarred curd and follow the directions accordingly. Either way, you'll be rewarded by a very creamy, almost fluffy, perfectly tart, lemony cheesecake. Enjoy! 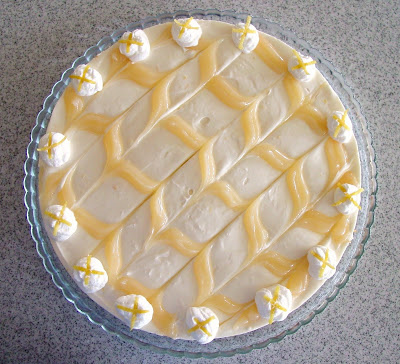 For the crust: Preheat the oven to 350 degrees and adjust an oven rack to the middle position.

In a food processor, pulse the graham crackers until they are finely ground (I used boxed graham cracker crumbs). Add the butter and pulse until combined. Alternately, the graham crackers can be crushed in a resealable bag with a rolling pin and then poured into a bowl where the zest and butter can be stirred in.

Press the mixture onto the bottom of a 9-inch spring form pan. Bake the crust until it is lightly golden brown, about 8 minutes. Cool the crust completely on a wire rack before filling.

For the curd: While the crust is cooling, whisk the egg, egg yolk, sugar and salt together in a small saucepan. Whisk in the lemon juice and cook over medium-low heat, stirring constantly, until the mixture is thick and pudding-like, about 3-4 minutes. Remove from the heat and stir in the butter and cream. Press the mixture through a fine mesh strainer or sieve into a small bowl and refrigerate until needed.

For the filling: In a small bowl, put the 1/4 cup fresh lemon juice. Sprinkle the gelatin over the top and let it stand until the gelatin softens, about 5 minutes. Microwave the mixture until it is bubbling around the edges and the gelatin dissolves, about 30 seconds. Set aside.

In a large bowl with a handheld mixer or in the bowl of a stand mixer, beat the cream cheese, lemon zest, sugar, and salt until smooth and creamy, scraping down the sides of the bowl, about 2 minutes. Slowly add the cream and beat until the mixture is light and fluffy, about 2 minutes. Add the gelatin mixture and 1/4 cup of the refrigerated lemon curd. Beat until the mixture is smooth and airy, about 3 minutes. Pour the filling into the cooled crust and smooth the top.

For the decorative topping: Using a teaspoon, dollop the remaining curd on top of the cheesecake and lightly drag a pairing knife or skewer through the lines to create a marble appearance. Alternately, you could pipe the curd (I put the curd into a Ziploc bag, snipped the corner and piped) into lines or swirls and drag a skewer through it to make other decorative patterns.

Refrigerate the cheesecake until set, at least 6 hours. Remove the sides of the pan, cut into slices and serve. 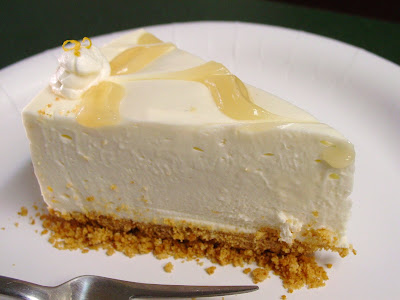 NOTES: The cheesecake can be made ahead and refrigerated for up to 3 days. To create a clean slice of cheesecake, dip your knife in a glass of hot water, dry it, then slice the cheesecake. Do this for each slice.

*Do NOT substitute the heavy cream for half 'n half or milk. You need the fat in the cream to whip up and provide body and texture to the cheesecake. Milk will just thin out your batter and it won't set properly. 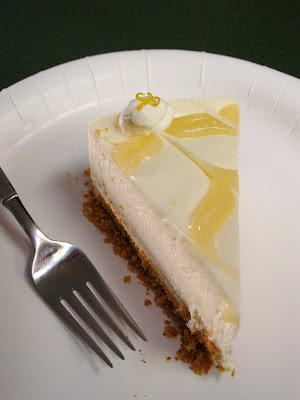 Mmm! See y'all next week!

I don't normally like cheesecake but I love lemon!! I may have to give this a try.

Have a great getaway weekend!!

this looks really good. We love lemon anything in our house.

Oh, that looks awesome...anything with lemon curd and I am IN!! Have a great little getaway =)

This looks so refreshing and yummy! Have a great weekend away...I love those kind of trips!

I'm a huge fan of no bake desserts...esp when its almost 100 degrees in St. Louis! This is so beautiful too!

Mmmmm, is right! This screams summer. It looks so cool and refreshing. My jaw is tingling looking at it.

Hope you guys have a fabulous weekend! :)
~ingrid

Yummy, I love no bake cheescakes, and this one with lemon is just fantastic!! Thanks and have a good trip!! :)

I've been craving something lemony!! I'm on my way over for a slice!

(Have a wonderful getaway and enjoy your one-on-one time too!)

Hope you have a wonderful getaway! The cheesecake is a thing of beauty :)

OMG! I saw this recipe and bookmarked it. I WAS so going to make this. But, Monica, you have made a masterpiece. Darn, you're good! So glad you two can get away and relax. Wishing lots of smooches, hand-holding and romance.
Wistfully,
Debby

Have a great time! Your a wonderful cousin to make a cheesecake like this. It looks beautiful and sounds deliciious and the easy part makes it even better:)

That looks incredible dreamy and perfect for summer! I also love your post before this one, that fudge looks to die for!

Oh my goodness, your pictures are amazing! I wish my decorated cheesecake had looked as pretty as yours...lovely! And you are a nice cousin to break this out for the birthday! I'm really glad you liked it.

Oh my..that's all I can say. I so love anything lemon..or cheesecake. This could be dangerous. LOL

Have a great getaway!!

Oh, I wish I could decorate as well as you do!! This cheesecake looks perfect.

Have fun on your vacation you two!!

Sweet Monica....have a fabulous fabulous time this week-end! I just wanted to let you know that every time I discover that you have posted a new recipe on your blog I jump for joy! No matter what you present to us (out here in blog land) I always fall inlove with the recipe....you put so much hard work and love into it that it just oozes with beauty and happiness. Thank you so much for all that you do to make me so happy when I see you have posted on your blog! Happy Happy Weekend!

p.s. I am seriously thinking of purchasing the same camera you have...I keep on looking into it but have yet to make the plunge. :-)

Have a wonderful weekend Monica! How sweet of you to make your nephew that cheesecake. He will always remember that I'm sure. Great recipe for this time of year!

Yum, Yum, Yum, Yum, YUM!
Lemon desserts are my favorite, and you know cheesecake desserts that are no cook to me are way more tasty and refreshing that the cooked kind.
I am so making this one!

oh wow! This looks so yumm! The no-bake is even better!
Have fun on your not-so-dirty weekend getaway!

This looks perfect for a summer bbq. I'm sitting here wishing I had 3 blocks of cream cheese just sitting in the fridge waiting to be turned into something amazing.

Hope you and Mr. H. have a wonderful weekend, Monica!

It looks delicious! Great job! Hope you had a great weekend! I'm new here and I will be back to see what's cooking!

Yay for no bake - looks great! Hope you had a wonderful trip!

wow, simply wow. everything looks amazing! Great photos and great food no doubt. following from another blog that linked to yours ;)
so glad I followed

If you're hopping today come see me
Christy Home-Mom

I just made this cheesecake last night! It's a fabulous recipe and the little additions you have added to the recipe make it even better! This really is the best cheesecake I have ever eaten, it's not too rich and heavy and it's not too fluffy either. I truly appreciate all of the hard work that you put into your blog. It's always wonderful to read through your blog, look at your beautiful pictures and find some recipe that I hope to make someday. Thanks for sharing this great recipe!
-Abbie

I made this for our Easter dinner and it was a huge hit! I will definitely be making it again. Thanks for the post.