Along with lemon poppyseed cupcakes, I made this self frosting angel food cake to take to my mom's house for Mother's Day brunch. I had some egg whites left over from the lemon meringue pie I made so chose this simple cake. And unlike most angel food cakes, it only calls for 6 eggs whites and it's made in a 9-inch Pyrex dish. Genius! 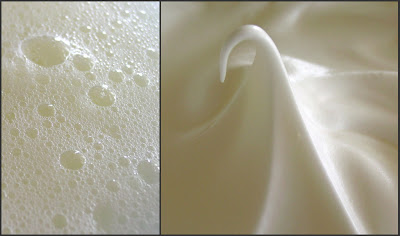 Seriously, how genius is that? Have you ever heard of an angel food cake made in a Pyrex dish? No, me neither and that's why it appealed to me. It took away all the pressure of making a tall daunting impressive angel food cake by making it into a snack cake. It's mildly flavored with vanilla and almond extracts and it's topped with sweetened shredded coconut. As it bakes, the coconut gets imbedded into the cake and becomes slightly crunchy and golden, thus forming the self frosted part of this cake.

This cake was very quick and simple to put together. Like other angel food cakes, this one was light and airy. It was firm and and spongey, with a light sweetness. The coconut on top added a differing texture to the soft interior. Both my mother and monther-in-law love angel food cake, and while it's not my favorite, this was for them. All in all, I'd say that it was a success.

Preheat oven to 325 degrees F. Position rack in the center of the oven.

Beat egg whites until foamy. Add the cream of tartar and salt. Beat until soft peaks form. Gradually add the sugar, 2 Tbsp at a time, beating until stiff peaks form.

Bake for 30 minutes, or until a wooden pick inserted in the center comes out clean. Cool in pan about 40 minutes. Remove cake from pan and cut into squares to serve.

If you haven't already, go enter my cookbook giveaway!

I'm not a fan of Angel Food Cake, but I must say your cake is lovely.

This looks heavenly! haha get it? Heavenly! But it truly looks yummy=)

I can't wait to make this...it looks so fluffy!!

OK now this cake is calling me! I love angel food AND coconut and never thought of the two together - DOH!

Thanks for posting - I'm printing it out right now.

That is a Beautiful angel food cake! Thanks for offering an alternative to the scarier version!

Oh yum. This looks fabulous AND easy. Definitely making it!

Wow...I'm fascinated by this cake. Love the simplicity and the "yumminess" (from your pic's) - did you serve it with fruit?

Not quite what I was expecting when you said you made angel food cake but it's kinda cool none the less.

I'm not a big fan of angel food cake either. Unless of course it comes topped with fresh berries and whipped cream then I can struggle through it.
~ingrid

I've always felt a little intimidated by Angel Food Cake. But yours looks easy and delicious! ;)

I made this very recipe and it turned out really dry for me. I took great photos, but never blogged it. I'm going to try again, and try baking it for a shorter time. It was super easy to make, I'll admit it!
Miss you, girl. I'm so busy at work, I can hardly find time to relax. Off to sleep now!
xoxo

Thanks for this great angel food cake recipe. I have never made one before because it took too many egg whites. This one is worth trying.

Monica this looks lovely. I adore Angel Food Cake and have been missing it over here as I don't have an angel food pan. This is the perfect thing to settle my cravings and as a treat for my hubbie who has high cholesterol! Thanks so much! xxoo

AVRIL- No I didn't serve it with fruit simple because we had cupcakes and fruit salad on the dessert buffet. But berries and whipped cream with this would be really good!

awesome with the coconut!! and not having to bust out my angel food cake pan?...win ~ win!!

Yes! Thank you very much! I'm having a dear friend visit for a few days in June and I like to have light meals on hand for lunches. This, coupled with fresh berries, will be our treat one of the days. I agree that an angel food cake can be daunting when pulling out the "big guns". This is perfect.

This looks absolutely delicious. And I love the pictures! It looks like those beautiful squares of cake are going to float right off my screen!

I love that this was baked in a pyrex! I love angel food cake but never want the hassel with the tube pan. Love it! This looks light and fluffy. Bet everyone enjoyed it!

I don't really care for angel food cake either but this does look yummy! The coconut on top is a great idea. Thanks for sharing!

I love this idea!! Sounds really light and delish:)

wow! I love it! I'm hoping I end up with some extra egg whites JUST so I can make it ;)

I love angel food cake (minus the coconut, though the idea of all-in-one cake is great). What I like best about angel food cake is that you can cut yourself a big (fat free) slice and just walk away with it. No silverware or plate required. teehee

Looks delicious and not too heavy for the summer time!

Hi Monica, I have given you an award. Please visit my blog for details.

YUM! Angel food is one of my favorites...and I love coconut...this sounds perfect =)

You make everything look so pretty! I love this. I love angel food cake but agree it is kind of a pain to make. My problem is always how to cover it once it is cooked to keep it fresh because it is so tall. I love that this is cut into little squares. Thanks for sharing this awesome recipe!

Angel Food cake is one of my all-time favorites, and one that I always requested as a kid. I like the idea of baking it in a Pyrex dish, too. So simple!

The coolest snack cake ever!

Hello! First off, let me say just how much I enjoy your wonderful blog! I'm a regular reader to always looks forward to your unique recipes and posts. Therefore, I come to you with a recipe void I am in need of filling, and I hope you can help me out. My father loves Cap'n Crunch cereal, I mean LOVES it. For christmas each year, his sister always gets him a box - silly family tradition, but so much fun and great memories. So with father's day coming up, I would love to bake him something special...something with Cap'n Crunch cereal in it! Maybe a pound cake or a cookie?

But, aside from just having the cereal as an ingredient, I want this item to truly TASTE like the cereal - that's key here :) So, I hope you can use your special baking skills and think up something yummy for the most important man in my life, my father. Thank you for your time!

Monica, this looks so good! I was raised on homemade angel food cakes for all special occasions. Such a light treat! I have been trying to click on your email link and I can't seem to get through. Do you have my email still? Thanks, Roz

Monica, this looks so good! I was raised on homemade angel food cakes for all special occasions. Such a light treat! I have been trying to click on your email link and I can't seem to get through. Do you have my email still? Thanks, Roz

I love the idea of an angel food cake in an oblong pan! My oven gives me trouble with angel food cakes made in a tube pan (overly dark top or bottom depending on rack height), so this gives me hope that I will be able to make one in my oven very soon. You may see this on my blog!

love this idea of bite size pieces of angel food cake, it really is made in heaven.