So easy. So cinnamony. So good.

ETA: I've received a lot of comments asking where they can find cinnamon chips. I found mine at the local grocery store but they can be hard to find. The brand I used are by Hershey's and on their website is a product locator. King Arthur Flour Co. also carries a mini chip version. 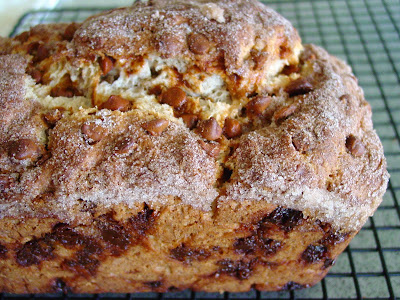 Oh my goodness, is this cinnamon bread good! I found it on the King Arthur Four Blog awhile back and it peeked my interest almost immediately. I mean, come on, it's loaded with cinnamon chips and topped with cinnamon sugar. What's not to like? It smelled heavenly too while baking. It was awesome warm right out of the oven and stayed fresh for a couple days. After that it got a little stale but was just as good toasted. 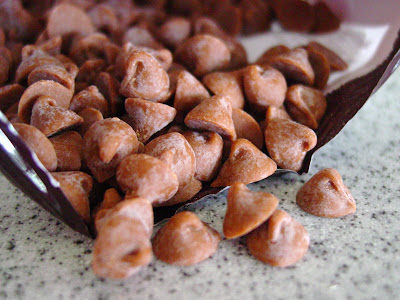 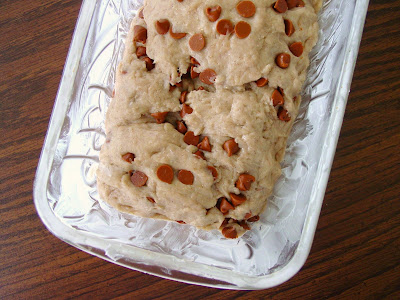 It's a cross between a yeast bread and a quick bread. It does contain yeast but there is no proofing or kneading involved. You just add the instant yeast to the dry ingredients and mix it all together. You do have to let the ball of dough rest for a bit but in that time you can blog a new recipe :-) 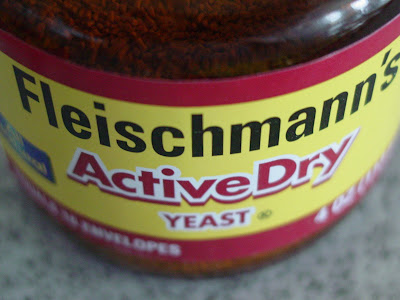 The recipe calls for instant yeast but I only had regular yeast so I emailed the KAF customer care people and they got back to me promptly. This was their response, "You can use active dry yeast in almost any recipe calling for instant yeast. You just need to proof it first in some of the liquid from the recipe. You do not need to make any other changes to the recipe. Rise times will depend on the temperature of the dough, and the temperature of the room. It is best to go by the look of the dough, rather than the clock." 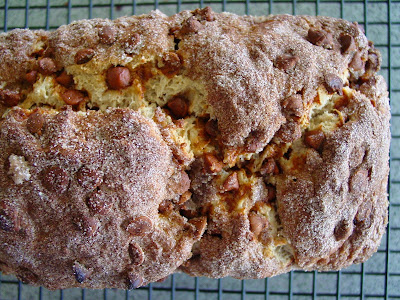 That's another thing about KAF that I love because they want you to succeed! They want you to try their recipes and they make sure that the formulas they provide you are going to work. They double and triple check them to be sure what they are providing you is simply the best. And what more can you of a company that has been around since 1790?! The KAF blog- Bakers' Banter- is amazing too and they provide step by step instructions and pictures. Be sure to stop by and what they're baking if you haven't already. 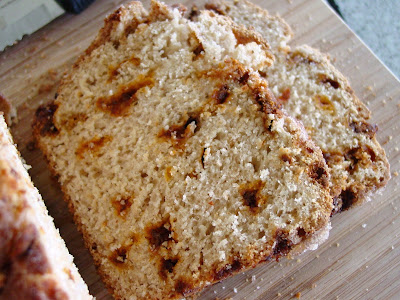 In a large bowl, mix together the flour, sugar, yeast, cinnamon and salt. In a separate bowl, whisk together the milk, butter, and egg. Combine the wet and dry ingredients, beating till smooth. Let the batter rest at room temperature for 1 hour, covered, then stir in the baking powder and cinnamon chips.

Spoon the batter into a greased 8 1/2 x 4 1/2-inch loaf pan. Sprinkle the top with the cinnamon-sugar.

Bake the bread in a preheated 350°F oven for 35 to 40 minutes, until it tests done; a cake tester inserted into the center will come out clean. Remove the bread from the oven, let it rest in the pan for 5 minutes, then transfer it from the pan to a wire rack to cool completely. 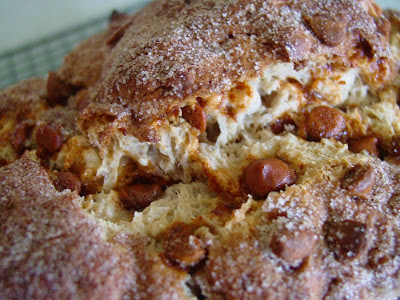 NOTE: Don't slice the bread while it's hot! It'll slice much better when it's completely cool.

While this recipe calls for instant yeast, the good people at KAF say that active dry yeast can be substituted. Just be sure that if you're going to use the active dry yeast that you proof it in the warm milk prior to adding it to the dry ingredients. 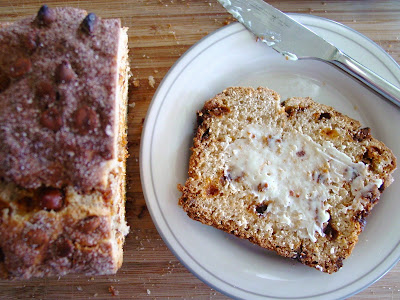 This would be a wonderful treat on Christmas morning.

Cinnamon chips though? Where do I get? Perhaps I've been living on other planet?--never heard of them!

PRETTY new template! I loved your other one too. Can tell you have lovely taste.

And am in love with Autumn & August! You're hubby's cute too!

Thank you for the white chocolate info! That cleared up the confusion!

IF you and I both move to Vermont, we'll by vying for a job at KAF. As you know, I love this company! I could shop here all the time. Wait! I do! I spotted this bread and bookmarked it. I never realized how much you adore cinnamon. Ya know, I love both Fleishmann's and SAF Instant Yeast. As usual, you did a fantastic job! Man, I can already imagine the smell of this bread. Amazing!

I saw the title of this and I already knew I would be making it before I read a single detail! Cant wait...looks delicious!

Awesome ~ finally found the elusive cinnamon chip! this looks like the perfect recipe!

I love anything baking with cinnamon in it...smells so good. I've never used cinnamon chips, but they do look delicious in this recipe. Yum!

I love this bread too! I have made a few times now. Just this past weekend, I made it with mini-chocolate chip with vanilla extract instead of cinnamon...AMAZING!!! Your bread looks much prettier than mine though...:)

That does sound like the perfect breakfast for Christmas morning! Yum :)

I never heard of these chips but it sounds so good. I made cinnamon buns this week and wish I had this recipe then. I enjoy your blog and your writing so very much. Thank you for sharing.

Oh my .....that bread looks to die for!! I happened to come across some cinnamon chips awhile back and bought a couple of bags. I've been waiting to use them on something special and this is definitely the right recipe :D

Monica that looks fantastic! Just the kinda thing my family and I would love especially if I add caramel, banana, and nuts on top. LOL, just kidding! It looks delish just like that. This is the kind of dessert that has you picking at it as you go by or make excuses to go into the kitchen for. Mmmmm, especially that yummy crunchy cinnamony top.

:( I didn't make this last night I made another recipe that I saw earlier in the day that was supposed to be a cinnamon roll but in muffins form and it used yeast. I should have gone with your recipe. The other has tons of potential if the cinnamony goodness doesn't bake off the top and on to the cookie sheet. :( Ooops.
~ingrid

Gimme a glass of milk and pass the butter! Looks delicious!

Monica,
Thanks for taking this one for a test drive. I am glad that you had fun experimenting with it. Frank @ KAF. baker/blogger

I'm on a mission to find cinnamon chips now. I bet this would taste good in a bread pudding once it went stale too.

if there's anything in this world that'd motivate me to hassle with yeast, it's the prospect of cinnamon-chip laden cinnamon bread. heavenly.

Monica ~ I just bookmarked this and can't wait to get a chance to make it. Think it'd freeze well? I'd love to make it to take to my parents' house for Christmas. I'm curious about it using yeast, but not needing kneaded. I like that, for sure!

As always, this looks gorgeous! Mmm. Like others, I haven't used cinnamon chips before. Are they creamy, like chocolate chips, or are they more candy-like?

Holy. Canoli. This looks outta this world! I am sooo making this. Once I find cinnamon chips. :)

I did not even know that cinnamon chips existed but it seems fantastic! :)

Oh wow, between all that c/s on top and the cinnamon chips I'd be in heaven! It looks absolutely amazing!

Wow the bread sounds fantastic! I love cinnamon so this sounds like heaven. I love how you can toast it too, i bet that tastes delicious

You're blog should come with a warning label: Caution...tempting recipes and beautiful pictures will make you hungry! :D

Being that I can't find cinnamon chips, would this taste good without them?

I have NEVER seen cinnamon chips. Please reveal your source!!

Just made this bread, and WOW! Yum-o. Kids loved it as well. Crunchy on the top from the cinnamon-sugar and sweet middle. I don't know if the loaf will make it a few days with me nibbling on it throughout the day but we'll see...

Thanks for posting the recipe!

Well, I now know what I have to look for next time I at the market (which seems to be every day!) - Cinnamon Chips! I actually think I've seen them before....just have to remember which store I saw them in now. :-)

I love cinnamon ANYTHING! This looks delicious... not sure if they'll have cinnamon chips in Australian supermarkets just yet - we only just discovered pomegranate heehee x