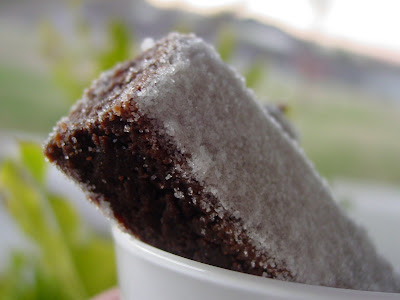 After a few days of not baking, I NEEDED to bake something and I didn't have any eggs. You can make many things without eggs, but you can't bake much without them. Then it dawned (donned?) on me that I could make shortbread. But I made shortbread stars for the holidays, and while they were very tasty, I wanted something different. So cinnamon-y chocolate shortbread it was.

I whipped everything up in a matter of minutes and hoped to be eating a sugary finger shortly after, but it didn't happen :-( The recipe says to bake the shortbread in an 8x12-inch pan. I only had an 8x11. I didn't think it would make much difference but they took forever to to bake. I don't know if it was all me, or if the recipe just isn't right on the timing. Despite what she may think, Martha is not perfect. I blame the recipe.

I kept running back to the oven every 5 freakin' minutes to check if they were done. The first couple times it wasn't a big deal, but every five minutes for 30 minutes is 6 extra times to the oven. Not fun. I was starting to resent these cookies and it was a shame because they were smelling SO good. I think next time (because there will be a next time) I'll bake them in a 9x13-inch pan. They may be a little thinner, but it'll be worth my sanity. Don't you think? 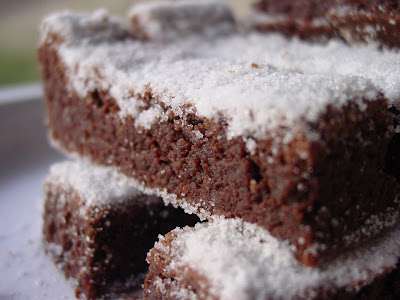 Preheat the oven to 325 degrees F. Butter a 12 by 8 inch rimmed baking pan and line with parchment paper, leaving a 1-inch overhang on the long sides; set aside.

In a medium bowl, whisk together flour, cocoa, cinnamon, salt and baking soda until combined. In an electric mixer fitted with the paddle attachment, beat the butter and 1 cup sugar on medium-high speed until light and fluffy, about 3-4 minutes, scraping down the sides of the bowl. Add flour mixture, and beat on medium speed until just combined.

Using a small offset spatula, evenly spread dough in prepared baking pan. Chill in the freezer until dough is firm, about 15 minutes. Prick dough all over with a fork; bake until just firm to the touch, about 20 minutes*. Transfer to a wire rack, let cool a bit. Then while still fairly warm, use a large knife to cut shortbread into 4 by 1 inch pieces. Sprinkle with granulated sugar. Cool completely in pan. Can be kept in an air tight container for up to 1 week. 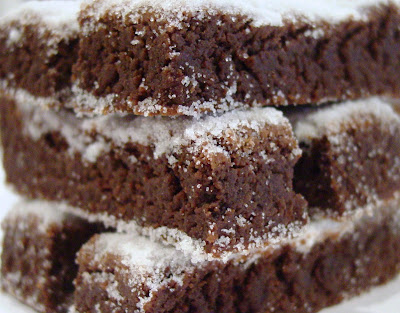 NOTE: I baked my shortbread in a 8x11-inch pyrex dish (the recipe calls for a 8x12) and it took far longer than 20 minutes. In fact, it was closer to 50 minutes! I was worried they'd burn, but they were still jiggly in the center. When they firm up and dry out a bit (no longer shiny), they're done, but it may take longer than the time the recipe states. I let them cool overnight and even the next day, they were still a bit soft in the middle. They were cooked throughout, but I think they could have dried out a little more.

So if you want to make these (and you should), make sure your calendar is clear, because you'll be running back and forth to the oven, just a few times. Just think of it this way, you'll burn up the calories you'll be consuming when you eat these buttery shortbread :-) 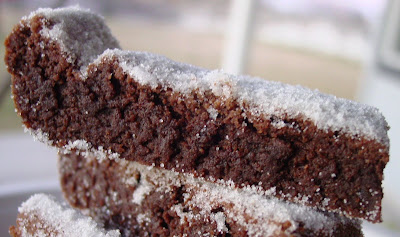 Monica- Well, they look damn good. Some of her (Martha's) recipes have been hit or miss for me. (Sometimes I think it's the people who edit).. These look awesome though and anything with 3 sticks of butter, cocoa, and cinnamon is essential to my being. But my dilemna is this: How do I decide what to try first from your blog when it all looks so freaking good!

I loved making these. And they were so much fun to eat and photograph.
Nicely done!!

Donna, you just start from the very beginning and eat your way though, all the while gaining a gut you'll never get rid of. BUT, it will be all worth it!

Dawn, Did you have any trouble with yours? How long did you have to bake them?