Can I Have Some More Please? 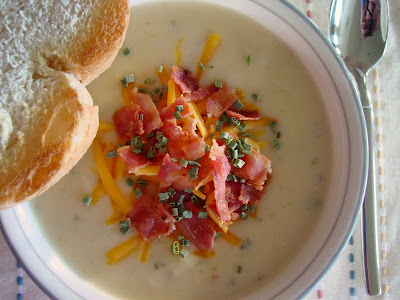 I like soup. I like many kinds of soup. My husband does not. It has to snowing before he'll eat soup, which here in Texas doesn't happen very often. He does like chili, but that's a manly dish, potato soup is not. So I had to dress it up to his liking by adding (more) cheese, bacon and chives for a hearty baked potato feel. It was a hit. In fact my husband said (his exact words), "This soup is so good. I'm gonna get some more, want some?"

Place cubed potatoes, onions, celery and salt in a large pot. Cover potatoes with broth or water (you may need a little more than 4 cups) and simmer until tender, about 30 minutes up to an hour depending on how tender you like your veggies. Place shredded potatoes in a separate pot (just covered with water) and boil til tender.

Once cooked to your liking, put in blender or food processor fitted with the metal blade and puree until smooth.

Return to pot then add half-n-half, butter, shredded potatoes, parsley and cheese. Stir and simmer until piping hot, but do not boil. Top with bacon pieces, cheese and chives- yum!

NOTE: If you have an immersion blender, I suggest using it. It's one less thing to clean up and easier than transferring hot veggies from pot to pot.

Also, I used dried parsley because I didn't have fresh and reduced the amount to 2 tbsp.

*The original recipe called for water to boil the potatoes in, but I used chicken broth for more flavor. Use what you have or like. 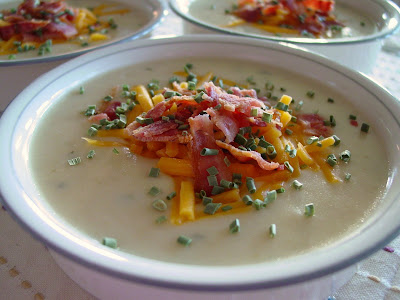 Mmm, everything is better with bacon and cheese. Works for me.

Mmm, everything is better with bacon and cheese. Works for me.

I got to get me one of those immersion blenders. They have to be cheaper than a food processor right?

I always see soup but am stopped by the whole, put in your blender step.

This looks so yummy!

Love the amount of toppings on top of the soup--glad you think "hearty".
This is bookmarked for sure.

Hennifer- you don't have to blend this at all. In fact you don't even have to add the shredded potatoes if you don't blend it (that's just for texture). Just be sure to finely chop the onions and celery, then mash the potatoes til the desired consistancy. You'll just have chunky potato soup- which sounds fine to me!