My First Catered Party and A Spooktacular Halloween Cake 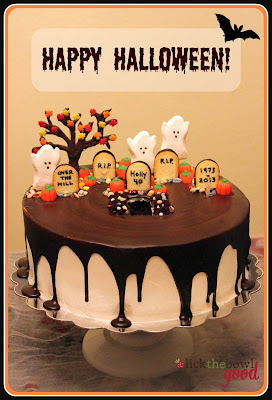 Last week I catered my first party for 40 people. My friend Holly asked if I would make a cake and heavy hors d'oeuvres for her 40th birthday extravaganza. I immediately said "yes!" then began brainstorming recipes and  ideas. Holly said she wanted a Halloween themed chocolate cake and sliders. I pretty much had carte blanche with the menu and decorating and I had so much fun. Here's what I made. 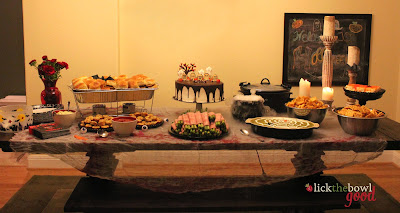 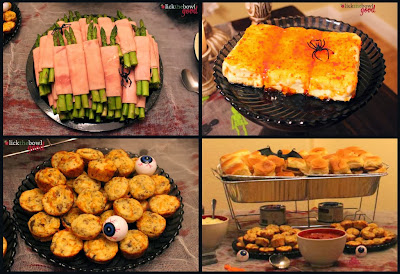 I also made 7 Layer Dip with a Sour Cream Spiderweb served with corn chips and Sweet and Spicy Smoky Meatballs (that I forgot to take a picture of). And birthday cake! 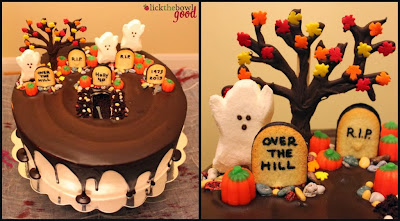 My friend Holly doesn't actually turn 40 until December but she wanted to celebrate early with a "Happy Hollyween" party. I wanted to play up the "over the hill" theme so I did a graveyard scene and dug an early grave for her. I used Pepperidge Farm Milano cookies and a black edible marker for the tombstones. I used Peeps Marshmallow ghosts, Brach's pumpkins and edible chocolate rocks for decorating. I used melted dark chocolate and Wilton leaf sprinkles to make the tree. I used this Chocolate Cake Recipe, this Vanilla Buttercream Recipe and Chocolate Ganache to make the 2 layer 12-inch cake. It was a success! 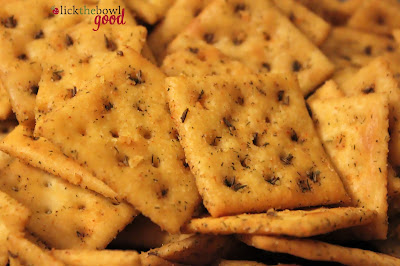 Spicy Saltine Crackers
(recipe given to me by my aunt Melinda)

In a measuring cup, combine the oil and seasonings. Mix well.

Place the crackers into a 2 gallon Ziploc bag. Pour the seasoned oil over the crackers and shake vigorously until well coated. Let crackers soak up the seasonings for at least one hour or overnight. Leave them in the sealed bag until ready to serve.

Everything looks great - I love to cater parties- I just don't like attending them. I want to feed people, make people happy and then I want them OUT of my house ASAP.

Great cake! The food looks wonderful. Congrats on the gig!

Your true artistry came out with this post. Beautiful job! Red pepper jelly with cream cheese is one of my favorite snacks of ALL time. I'm looking for my own recipe, so I can make my own jam. LOVE this! So, you're now a published cookbook author... and your bakery will open when?

Everything looks delicious!! I love the leaf sprinkles on the tree, how clever!! That cake is gorgeous!!

Everything looks and sounds delicious!

Congratulations on your first Catered Party! =)

Wow Monica it all looks amazing. That cake is stunning, you've got the icing so smooth. Looks like a fabulous party, I but she was over the moon with it.

Andrew's Mom- I hear ya! I wasn't invited to the party, and that's okay, I'm just glad everyone ate well :-)

Debby- Aww, you're so sweet. Thank you so much!

Coleen- I've had those sprinkles for a long time and I finally used them all uP!

Melissa- Thank you, it was fun!

Everything looks so delicious Monica. I especially love that cake! You are one talented lady!!!!

The cake is amazing.

Everything looks great, kudos to you!

Wow, that spread looks amazing! Nice job on the cake, I might have to try something like this for Halloween this week!!

Love that cake and I am very intrigued by the saltines, may have to try them.

Spectacular is the word I would have chosen for this party foods and decor food.

Your friend will have been thrilled to her fingertips.

You nailed it Monica!!
~Ingrid

Thanks everyone. I appreciate it! Happy Halloween!