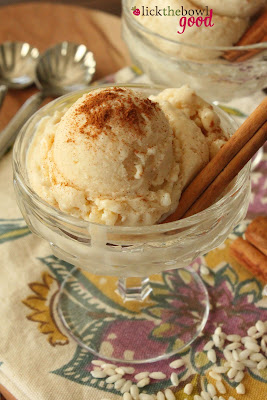 I don't remember my Grandma baking very much when we were kids. She was an excellent cook and made the best pot of beans, skillet fried chicken and potato salad, just to name a few. I always loved her potato salad just after she made it when the potatoes were still warm and soft. She always saved a bowl for me to enjoy at room temperature while the rest of it went into the refrigerator. In July, we took a road trip and visited my cousin for his 1st birthday and stayed at my grandparents house. On our last night there we had a cookout and I was able to enjoy her potato salad again. It's little things like that that take me back to my childhood. My mom still makes potato salad, and while it's similar (and delicious), it's not my grandma's.

When my grandma did make "dessert" it was often a bowl of atole de arroz, which is kind of like rice pudding but not as rich or creamy. It's more of a rice porridge, made with white rice, sugar, water, milk and cinnamon sticks. During the summer months, a man would walk all over town pushing a cart of Mexican popsicles, called paletas. We called him "The Paleta Man" :-). And just like the ice cream truck, we'd hear him ringing his bell, run outside and flag him down as he approached our house. We would make our requests and he'd reach into his mint green chilled chest and pull out colorful treats on sticks. I liked the fresh strawberry and the rice paleta the best. The rice paleta was milky, creamy, lightly sweetened and had a dusting of cinnamon on it. What made it different from the rest was that it had nibbly bits of rice in it. I loved that. 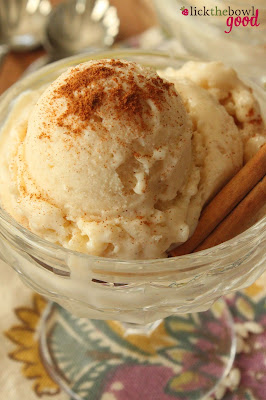 When I came across this recipe for Rice Gelato from The Perfect Scoop, I knew it would be making an appearance in my future. The original recipe called for adding strips of orange zest to the rice mixture, but cinnamon sticks seemed more up my alley. It's what reminds me of home, so that's what I used. I also added a bit of ground cinnamon to the mixture after the rice was cooked. The smell of the sweet rice cooking filled the house like perfume. This gelato is much creamier and richer than anything my grandma ever made, but this is gelato after all, and it should be creamy. The rice softens and plumps up during the cooking process- half of it is blended really finely and the other half stays whole for optimal texture.While this dessert is frozen and is great on an end of summer day, there's something about it that comforts and soothes the soul. And that to me, is the best of both worlds. 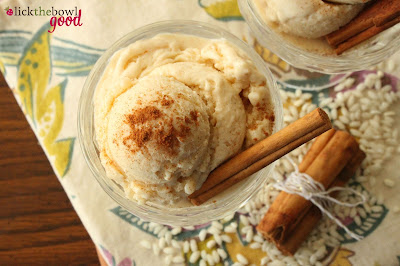 In a 2 quart baking dish, mix together the rice, milk 1/4 cup of the sugar and the salt. Add the vanilla bean and cinnamon stick and cover the dish with aluminum foil.

Bake for 1 hour. Remove the rice from the oven and remove the foil. Stir in the remaining 1/2 cup sugar, then continue to bake the rice, uncovered for an additional 30 minutes.

Remove the rice from the oven a second time, remove the vanilla bean and cinnamon stick and briskly whisk in the egg yolks at once. Then whisk in the half and half or cream, round cinnamon and nutmeg.

Puree half of the rice mixture in a blender or food processor until finely chopped. Then stir it back into the cooked rice.

Place the rice mixture in the fridge until completely chilled. Then freeze it in your ice cream maker according to the manufacturer’s directions.

NOTE: This gelato freezes really hard. Let it sit out at room temperature for about 10 minutes before serving, if necessary.

i love this idea monica, rice pudding is comfort food,

I loved my Granny's warm rice pudding and even though we have her recipe, it just never tastes quite like hers did. Food makes wonderful memories!

Grandma's recipes are always the best. My grandma didn't make potato salad but she did makes zeppole. They were so good! This dish look delicious Monica. Have a great weekend!

I love this recipe. Monica, he is growing so fast. I still want those curls. lol Trish Butler

this reciepe is so good. i like it bro

My husband is Mexican and he loves rice paleta. In Costa Rica we make arroz con leche and every time I make it here I freeze it for him, so he can have a little taste of home. I am sure mine is not as good as yours :)

This is very similar to my version of rice pudding, but talk about taking it to the next level. Yum!

This blog is very good for the growth of my new site, I am very grateful for many yea arrival of the owner of this blog because I am allowing the link here, to hope his boss is always healthy, amen

Grandma's recipes are always the best. My grandma didn't make potato salad but she did makes zeppole. They were so good! This dish look delicious Monica. Have a great weekend!