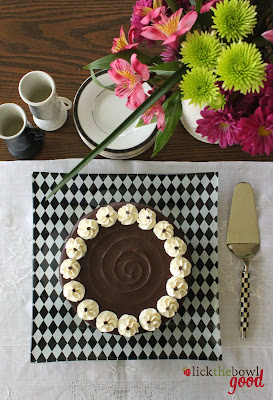 Helllooooo! I had no intention of taking a break from my blog for so long. After all the tireless nights of baking and writing recipes and taking so many pictures of sweets, I needed time away. I had no idea I'd be gone for a month though but I'm glad to be back. I got a gentle, but much needed, push from my fellow Cake Slice Bakers (follow The Cake Slice Bakers on Facebook). I've been neglecting that group too and I finally got back in the kitchen and made this fabulous cake for Father's Day. 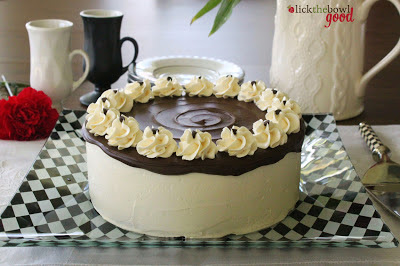 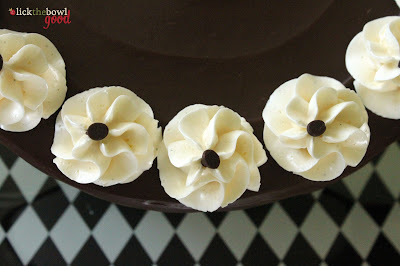 It's a dark cocoa cake, filled with chocolate ganache and enrobed in silky not-too-sweet Swiss meringue buttercream. I opted for more ganache on top, because that's just how I roll. This cake tasted like a giant Oreo cookie and went perfectly with a glass of milk. If you're looking for a striking cake for a special occasion give this one a try. I have made a few treats in the past few weeks and I promise to share those with you soon. Happy Summer y'all! 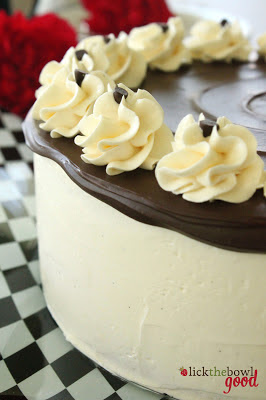 Thank you to Becca of Cookie Jar Treats for sharing the recipe on her blog :-). Preheat the oven to 350 F. Line two 8-inch round baking pans with parchment paper. Grease each pan with cooking spray.

In a small bowl, combine the cocoa powder and hot coffee and stir until thick. Stir in the sour cream and vanilla. The mixture will still be thick but it will be a little looser. In a medium bowl, sift together the flour, baking soda, and salt. Whisk to combine.

In the bowl of an electric mixer fitted with the paddle attachment, beat the butter on medium-high speed until smooth. Slowly add in both sugars. Beat until light and fluffy. Scrape the sides of the bowl as needed. Add the eggs and egg yolks one at a time until. Beat until fully incorporated. Turn the mixer speed down to low and add the flour mixture in three parts, alternating with the chocolate mixture in two parts. Begin and end with the flour. Scrape the sides of the bowl to ensure all the ingredients are blended together.

Pour half of the batter into one prepared pan and the remaining batter in the other pan. Tap each pan on the counter a few times to allow air bubbles to escape. Place each pan on the center rack, evenly spaced, and bake for 35-40 minutes or until a toothpick comes out clean when inserted in the middle and the tops are cracked.

Cool the cakes in the pan for 30 minutes before inverting them and placing them top side up on a cooling rack to cool completely before assembling.

To assemble the cake, lay one of the cakes, top side up, on a serving plate.  Frost the top with about ½ cup of ganache, spreading it just before the edge of the cake. Refrigerate for about 5 minutes to allow the ganache to firm up. Once the ganache has firmed, spread about 1 cup of the buttercream, covering the ganache, and taking it all the way to the edge of the cake. Align the second cake on top of the buttercream, top side up. Frost the top with another ½ cup cup of ganache. Chill in the fridge for another 5 minutes. Once chilled, spread a thin coat of buttercream all around the cake, creating a crumb coat.  Place in the fridge for about 10 minutes to firm up the thin layer of frosting. Frost the cake with the remaining buttercream. Decorate the cake with dots or kissed with any of the remaining ganache in desired.


Using a hand whisk, whisk together the egg whites, sugar, and cream of tartar in the bowl of a stand mixer. Place the bowl over a saucepan of simmering water. The more the mixture is heated, the more fluid-like it will become. Continue to gently whisk the mixture until very hot to the touch (130 F on a candy thermometer).

Move the bowl to the stand mixer and, using the whisk attachment, whip the whites and sugar mixture together on medium-high speed until it has tripped in volume and its appearance is thick, glossy, and holds stiff peaks. Turn the mixer down to medium-low speed until the bowl is cool to touch. Turn the speed back up and add the butter, one cube at a time. At first the mixture will still look like meringue, then the frosting will look as if it has curdled. Continue to add butter and mix no matter what. Continue to whip the buttercream until it is fluffy and creamy. Blend in the vanilla and salt until combined. 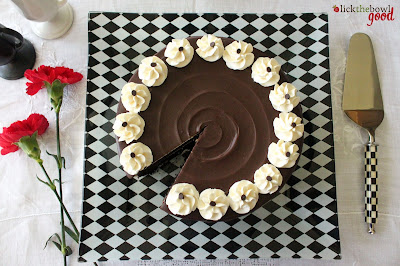 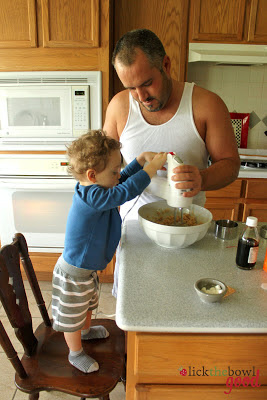 My little baker man and his Daddy!
Recipe Made by Monica H at 3:11 AM

What a stunning cake. Looks like it was worth the wait.

Gah! Your cake is so gorgeous is ridiculous. I can't wait to see the outcome of your cook book :)

It's beautiful, and your little man is so cute too!

Happy Father's day to your Hubby.

Great job with the cake Monica, It looks lovely.

Happy summer to you as well and your cake is gorgeous!!

Welcome back Monica! Beautiful cake...it looks too pretty to eat! Your little guy is getting so big..wow!

Your cake looks delicious! =)
( chocolate is my favorite! )

Welcome back! I look forward to all of your creations!

This looks beautiful and delicious ! and look at your little man ! How precious ! I've got a birthday coming up and may attempt to make this. Thanks so much.

Stunning, as usual! I like how your ganache stopped when you said so!

Monica,
You have OUT DONE yourself! Completely out done yourself.
Gorgeous, gorgeous cake Honey Pie!
Hugs,
~avril :-)

Love how you used the ganache on top. Looks decadent!

Your cakes always look so fabulous and this one doesn't disappoint one bit.
Love the pic of your men folk baking ~ so fun!

Gah! The dessert can be so lovely is actually absurd. I am unable to hold out to view the results of one's cook book :)Diablo 3 Gold
Gold für Diablo 3 KaufenGold For RS

I just love how you decorated this cake - it truly is a work of art. I am so looking forward to your cookbook. You deserve every bit of success that I know is coming your way.

Is 1.5 cups of flour correct? I just made this according to the directions and it just doesn't seem like enough to fill two cake pans.