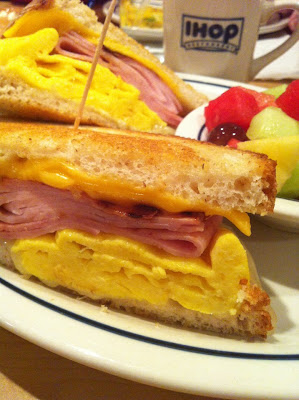 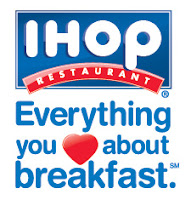 I recently received an email asking if I'd like to try out the new Griddle Melts from IHOP. You better believe I did! I am a big fan of breakfast and breakfast sandwiches and these Griddle Melts not only looked delicious, they quite tasty as well.

There are three Griddle Melt varieties to choose from. All are served with french fries, hash browns or fresh fruit. 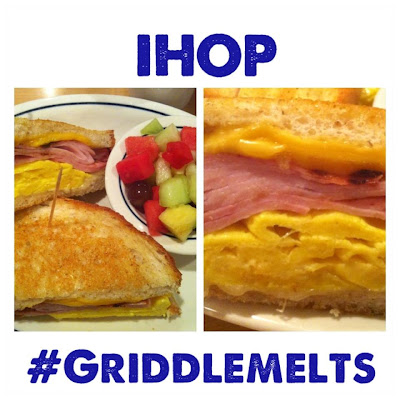 I chose the ham and egg melt and it was stuffed with multiple layers of ham, egg omelet and two kinds of cheese- Swiss and American. The thick sourdough was buttery and toasty and tasted fresh. I'm not a huge fan of American cheese and would have preferred Cheddar, but it was good. Everyone at the table got a taste and we all seemed to like it, but my mother-in-law thought it was a little salty. If you're sensitive to salt, keep that in mind.

If you like omelets and breakfast sandwiches, these are for you. Between the three varieties, there is something for everyone for breakfast, lunch or dinner. Which one would  you chose? 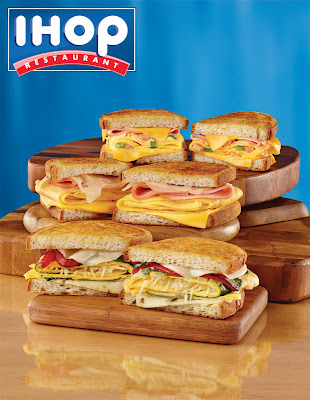 Would you like to try an IHOP Griddle Melt for yourself?

Simply leave me a comment on this post telling me which of the three varieties of Griddle Melts you would like to try and you could win a $25 IHOP giftcard. One comment per person please.

I'll chose a winner at random and announce it here on Lick The Bowl Good on Thursday, February 28th.

This post is sponsored by IHOP. I was provided with gift cards to try the new Griddle Melts but I was not paid to write this post nor did they influence my opinion.


I would like to try the spinach, roasted pepper & cheese, that combo sounds super yummy!

These look awesome! I would try the Western Melt...but probably with some pancakes on the side! ;)

I am a tradionalist, so the ham, egg and cheese sounds yummy!

I'd probably go with spinach, pepper and cheese...sounds so good! And we missed the Children's hospital fundraiser because of our move so we'd LOVE to have a gift card to IHOP. It is a once a year treat for our family!

I love IHOP. I would choose the Ham and Cheese melt.

The Ham & Egg Melt! They look good! I miss IHOP!

The Ham and Egg sound delic!

I'd love to try the Spinach, Roasted Pepper & Cheese Melt
Thank you for hosting this giveaway

I would like the Spinach, Roasted Pepper & Cheese melt
kellywcu8888ATgmailDOTcom

Spinach, roasted pepper & cheese, please!! I had breakfast there today and was gonna try one but thought naw ill try later. :-)

I would like to try the spinach, red pepper melt. Sounds YUMMY

I'd try the Ham & Egg Melt & ask if they could switch the Cheddar Cheese for the American. (I'm not a fan either!)

Thanks for the chance to win. I just discovered your blog tonight when I pinned your Rum Cake recipe.

Ham and egg, cause I love Swiss cheese. Thanks for the opportunity!
susan23cherub@yahoo.com

The nearest IHOP from my home is 90 miles. What a great excuse to go there if I win....my taste would be for the Western - YUM!

Ham & Egg melt!! Nothing is better than swiss cheese :)

Oh, the Spinach, Roasted Peppers & Cheese sounds divine! I would love to have one of those :)

I would try the spinach one.

Yum... my daughter's favorite place to eat is IHOP... she's having a baby in a few wks. it would be fun to gift her... she's probably like the ham & cheese :9 *someone's getting blessed for sure...

All of the choices sound good, but I think my favorite would be the Western Griddle Melt.

We live about 15 minutes away from a IHOP, and I always enjoy going there!
Thanks for the chance to win! =)

I would try the Western griddle. But they all look and sound good.

I think that I would go for the Western griddle. That sounds the best to me. Thanks!

I would love to try to make the 'Ham and Egg Melt'. My husband and I would be thrilled!

That spinach, roasted red pepper one is calling to me! Provolone, Parm and Pepper Jack are my FAVORITE cheese! Thank you!

I would like to try the Ham and Egg Melt!
keshakeke(at)gmail(dot)com

I'd like the spinach, roasted red pepper sandwich. I love spinach.

It would have to be the spinach one. I love spinach with eggs.

Bring on the ham and egg

I'd try the western!

The spinach, roasted peppers & cheese would be my pick. Just discovering Pinterest & subscribed to your blog. Loving it. Thanks!

I would love the Western sandwich! Does it come with a cowboy also?

The SPINACH one for me and the Western for my HubbHubb. I think I may actually create my version of these for dinner tonight...
Need more pics of Hayden. Love the ones where he's tasting Mama's fixins.

They all sound great but I would probably go with the egg & cheese. Decisions, Decisions......Yum!

I goofed and did the anonymous 47, so sorry. I would love the Western one and am praying it comes woith a cowboy!

The Western melt sounds great and something I would order since I would not make it at home!

decisions, decisions...they all sound yummy but the spinach and roasted peppers sounds right up my alley. went to an IHOP about 6 months ago for the first time in a long time and was pretty pleased with their new lighter menu choices and these new sandwiches sound like a good addition too. Thanks for the chance to win!

The Western for sure, sounds delish!

I would try the Western one, but they all sound delicious! I love breakfast, especially savory dishes!

Ham and cheese melt. I've never been to an IHOP and on our strict budget this would be a great way to try it.

I think all sound great-- 1 would try the cham and cheese first, as your picture makes it look delicious

mmm I definitely want to try the Western

Ham and Egg Melt for sure! Sounds delish!

I'd love to try to Spinach, Roasted Pepper, and Cheese! Yumm.

The spinach, roasted Pepper and cheese. Thanks

The Western sounds yummy to me. Thanks for chance to win.

the ham and cheese melt for me
thanks
aunteegem@yahoo.com

I'm with you! Ham and Egg Melt looks divine!

I think I'd like to try the Spinach one. Although they all sound delish!!

The Western sounds yummy. Thanks!

They all look yummy, but I think the Spinach one would be good! :)

I would try the spinach, roasted pepper and cheese

These look very good. I would go with the ham and cheese. Yum!

I'd like to try the ham and egg melt.

I would love to try the Spinach, Roasted Pepper & Cheese griddlement!
bjn1957{at}gmail{dot}com

I'd love to try the spinach one. I'd have to have it at lunchtime though....I'm more of a sweet rather than savory in the AM!!! :)

Thank you for superb ingredient. Freezing lasted therefore attained fabulous: -)
Excellent blog page utilizing treat excellent recipes ourselves if you're involved. I have a blog with cake recipes myself if you are interested. You can find it at http://recipes-for-food.com/

I would try the spinach, roasted red pepper, and cheese! yum!!

I would love to try the spinach, roasted red pepper and cheese, yummmo--they have great hot cocoa toooo! from momanddad00@clear.net and my name is mjs!!!!!!!! Love your blog read it often, your baby is so so so cute..getting bigger and cuter!

I would love to try the Spinach, Roasted Pepper & Cheese Griddle Melt!

I would like to try the Ham and Egg melt. Sounds tasty!
tweety800265(at)yahoo(dot)com

Ham and egg for sure!

The Spinach and Red Pepper and cheese looks GOOD.

The spinach and pepper with cheese looks great!
Ttrockwood@yahoo.com

The spinach one sounds awesome!

I saw those the last time I was at IHOP! I'd definitely get the ham and cheese. YUM.

I would try to spinach, roasted pepper, and cheese. Sounds deliteful!

I'd love the ham and egg! They look delish!

I would love to try the Western Griddlemelt

The Western sounds good to me.

I went to IHOP recently and noticed these melts. (I still picked pancakes.) They did look good. I would try ham and egg melt but they all really sounded good.

Following you now, found you from a Pin of your no bake chocolate peanut butter cookies. Have to try the rolo crackers now too.

Lisa in Fort Worth

has the winner been announced yet?
thanks
aunteegem@yahoho.com