A Classic Recipe With A Twist 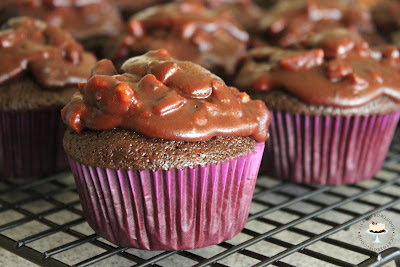 The members of the "Lick The Bowl" household are Texas Sheet Cake lovers. Being fans of chocolate cake, cinnamon kissed fudgy icing loaded with homegrown toasted pecans....What's not to love? Well if you're not nut or chocolate fans, then move on, but if you're a sucker for the good stuff like I am, then stick around and pour yourself a glass of icy milk, because I turned the Southern potluck favorite into cupcakes! 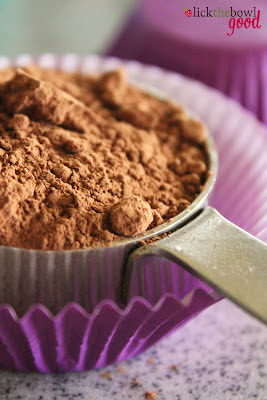 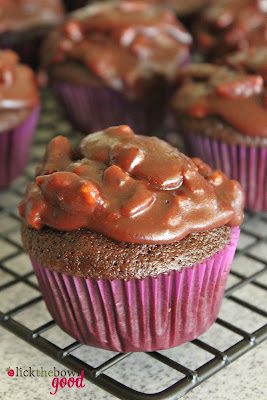 Traditionally, a Texas Sheet Cake is baked and served in the same pan. While the cake is still warm from the oven, you pour the molten icing over it and allow it to cool. This gives the icing and the cake ample opportunity to bond and become one with one another as the icing oozes into all the nooks and crannies. It's a good thing, trust me. My version starts off with a simple one-bowl chocolate cupcake then after it's cooled,  gets iced with a rich and sweet cocoa icing loaded with toasted pecans. Allowing the cupcakes and icing to cool a bit before topping them them helps keep the icing intact, rather than sliding off the cupcake and onto the counter.

These cupcakes were rich and decadent, just like the typical sheet cake. All the elements of the classic cake are still there, just in a new and prettier (updated) package, which makes them perfect for gift giving or celebrations. I don't know about you, but I like classic recipes with a twist- it keeps things fresh and exciting. If you're a Texas Sheet Cake fan, I sincerely hope you'll consider whipping up a batch or two and sharing with your loved ones. 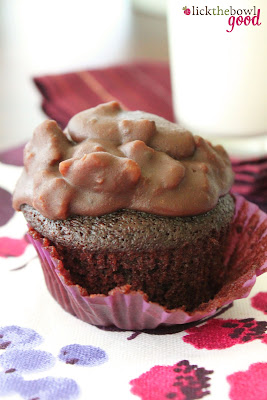 
Add the oil, water, vanilla and eggs to the dry ingredients. Whisk until well incorporated and no lumps remain.

Evenly divide the batter between the lined cupcakes tins.


Bake the cupcakes for 18 to 20 minutes, or until a toothpick inserted into the center comes out clean. Allow to cool for 10 minutes; then place them on a rack to cool completely before topping with pecan fudge icing.

Toasted Pecan Fudge Icing:
While the oven is still on, place your pecans on a rimmed baking sheet and place in the oven for 10 minutes until the pecans become aromatic and have turned a slight golden brown, being careful not to burn them.

Remove from the oven and allow them to cool on the baking sheet. Once cool, chop the pecans and set them aside.

In a medium sauce pot, combine butter, milk, cocoa and cinnamon (if using). Stir over low heat until butter is melted. Add powdered sugar 1 cup at a time while continuing to stir until smooth. Stir in vanilla extract and chopped pecans.

Take the pan off the heat but leave the icing in the pot. Allow the icing to cool for 15-30 minutes until the pot is cool enough to touch. The icing will thicken as it cools. You want the icing to be thick enough to stay on top of the cupcake but not too thick that it doesn't spread. If your icing becomes hard and too thick to handle, place it back on the stove over low heat and stir until the desired consistency is met.

Using a small ice cream scoop, place a small mound on top of each cupcake. The icing will spread slightly and possibly drip down the sides a bit, depending how warm your icing is. Divide evenly over each cupcake. Allow the icing to cool completely and set before enjoying. 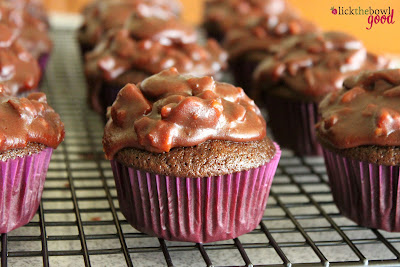 Ww, I do love the look of that frosting :) It looks so fudegy and creamy!

These look great! My automatic reaction was to make these for Little Butt's Teacher Appreciation Day but we aren't allowed to have anything with nuts. Boo. :-(

This looks wonderful, and is on my list to make. Question...how hard would it be to make this site one can 'pin' ? I'd like to pin this for safekeeping. and share :>)

Great twist on a famous and classic cake! Way to go Monica! They look sooo good!

Monica, this is a great idea! Those pecans....all that warm chocolate frosting....heaven in a cupcake! I love the new take on a Texas classic!

These look like they could be a great treat at a Halloween party!

Speaking of Holiday baking, this newsletter I subscribe to is holding a recipe contest for the holidays! I was able to find a link for it on their Facebook page:

If you have a good recipe, don't be afraid to dive right in!

That icing sounds so amazing! I've only had Texas sheet cake once and I've never made it - I think that needs to change!

Love your cupcake version of the Texas Sheet cake! Hayden looks yummy too!

Does the frosting stay soft-like or is it kind of "crispy"? Either way, yum. Just kind of thinking about making just the frosting... ha ha ha. Oh, and your young man's such a doll!

I made them on friday!!! OMG, they are to die for

I grew up on Texas Sheet Cake! I love that you did a cupcake version! I could use a little portion control when it comes to Texas Sheet Cake and the cupcakes might just do the trick ;)

Living in Philadelphia I have never heard of Texas Sheet Cake and it sounded delicious. I had to try it.

I made it in a jelly roll pan lined with parchment paper. Using this method I had cake in less time. I change the frosting a bit by using coconut oil instead of butter. Coconut oil hardened the frosting. Once the frosting was mixed I spread it immediately on the sheet cake. Once frosted I cut 3" / 7.5cm squares and layered two squares together.

I thought it turned out well. I may use two coconut oil and one butter for the butter taste next time.

Uhhhh if allergic to nuts....just don't add them.