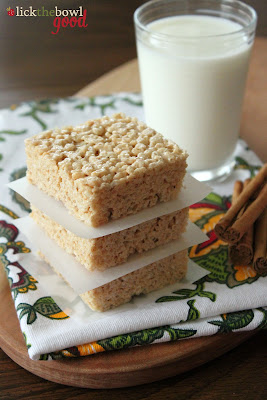 I  used to think my mom made the best rice krispie treats. That is, until I made these. Now don't get me wrong, I still love my mom's version because she doesn't measure anything and keeps on adding more butter or marshmallows as she sees fit, which makes them extra buttery and gooey to the point where the marshmallows stretch apart well after they've cooled. They're so good. But these are different. I've made them 4 times already and have yet to blog them because they disappear so quickly and there's never any left. Today is your lucky day!

These rice krispie treats are made with browned butter. Browned butter is exactly what is sounds like. It is butter that has been browned. You start off by melting the butter in a pot, as it boils, sputters and foams slightly, the milk solids cook, resulting in brown bits at the bottom of the pan and the butter turns a lovely hue of gold and it smells rich and nutty. You can use in in place of regular butter and can be used in both sweet and savory recipes. It just kicks up the regular rice treats to a whole new level-  makes them more than just an after school treat.
The addition of the spices makes these special too. The spice is subtle and not overwhelming and compliments the browned butter so nicely. I don't know about you, but spices like cinnamon, nutmeg and ginger are welcome in my kitchen all year round, not just in the Fall. If you're looking for something just a little bit different, give these a try. I promise you will not be disappointed. In fact, now my mom requests I make these for her :-) 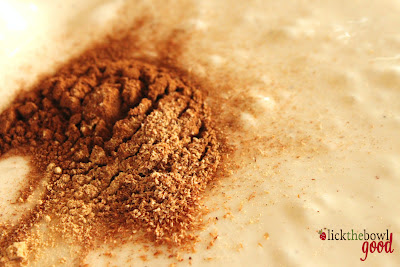 Printer Friendly Version
Coat a 9x13 inch pan with butter or non-stick cooking spray. Measure out the cereal and set aside. Pour the marshmallows into a large bowl and set aside.

To make the browned butter: Melt the butter in a small pot over medium heat. Continue to cook, swirling the pan occasionally until the butter boils and turns golden brown and smells slightly nutty. Keep an eye on it because you don't want  it to burn. This could take 5-10 minutes.

Once the butter is brown and nutty, immediately pour it into the large bowl over the marshmallows- some brown bits may go with it, and that's okay. Stir to combine then place the entire bowl in the microwave for 30 seconds. Stir and reheat for an additional 30 seconds until the marshmallows have completely melted. Be careful because the mixture will be hot. Repeat if necessary. 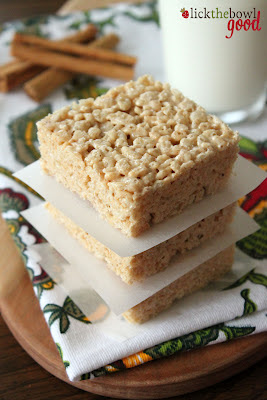 I've been making these with browned butter since I don't remember when and LOVE them! I'll have to try it with the spices sometime!! :)

The look on Hayden's face is priceless.

Hayden is adorable - so cute that you got a photo of him getting that bowl :).

As for the brown butter - BRILLIANT! I love that you added warm spices too. Very nice... will have to remember this the next time I make them. Take care.

Gooey and irresistible and delicious!!!
And the rice krispie treats too ;)
Big hugs,
Nora

I love the picture of your sweet baby! I just tried brown butter for the first time last month! It's an awesome addition!

Rice Krispies treats are one of my favorite snacks ever! I'm going to try them this way. Hayden is looking extra cute! He's really growing up!

my oh my, that sounds amazing!

I accidently made 'brown butter' one time when I was making Rice Krispy Treats and didn't even think to use it for my treats. : ( I threw it out and started over! Now I regret that I didn't give it a try especially with these spices.

Oh man these look so great! I've only browned butter a few times before (I'm not even sure if I do it right. :P) but I'm probably going to do it again for these rice krispie treats (they are one of my favorite snack foods :) )

A) It's harder to brown butter in a non-stick pan than one with a shiny bottom.

B) Bacon. How would that not be better?

That photo of Hayden is absolutely adorable!!!!!!! And the browned butter sounds like it would take Rice Krispie Treats to a whole new level - yum!

I am so glad Hayden is feeling better. He looks so freaking cute in that photo!!! You took a great shot of him in motion.

I'm not a fan of Krispy Kreats, but I am a fan of you and Haydencito. I miss and love you!!

P.S. I'm doing well in Italy. I'm in Reggio Calabria now (toe of the boot) and love my apartment.

I am embarrassed to say I have never even ONCE thought of upscaling our rice krispy treats (one of picky-picky husbands favorites). You are brilliant!! That look on Hayden's face is priceless!!

Look at that cute Sneaky McSneakerson! And would you believe that I've never actually made rice krispy treats?!

Oh my gosh that little stinker! I love him!! And I love brown butter!!! I want summa these treats NOW!!!

The treats sound so yummy, will try them soon..Hayden looks so darned cute, could there be another as cute as Hayden I think not, thanks for sharing photos of your precious angel and the recipes too,yummmeee!!!!!!!!!

Can you heat the marshmallows on the stove? I don't have a microwave!

Liz, absolutely, yes you can!

Interesting. I don't usually like variations on Rice Krispie Treats, but that's because they often have things like cocoa that make them dry. Thanks for sharing.

Wow! how yummy! I just made them and they were so good! Had to melt the mallows in the microwave a little to get them to fully melt, but what a great variation of the traditional treat. Perfect for fall.

Eating a square with my coffee as I type! Soooo good. I've never made brown butter before--I want to look for more recipes that call for it. Thank you for sharing.

Thanks for the recipe! This is just was I was looking for: a quick dessert for Thanksgiving! It's so simple and charming for the dinner guests who are so overstuffed with the main course and are looking for something small to finish their dinner with. Happy holidays to you and your family!!!