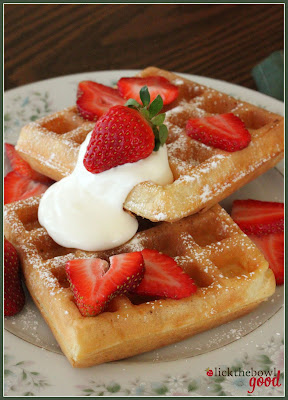 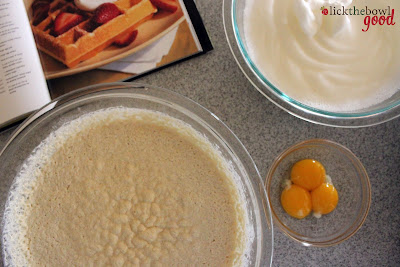 We've made these waffles several times since discovering them in Williams-Sonoma's Breakfast book. This is also the same cookbook that I found the delicious Sour Cream Coffee Cake. The first time we made them we only made one batch, which didn't last very long. Now when we make them, we double or triple the recipe and freeze the leftovers- they reheat wonderfully in the toaster. You noticed I said "we" right? That's right, Mr. H likes these so much even he helps make them. I heat the wet ingredients and he measures and stirs out the dry. We're a good team when it comes to making waffles. 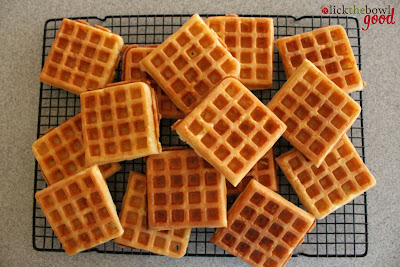 This is a triple batch of waffles.

One of the things that I like about these waffles, other than the taste, is that most of the prep work is done the night before you make them. Overnight, the yeast mingles with all the other ingredients and does it's thing, making the batter light and airy. In the morning all you have to do is whip up the egg whites and fold it into the batter and breakfast is done in no time. These really are the best waffles I've ever made or eaten. If you try them, I hope you love them as much as we do! 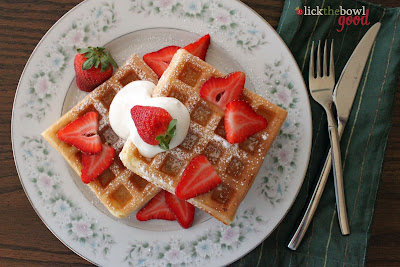 Belgian Waffles from Williams-Sonoma's Breakfast
Printer Friendly Version
The night before you plan to serve the waffles: In a large bowl. whisk together the flour, granulated sugar, salt and yeast. In a small saucepan over medium-high heat. combine the whole milk and the sparkling water and heat to lukewarm (105 degreesF). Whisk in the melted butter and vanilla. Pour into the dry ingredients and whisk until smooth. Cover tightly and let stand overnight at cool room temperature.

The next morning: Preheat a Belgian waffle iron. Whisk the egg yolk into the batter. In a large clean bowl, using an electric mixer on high speed, beat the egg whites and the cream of tartar until soft peaks form. Thoroughly stir about one-third of the beaten whites into the batter, then fold in the remaining whites, without overmixing.

When the waffle iron is hot, ladle 3/4-1 cup of batter into each waffle section and spread with a wooden spoon so the grids are evenly covered. Close the iron and cook according to the manufacturer's instructions until the waffle exterior is golden brown and the inside is light and springy, 4-5 minutes. (The first waffle may not be perfect. Adjust the amount of batter and cooking time if necessary.) 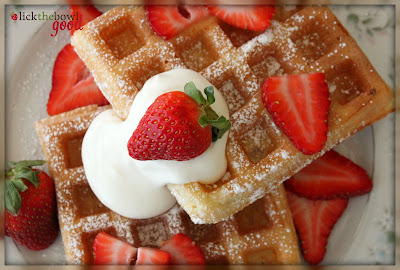 Happy, happy waffles!
Recipe Made by Monica H at 9:53 PM

I thought the same thing about American/Belgian waffles--that it just had to do with the size of the holes. I had no idea that Belgian waffles had yeast. Thanks for sharing! Yours look perfect!

I knew that Belgian Waffles were flfuffier, bigger, and usually square, as oppsed to the American waffle, but I didn't know about the yeast. I love the smell of yeast - yeast makes everything better!

Sound wonderful. Thanks for sharing. Someday, when I remember, I will share my sour cream pancake recipe with you. They are so good and people who do not care for sour cream cannot tell it is in there. Just makes them fluffy.

I love Belgian waffles! I've been making Waffles of Insane Greatness because they are easier, but I'm bookmarking this recipe for future reference.

These look so good. Cant wait to try them :)

These are beautiful, Monica. I made Liege Belgian waffles, but you have buy the pearl sugar. If you try that version, you'll fall in-love with them, too. I can hardly wait for my organic strawberries to come into season. I'll be making waffles, then.

These look really good, you did well!
I love Belgian waffles with syrup, so yummy:)

Good Morning...thinking about you this morning as I hear about all the tornadoes in TX last night...hope all is well with you and your family....Nina

Sparkling water?? Interesting. Maybe I'll make these for myself for Mother's Day. LOL!

No one else is worried about leaving milk out overnight? I would be interested in knowing more about whatever chemistry is happening and why it is ok.

What make of waffle iron did you use?