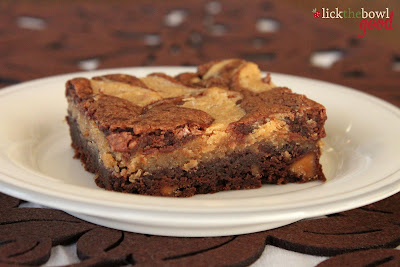 Today my older brother, Joe, turns 31. Happy Birthday Bro! He likes to call me "sis" so today on this blog (even though he doesn't read it) I get to call him Bro. :-) My brother drives me crazy. He's loud, talks too much, asks waaay too many questions (especially while watching movies) and is very opinionated, even about stuff he has no experience in. Here's an example of that: He gives me baby advice left and right though he has no kids nor has he ever raised any. He says babies have sunken in skulls because their mommas pull the pacifier out of their babies mouths too fast, creating a suction that in turn sucks that "soft spot" in and they only way to push it back out is to press on the roof of the babies' mouth with your thumb. One night he was inspecting Hayden's head, looked it up and down from different angles, then said, while nodding, "he's got a good head". I don't know where he gets his information but he means well and it makes us laugh because he's so serious about it. He's a pain in my rear but I wouldn't trade him in for any other. He's a giver, a lover, very protective of his loved ones and will give anyone the shirt off his back, or in this case, the hat off his head. 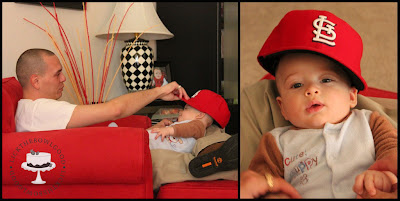 My brother Joe playing with Hayden. They're pals for life.

My brother was held back in school in the first grade, so even though he's a year older we have always been in the same grade together. We had the same teachers, the same friends, the same homework- you get the picture. We've always been close because we couldn't get away from eachother. haha! When we walked home from school, he would walk behind me and light matches and throw them at my feet. It used to scare me, but he thought it was funny. That was just him being an older brother. We also used to play with sling shots in the back yard and play "classic" Nintendo together conquering level after level. Our game of choice was "Contra" and one of the codes to boost your super power was "up, up, down , down, left, right, left, right, B, A". I don't know why I still remember that, but I do. 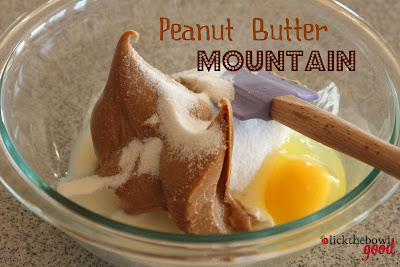 Another brother/sister moment, I remember was when we made the neighborhood go dark. My brother had a pellet gun and my grandparents lived three houses in from the corner. On the corner and across the street was a street lamp. He and I parked out on the front porch, pumping up his Wal-Mart purchase and aiming at the street lamp. Peering together through the scope, we decided on a particular spot we would aim at. He took several shots, then it was my turn, then back to him. I don't think we actually knew what we were doing, we were just shooting because we had nothing else to do and it was rebellious. Then all of a sudden, "POP", out went the light! We both looked at eachother in shock then ran inside playing innocent. Yeah, we were careless, but we were kids and the light was fixed a couple days later. 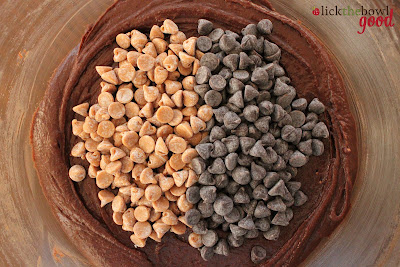 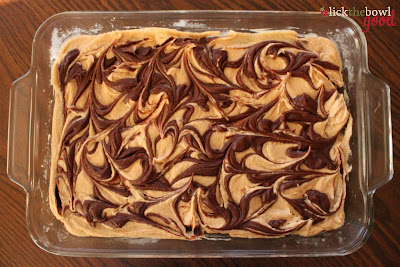 These days, I don't get to see my brother as often. He's a trucker and lives across the state, but when he makes a run into town he makes time to spend time with his family. He was in town this past weekend. He spent most of his time eating gummy candy and Pop Rocks and watching cartoons on the Internet. That's his thing. He can eat sugar straight out of the jar, and eats candy and chugs sodas ALL day long, but he doesn't like glaze or frosting on cakes, because they're "too sweet". He's a contradiction, but that's who he is. And he loves peanut butter. For his birthday treat, I decided to make him peanut butter marbled brownies even though he requested rock candy. I'm not a big fan of PB and chocolate but he loves it. As I went to cut them into squares, they fell apart and onto the counter. I was bummed with their appearance because they weren't as perfect as I wanted them to be, but that's the way it goes sometimes. I kept one to take pictures of and sent the rest home with him. Mr. H and I shared it together with a scoop of Tin Roof Ice Cream and chocolate sauce. It was fudgy and amazing!

For The Peanut Butter Layer:

For The Chocolate Layer:

In a large bowl, mix together melted butter, 2 cups white sugar, and vanilla. Mix in the remaining 3 eggs one at a time, beating well after each addition. Combine flour, cocoa, baking powder, and salt; mix into the batter.

Remove 1/2 cup of the chocolate batter and stir 1 Tablespoon of milk into it to thin it out slightly; set aside. Stir the chocolate/peanut butter chips into the remaining batter.

Spread the chocolate chip batter into the prepared pan. Spread the peanut butter filling over the top. Drop the reserved chocolate batter by teaspoonful over the filling. Using a knife, gently swirl through the top layers for a marbled effect.

Bake in preheated oven for 35 to 40 minutes, or until a wooden toothpick inserted near the center comes out almost clean. Cool completely, then cut into bars. 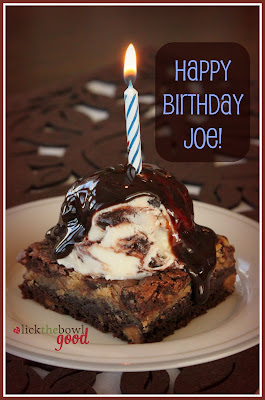 Sweet text about your brother!
The cake looks so yummy!!!

Happy Birthday to your brother! In his defense, I must say that I knew a lot more about child rearing BEFORE I had children and never hesitated to give advice!! Boy, did I have a lot to learn.

Great stories! I always wanted an older brother - they seem like so much fun! Hope he had a great birthday. Love the photos of him and Hayden together.

Aww sounds like you have a lovely brother/sister bond. The brownies look gorgeous and if they fell apart its probably becuase they were so moist and fudgy. They look divine!

Awww, it sounds like you and your borther had ome great times together. :)

I don't see anything wrong with the presentation of this marbled brownie. It looks absolutely perfect :)

P.S. i agree with your brother on the frosting/glaze thing. Most frostings and glazes I've made are waaaaaay too sweet and I can't handle them either.

Yep, I have a bro' like that. But, I love him-- quirks and all. I can tell you love yours, too. I'm not a HUGE fan of PB in my desserts. But, maybe I am, because when I made my peanut butter frosting stuffed chocolate cupcakes, I admit that I ate more than one. These look great! What a great gift for your bro', and that ice cream....yummy!

Becca- this is one if the only pieces that was presentable. There were a lot of casualties. :-(

Yesterday was my sis's birthday too! she is 20 months older than me, and she is not well, I miss her as we don't live close...Family is everything isn't it?

But I had to come on your blog and tell you that I got a ruffled edge cake stand just like the one you have Hayden on in your header, I bought it at an estate sale yesterday for $20, did I get a good deal, I don't know if it is Fenton or real milk glass but it sure is nice...I love the ruffles, I checked e-Bay this morning and they are going for twice what I paid so I think I did OK...

I just adore your stories about your brother!!! Too funny Monica! What do you think he would say if he DID read your blog?

And yet again, a lovely, scrumptious, d'lish looking goodie you baked Darling! I can't believe you only kept ONE....I think I would've made a double batch just to have a whole pan for myself! :-)

What a sweet post for your bro! I wish he could read it!!

My sister loves peanut butter and chocolate. Her birthday was Saturday the 18th. We also don't live close to each other but we are close sisters and I love her. When we do see each other it's like no time has gone by. Probably because we talk on the phone so much!! I wonder how well these would do shipping them to Arizona?

Tried this recipe and turn out really good and easy to make! Thank you!