Chocolate and Gingerbread- They Just Go Together 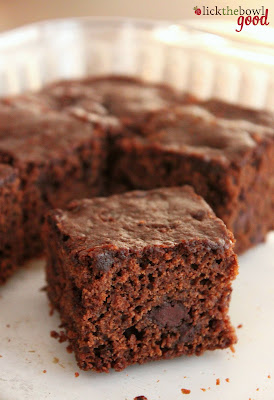 Happy New Year! I know we're already one week into the new year, but this is my first post in 2012 and it's a good one. Usually on New Year's Eve, we are at home, watching the ball drop, drinking sparkling apple cider and sharing a kiss or two...with family. Party animals we are not! We don't like crowds and we don't drink much so we opt to stay home- it's cheaper and safer that way. This year was a little different though. My mom suggested we have a small get together at our house and it sounded like a good idea since we spent Thanksgiving at my in-laws and aunt's houses and my mom's for Christmas dinner. 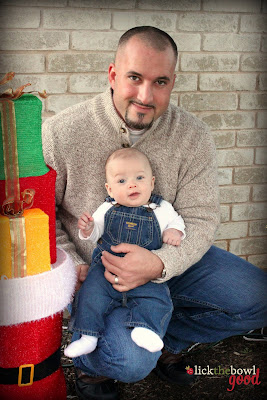 Hayden and Mr. H posing next to one of the Christmas decorations. He looks so darn cute in those overalls!

It was a simple gathering and everyone brought a dish or two including the traditional black eyed peas, 7-layer dip, pork tenderloin sliders, crudite and dip, chocolate fondue and this chocolate gingerbread. It was a feast and no one went hungry. Ever had chocolate gingerbread? Ever heard of it? I hadn't. A couple weeks ago I was craving gingerbread, which is a rarity, because I tend to not like the stuff. In fact, the only gingerbread I've ever really liked is the one from Souper Salads and it comes from a mix (sad but true). I even went as far as buying ground ginger and molasses then the neighbor came over with a loaf as a Christmas gift so I didn't make any. It was good but I kept thinking it was missing something. That something was chocolate! I consulted Mr. Google and came across a few good looking cakes and they all pointed back to this recipe from Martha. 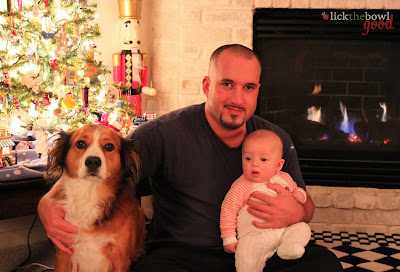 Autumn, Mr. H and Hayden- Hayden is wearing his daddy's Christmas outfit from 31 years ago. It was a little long, but it fit!

It is a simple recipe and it came together rather quickly. It baked up while Hayden and I showered together and when we got out, the house smelled divine. It doesn't look like much, mostly because it's brown on brown, but it was delicious. The cocoa adds a nice dimension to it, almost like a spiced chocolate cake but not as rich and decadent, afterall it's still bread. It's moist and tender, spicy and warm from the molasses, cinnamon, ginger and pumpkin pie spice and the chocolate chips add a bit of sweetness. I will definitely make this again. And if you like gingerbread and want something different, give this one a try. Heck, if you don't like gingerbread, try adding chocolate and see what happens. You might just change your mind. 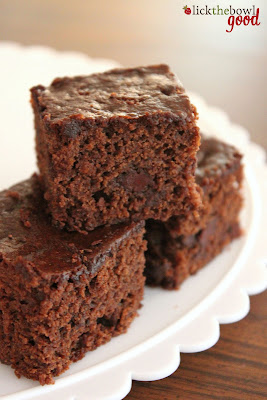 Preheat oven to 350 degrees. Butter an 8-inch square baking dish or spray with non-stick spray and set aside.

In a medium bowl, whisk together cocoa, flour, ginger, pumpkin-pie spice, cinnamon and baking soda and set aside.

In a large bowl, whisk together butter, brown sugar, molasses, egg, and sour cream until smooth. Add flour mixture and stir just until moistened, being careful not to overmix. Stir in chocolate chips. Transfer batter to prepared pan and smooth top.

Bake until a toothpick inserted in center comes out clean, 30 to 35 minutes. Transfer pan to a wire rack and let cool completely. Once cooled, cut into 16 squares and serve from directly from dish. 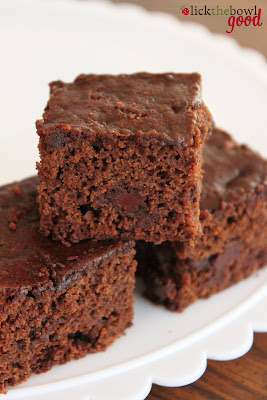 Cute pics...I love it that he was wearing his daddy's sleeper:-). I love gingerbread, but have never had it with dark chocolate - only white. This sounds good though..especially with the chips.

Lovely pics, and the Cake looks amazing too :)
Happy to be your follower :)

Just to give you a heads up: It's difficult to concentrate on your posts when Hayden is in the picture(s)!! Love the overalls!!

Hayden looks so adorable! I love his little face and cheeks :P

Chocolate Gingerbread sounds delicious! I've never actually had gingerbread as a cake or bread (only in the form of cookies) so I'll hae to try this sometime.

I love chocolate and gingerbread. Thank you for this recipe. I will definitely have to try this!

Mmmmmm...this looks yummy! Love the photos of your sweet little boy - especially in those adorable overalls!

My mom used to make a peach-upside-down-gingerbread cake that was so yummy. I had totally forgotten about it until now.

Oh, and how about a little look at those pork tenderloin sliders? That sounds interesting. Enjoy your weekend!

yum! i've never thought of this combo before, but i love the sound and look of it!

I craved gingerbread for the first time this year! It is a pear gingerbread upside down cake from Simply in Season that I made last year...it is delicious, even using home canned pears!

And ANYTHING + chocolate is good in my book!

I made ginger biscotti, and neither of my men would eat them. Boo hoo. Hmmm, I should try adapting it with chocolate. Sounds wonderful, Monica. Your party sounded far more fun than ours-- which was zilch. Hayden, oh what a cutie pie. Love the pic of dad and son. Both of them.

I'm not a gingerbread fan either...but should try this combo looks yum!

looks very yummy! love the spiciness of ginger and the sweetness of chocolate!

Aww, Hayden is so cute and getting so big!

Im not real partial to gingerbread either but this looks good to me. My husband and I had a little New Years Eve Party that was the night before New Years, it didn't last too long. I was pretty happy about that cause I don't know how we would stay up till 12! LOL

Im thrilled and flattered that you stopped by my little space!Love your blog...great recipes and photographs.

oh he is filling out so nicely...gosh he is cute, that baby...

Darn how I wish you lived closer so I could love on that cutie! How does he keep getting more adorable?!

And gingerbread with chocolate?! I love that idea. I've never paired them, but I think it would help me enjoy gingerbread a bit more!

Pretty sure I love just about anything with gingerbread but I definitely agree that chocolate goes very well!

Love the pictures of baby Hayden and Mr. H (and your doggy too!). Baby H is as cute as a button!

You are so blessed, I'm so happy for you and your family.

oh my goodness! baby hayden is getting so big now! and he's SOOO cute :)

Good looking guys in your life!!

I hope that 2012 is filled with surprises. That is one cute little man who will bring you nothing but joy throughout the years.

I've had a taste for gingerbread for days... maybe I'll get up the energy to bake a batch this weekend!

Hayden looks so cute in his daddy's Christmas outfit! It's so special that his family kept the outfit.

I have never been one for gingerbread, but I think that's about to change and all because of you! I'm just now catching up on blogs and since I'm a chocolate sort of gal, your last two blogs are music to my mouth! Yum yum, thanks.

Looks gorgeous! I love the melty choc chips dotted throughout. You ahve such a beautiful family. Happy new year!

The cake looks SO moist!! But, holy macaroni, Hayden has REALLY grown...what a BIG boy.

Oh Hayden looks so cute! What is it about little boys and overalls?!? Oh and this cake. I would have never thought to combine gingerbread and chocolate but this sounds wonderful! PS I have fond memories of going to Souper Salad with my Mom as a kid and being so excited for the gingerbread! Thanks for reminding me of this memory by sharing this post!