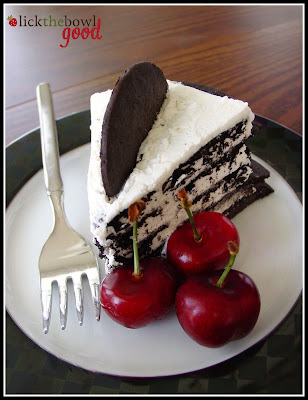 Well my little man turned 2 weeks old today. It's hard to believe the days have just zipped on by. He's changing so much from day to day, and definitely developing a personality of his own- he is quite the funny guy. Things have been going well so far, but we have been busy. When I was getting bi-weekly ultrasounds, they noticed he had enlarged kidneys. From week to week, the size of them changed (sometimes larger, sometimes smaller), but they continued to keep an eye on them. 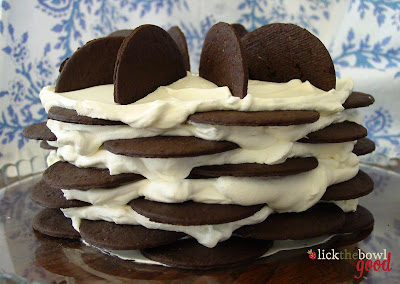 In order to check on his kidneys after he was born, we had to get another ultrasound last week. The result of that was that his right kidney is still slightly larger than it should be. So on Tuesday we had an appointment to have dye injected into his bladder to see if there was any back flow from his kidneys to his bladder. We also have been the pediatrician twice and the cardiologist too. After H was born the doctors noticed he had a heart murmur. Luckily it's the "good kind" to have and should close on it's own as he grows. Lots of appointments and baby drama but everything has turned out to be okay. Hopefully he won't have to go back to the doctor until November for his follow up with the urologist and his 2 month check up. Keep your fingers crossed! 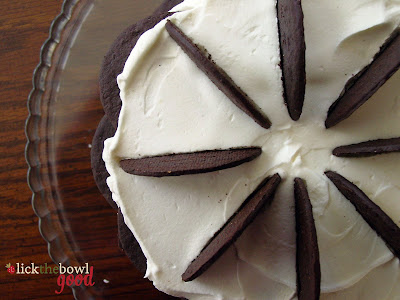 Other than that, things are great. We are still trying to develop a sleeping schedule though. He's a great sleeper during the day but wakes and wants to eat every 2 hours at night- it's exhausting. He's so worth it though and when I see that silly grin on his face I just laugh and have to remind myself that losing a couple hours of sleep at night is not a big deal in the grander scheme of things. Yes I'm tired, but what new mother isn't? It's just part of the deal. Can I get an Amen? 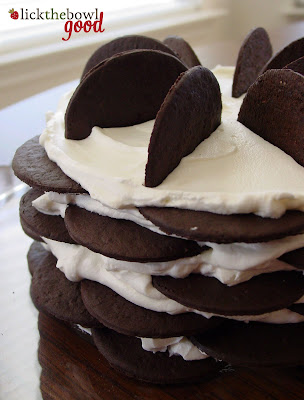 All that being said, I don't have much time these days to bake or cook or do much other than washing bottles or reheating something in the microwave. I've made a batch of brownies that were pretty good but I didn't photograph those. I will definitely be making them again so they will get blogged eventually. This dessert is a no-bake ice box cake. It's one of the first desserts I ever saw on food blogs years ago. I don't remember which blog it was from, but I knew it looked amazing and I wanted to make it. I made this last summer and just winged it. All it is is chocolate wafers and sweetened whipped cream. As you layer the cookies and cream and refrigerate the masterpiece, the cookies soften and you can slice it quite nicely. You can use just about any thin crisp cookie you want, and flavor up the whipped cream with extracts or espresso powder or maybe even add some mini chocolate chips in there. My only suggestion would be to lightly sweeten the cream since the cookies are already sweet. 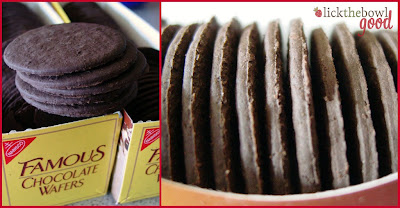 So no real recipe today. You can make this as large (to feed a crowd) or as small (to feed one) as you need to. Just layer cookies with whipped cream and refrigerate overnight until softened. Slice and enjoy! And if it's still in the 100's where you live you'll appreciate not having to turn the oven on to make this. 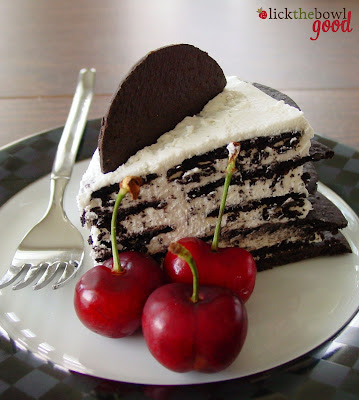 You know I wouldn't talk about my babe and not share a picture. Here he is sleeping in my arms a couple nights ago. So dang sweet! 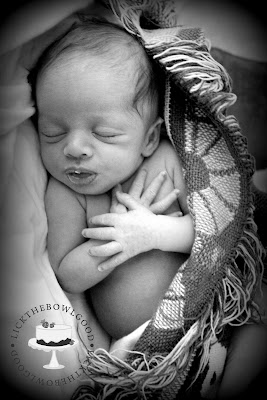 I have family in town this weekend to meet Hayden so we will be busy. Hope you all have a sweet weekend!

Sounds like a busy/happy household, I'm very happy for you. I hope his tests turn out well, baby drama IS stressful, as is his backwards schedule...all part of new parents for sure. I have been looking at this whipped cream, chocolate wafer idea for quite a while and I've never seen this version (stacked like a cake), very clever. I sure want to make one. Baby H looks SO CUDDLY!!!

I made an icebox cake over the summer and used those same thin cookies. They work great! Your baby boy is soo cute Monica! All I can say is enjoy because the time goes fast!

Oh my goodness! That photo is so precious!

It's down to the 60s today in Delaware (40s in the morning) so I'm actually looking forward to turning my oven back on! However, I've never made an icebox cake and it looks like a good dessert when I'm feeling exceptionally lazy... plus I love whipped cream!

I have a son with the same kidney issue. I can tell you that he is a happy healthy 17 yr old and his kidney hasnt been an issue ever. We do the ultrasounds once a year just to be sure but he has had zero problems. your little guy is precious!

Yes, you can get an AMEN! Being a mother is exhausting but achingly beautiful work. And my best friend has the same kidney issue, and she's never had any problems at all her entire life. Your little man is so incredibly sweet. And, oh, the recipe looks delicious too. :)

Praying for you all as H-Man goes through his tests. Email me and let me know how they go! I couldn't make that cake or I'd eat the whole thing by myself!

That's a lot of doctor appts for a little guy...so glad everything is checking out okay! This cake is just genius...wish I could find those chocolate wafers. I'll have to keep looking.

Such a sweet post - thanks for sharing Hayden's picture... he's a cutie-pie!!

Believe me, you're going to get a lot more tired before the little man starts sleeping through the night, but you're right, that's the way it goes (AMEN!).

I'm glad everything is okay with his heart. We just found out Mr. 18 year old has a small hole in his heart. Right after he was born the pediatrician said he thought he heard a slight murmur, but later determined it was nothing. Fast forward 18 years and we find out there really was a hole. But the cardiologist told us there's something like 1 in 6 people walking around with the same hole.... very common and nothing to worry about. Interesting though.... he's been to the doctor every year, had all kinds of sports physicals, and nobody every said a word about it.

Okay, enough from me... hope you're catching lots of cat naps during the day.

I love these cakes, I try not to make them too much because my husband and I eat them so quickly, but man are they delicious!

Amen! Glad to hear that everything is okay...being a parent is equally terrifying and exhilarating at the same time, isn't it!? Beautiful shot of Hayden and tasty-looking cake there, too =D

It brings such joy to my heart to see you with such a sweet blessing, that you've waited for, for so long (: Praying all goes well!

Amen!!! This cake is really pretty! And easy! And who doesn't love those??? I'm glad things are going well with your little man. I am REALLY going to get over there to meet him soon. Or you come to me...or whatever. Either way, I need to meet him!

You know that sleepy mom, wired baby thing? Welcome to the Club! You're a full fledged member :-)

Such a sweetie little baby!! This recipe kills me, being on a diet SUCKS. It looks amazing, seriously a work of no bake cake art!

I'm glad all is well in your house. Just remember, you may be tired now, but you can always use it as blackmail once he becomes a teenager ;) "Remembr, you owe me for all those nights I never slept!"

Oh my! What a beautiful cake...and baby of course!

He is so precious!! Congratulations on the new addition! I'm late yes, but for some reason I don't see your post in my blog feed anymore (gotta figure out why) But I am truly happy for you and Mr. H!

I pray God continues to bless you and your beautiful family!!

I'm impressed that you even managed to make this. It's amazing how much babies need their moms. Sleep deprivation is part of the price, but I do know how grateful you are to have Hayden. It's going to be fun watching him grown, as you share it on your blog.

You are amazing Monica! Keeping up with your blog as you juggle all the "newness" of being a mommy...I'm honored and very impressed!

Baby H looks happy, adorable and heathly. Keep up all the good work. And know that when moment is hard, just around the corner you will have an absolutely precious experience full of love and admiration that makes it all worth it. I can sense that you already hold this in your heart. :-)

Oh, and of course the cake looks fabulous! I must try this recipe myself!!!

He is so beautiful! Monica, he looks so much like you!

The baby picture is adorable! What a sweet moment to capture!

I really love your blog... I swear I'll try your recipies this year!!

Aaaa! Congrats on your beautiful baby Monica!! He is just beautiful. And the cake doesn't look too shabby either! ;)

Glad to hear you are both doing well, the photo is so adorable. That cookie cake looks amazing.

Gosh I haven't had an icebox cake since I was a kid! MMM looks so good!

I love the baby picture first and then the cake!

You get an amen! All so worth it and what an easy and beautiful cake. Great idea!

ooooh, just noticed your new addition today; the famous chocolate wafer/whipped cream idea...neat!awhile back we made ice cream sandwiches with them... Target makes a great all natural vanilla bean ice cream :9 you just fill them, cover w/plastic wrap, place in freezer... next day; cookies are soft and ice cream is firm... very nice :) your little guy is a cutie~