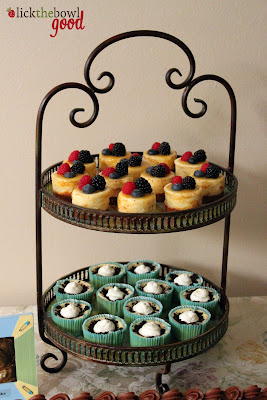 This is baby shower recipe #2! I thought twice about sharing this recipe with you guys, not because it wasn't tasty, but because I had a few technical difficulties with it. But I had a few requests from guests as the shower to "please post it on your blog" so here it is. There is nothing majorly wrong with it, I'm just a little OCD and was bothered by it's appearance. You see, my cheesecakes sunk in the middle. Some of them weren't so bad, while others had major craters in them and were just plain ugly. I didn't have the heart to serve those to my guests, so we ate those at home and served the better looking ones at the shower. 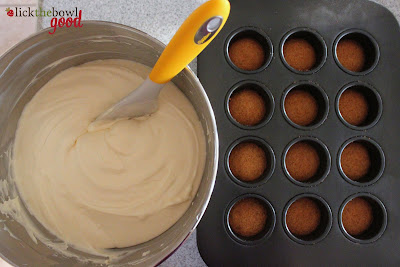 This recipe comes off the box of my mini cheesecake pan I got from Williams-Sonoma Outlet last year. They were originally $32 each, but were on sale for $14.99, then were marked down another 50%. So I got two pans for half the price of one- score! I've been waiting for just the right occasion to use them, and my baby shower just happened to be it. Of course, you don't really need a special occasion to enjoy mini cheesecakes.

One of my other issues with this recipe was that it made way more than the recipe stated. Normally that's not an issue, but when you have a specialty pan and way too much batter, how are you supposed to bake them? The recipe was supposed to make 12 cheesecakes, but I could have easily gotten 18 out of them. Unfortunately and fortunately, I doubled the recipe. One batch came out fairly decent, the other sunk horribly and the remaining batter got turned into cookies and cream cheesecakes with a whole Oreo acting as the crust. I made those in cupcake liners, which was far easier than using the pan, only not as pretty. It turned out to be a good thing there was extra batter though, because in the end I still had a substantial amount of cheesecakes to serve at the shower. 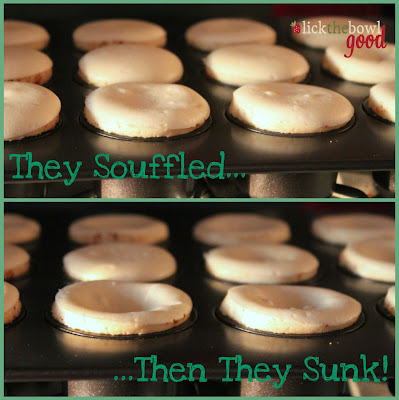 They actually sunk a lot more than that after they cooled!

As I've mentioned, oh I don't know about 500 times already, my cheesecakes sunk in the middle. Note To Self: I think a way to combat the "souffle" action of the cheesecakes would be to not overbeat the batter and to bake them at a lower temperature for longer. To make up for this, I decided to dollop a little lemon curd in the center and top with fresh berries. No one was the wiser and the little divot actually created a little cup to hold all the toppings in. The Oreo ones were topped with a little sweetened whipped cream. The ones topped with berries disappeared rather quickly so I didn't get to taste those, but the cookies and cream version was creamy and tasty. The sunken ones we had at home were eaten plain, but would have been great with a little pie filling. I also turned a few stragglers into a cheesecake milkshake. Yes, it was good! 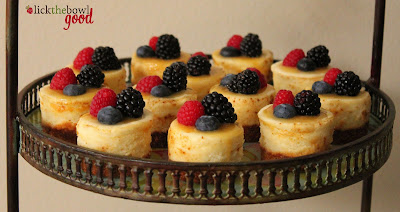 To make crusts: In a small bowl, stir together the cookie crumbs, sugar and salt. Add the melted butter and stir until combined. Divide the mixture among the cups and, using your fingertips, press it evenly into the bottom. Bake until the crusts are set, about 10 minutes. Transfer the pan to a wire rack and let cool completely. Reduce the heat to 300’.

To make the filling: In the bowl of an electric mixer fitted with the flat beater, beat the cream cheese on low speed until smooth, 2 to 3 minutes. Increase the speed to medium-low and add the eggs one at a time, beating well after each addition. Add the cream and beat until incorporated, about 1 minute. Add the sugar and salt and beat until incorporated, about 2 minutes, stopping the mixer occasionally to scrape down the sides of the bowl.

Pour the batter into the crusts, dividing it evenly among the cups. Bake until the cheesecakes are set, about 20 minutes. Transfer the pan to a wire rack and let cool completely. Refrigerate for at least 2 hours before unmolding.

NOTE: This recipe makes more than it states. It should make 12 mini cheesecakes, but I got about 18. So plan accordingly.

*If you want to make these but don't have a mini cheesecake pan, line a standard size muffin tin with paper liners. Proceed with recipe as written above, but bake for 30 minutes or until set. Allow cheesecakes to cool completely in the pan before refrigerating for at least 2 hours or overnight. Served chilled or at room temperature. Makes 12-18 mini cheesecakes.

For Oreo Cheesecakes: Line a standard size muffin tin with paper liners. Place a whole Oreo cookie on the bottom to act as the crust. Pour cheesecake batter over the top of the cookie. Top each (unbaked) cheesecake with about a half teaspoon of crushed cookie crumbs. Bake for 30 minutes or until set. Allow cheesecakes to cool completely in the pan before refrigerating for at least 2 hours or overnight. Served chilled or at room temperature. Makes 12-18 mini cheesecakes. 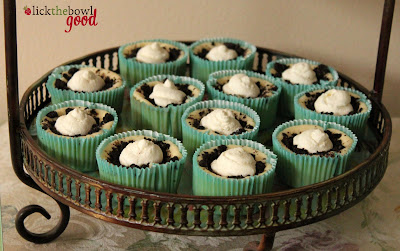 So cute! What a great idea.

Ah.. don't worry about being sunk, it sometimes happened :) and anyway, your mini cheesecakes looks wonderful, I would love to give the recipe a try!

What a cute idea!

The craters can be filled with our favourite toppings. I wonder if anyone knows how to prevent this, mine were pretty wrinkled:D

Awww, they look co cute. And you're right, they don't look sunken at all with those perries and cream on top. Yum!

These looks so yummy!!

I come from a family where more is better -- not a problem. No apologies necessary.

I've made these many times, and sometimes using a Vanilla wafer as the 'crust' and they all 'sink' to one degree or another. I have always thought that that was what they were suppose to do, thus, providing a perfect little divit for curds, fruits and other toppings. You're look beautiful and by the evidence that they were gone quickly--they must have been delicious as well ! Nisey

DUDE. YUM. Can I use mascarpone and half n half? LOL. It's what I have on hand =P

But they tasted so good!!!

This happens to me too (and I bake mini cheesecakes for a baking stall I have at a farmers' market every week!). It doesn't always happen, just sometimes. If you discover why, do let me know. I'll let you know if I happen upon the reason in the meantime. I love, love, love your blog by the way.

try adding about 2 T of flour to the batter. helps stabilize the cake. and congrats on your little Mr H!

I bought the W-S mini pan for 6 cakes and had the same issue. I didn't think far enough ahead to wonder what to do with the rest of the batter while the first batch cooled so ended up making a thin cheesecake in my standard spring form pan. The thin cake came out perfectly, no sinking. I am wondering if letting the batter "rest" a bit after mixing helped. More experimenting to follow.(YUM)

I've done cheesecakes many times and at first they usually came bad, then I figured that first to beat cream cheese with sugar and heavy cream and leave the eggs for last would improve the way they came out. This is because if you over beat it, the eggs fill the cheesecake with air and this causes the cracks and probably the sinking of the center! also i now use water bath to bake the cheesecakes and this helps for the cheesecake to cook slowly and avoid the cracks! :) (water bath is just taking a bigger pan and putting it on the lower part of the oven)

Hope this helps you for a next time you do cheesecakes! and they didn't came that bad, so cheer up! :D

Malalu is correct. Beat the cream cheese until smooth (you should scrap down your bowl several times. If your cream cheese is not smooth prior to adding the sugar you will have lumps in your batter) add the sugar, scrap the bowl. Add your heavy cream then add your eggs one at a time, beat just enough to incorporate your eggs. The eggs is what gives your cheese cake the ability to rise. Use a water bath, just like Malalu suggested and when the centers of the mini cheese cakes have just a slight jiggle from you shaking your pan gently, turn the oven off. Leave the mini cheese cakes in the oven the same length of time it took to cook them. Example if it takes 30 min for the mini cheese cakes to have a slight jiggle in the center, then you want to leave them in the oven for 30 mins. IMPORTANT, crack the oven door open a little bit, I use a pot holder to hold the door open. The reason for the sinking of the cheese cakes is because you went from a hot temperature to a cold temperature. You have to cool your cheese cakes slowly. Hope this helps