Continuing on with another Pillsbury dessert, today I share with you a vintage pie recipe. Every once in awhile when I'm at my in-laws house, I'll grab a cookbook off the shelf and start reading, looking for inspiration. My cookbook of choice was the Pillsbury's Bake-Off Dessert Cook Book, copyright 1968. There were a lot of good looking recipes in there and surprisingly quite a few of them included marshmallows. Apparently in 1968, marshmallows were the big thing!

I chose this recipe for Mocha Frappe Pie for a reason, other than because it made me salivate. When Mr. H and I were first dating (11 years ago) he introduced me to Starbucks Mocha Frappuccinos- it was love at first drink. If for some reason, you live on another planet and have never had a Mocha Frap, it's a blended coffee drink with chocolate syrup- it's frosty and addicting. But before I ever had the icy treat from the coffee shop, I had the milky bottled variety. We used to distinguish the two by calling the blended version, the "fresh" Frap. 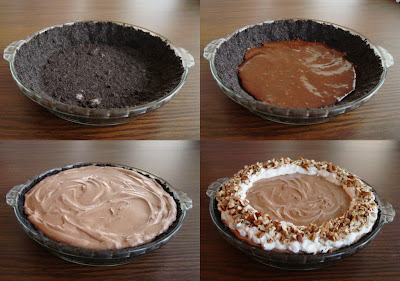 A typical date night for us consisted of dinner at T.G.I.Friday's or Chili's, because as teenagers that's all we knew, as well as a sappy romantic movie at the theater. Afterwards we'd grab a "fresh one" for dessert and drive around town wasting gas without a care in the world. They were perfect evenings. On school days, he used to pick me up and greet me with a cinnamon raisin bagel or a Power Bar and a Frap for breakfast. These days we just grab one while we're out and about running errands, but making this pie reminded me of our growing love for eachother. This was my way of giving him the freshest Mocha Frappe of all.

The combination of flavors brought back some good memories. This pie is creamy and sweet with an almost mousse-like filling, which is a contrast from the sticky, gooey chocolaty marshmallow layer on the bottom of the crust. The original recipe called for a pastry crust but I knew a chocolate cookie crust would be a perfect match for the mocha- it was fantastic. I also may have added a bit more of espresso powder because I like a pronounced coffee flavor. Topping off the pie was a fluffy ring of unsweetened cream and chopped toasted pecans. This was a special pie, for a special man.

To make the crust: Preheat oven to 375 degrees F. In a medium bowl, mix all ingredients until well blended.

Press firmly onto bottom and up side of 9-inch pie plate.

To make the filling: In top of a double boiler, combine marshmallows, sugar, evaporated milk and instant coffee/espresso powder.

Cook over boiling water, stirring occasionally,until marshmallows are melted. Remove from heat. (This can be done in the microwave, but be sure to keep a close eye on it so it doesn't boil over.)

Chill at least 2 hours before serving. 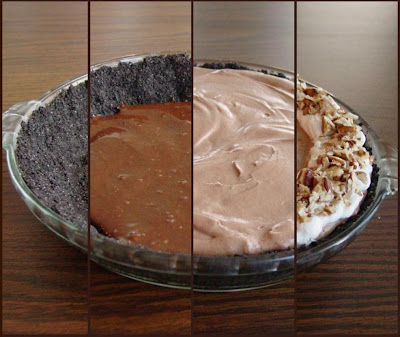 That must be one delicious dessert, especially with such a lovely memory attached to the making of it.

Mcha mocha mocha! I smy mom's favorite flavor for everything! If I make this for her she'll die! Thanks! I adooore the final picture of the collage! Genius! (:

Aww, I liked the story about your and the Mr. :) And the pie sounds yummy. I'm totally addicted to peppermint mocha fraps and my sweet mom will occasionally drop a gift card in the mail to me to help support my habit. I guess she's an enabler? LOL

Oh, that last photo with the 4 steps together is awesome.

That's it! - I'm getting on the next plane to Texas and coming down to see you Monica!....this pie is just gorgeously delicious!!!! :-)

I'm addicted to mocha drinks and love Starbucks mocha's!!! What a sweet story behind your dessert. The pie looks delicious and I love the mocha and marshmallow combo!I also enjoy reading through old cookbooks. You can really find interesting recipes and desserts in them.

I am also a Mocha 'fresh' Frap lover. I try to recreate them at home.

Oh YUM. The pie looks awesome, and I can't wait to try it! Such a sweet story, too. And I love the collage photo at the end!

We share planets. I love Mocha Fraps, and so does my waistline.
Great call on the chocolate crust. Chocolate and mocha are meant for each other. You're having fun on Picnik! What a great idea!

looks delish! how do you put the pics together in a group of 4 together? like a collage? really cool effect!

Not a coffee lover in any form but I love the pie collage!!!

i LOVE how you decorated the edge! i have to steal that. i am making those lemon-sour cream muffins w/ something else added in LOL

Oh God yum. And the collage at the end is too cool!

Monica - your photos never cease to amaze me - and that pie......oh momma you'd better believe I'll be making that soon!

wooow monica this looks delicious... and the picture you made with the pie on different stages looks amazing!!!
I made today some puff pastry with chocolate chips sticks (don't know how to explain it better), for my best friend who is going to live to Israel...
Hugs
Daniel

Your pie looks amazing and I can't wait to give it a try. However, it is your Collage Pie that makes me just bow down in unworthiness. Amazing as usual!

Gorgeous mocha pie, and I love your "collage photo"! Very clever! I have that same old cookbook that you used and I love its retro factor. Great post.

Mocha Lite Frappuccino...that is my drink! I love it. Your pie looks beautiful and delicious. Pilsbury from 1968...how cool! I love your collage pie picture. That is really helpful..thanks:)

awww! You guys were cute!!!! (are cute!) I live in the PACNW and honestly there are a million places up here that have DELICIOUS coffee. My current fav is a german chocolate frappuchino! NOM!

Your collage photo is genius!!! This looks delicious.

What a sweet story! I love the growing love. And I love the collage pie at the end. Thanks for sharing this recipe and a little piece of your past with Mr. H.

Sweet, sappy and sugary. Just how I like it! Ha. Cute story! My husband would love that pie, too. (And he brings me *bucks drinks, too. Iced caramel machiattos! Yummm.)

How sweet (literally)! I think it's wonderful that you two do little things to constantly remind you of your beginning relationship, like picking up a frap while doing errands! I also have to say that I love the "Collage Pie" idea! It came out very nice! Great post!

This looks crazy good! and i really enjoyed the trip down memory lane. thanks for sharing. :)

Looks delicious and very chocolaty yet still light and moussy. I loved hearing how Mr H introduced you to new foods and brought you breakfast treats, thats so romantic :) Its amazing how foods can give us such strong memories.

I'm one of those weird ones that have never had a Starbucks, Mocha Frappe or Frappe anything from there. Shocked, right?! :)

wow! making this pie very son my husband would love me even if i made this for him!

What type of chocolate cookies did you use? Oreos?

Tracy, I used Babusco Fanius wafers, but you could use Oreos with the filling removed.

Monica,
Thank you for getting back so quickly about what chocolate cookies you used. I made this yesterday on Christmas, and it was wonderful. I look forward to making it again sometime.