Cinnamon Sugar Love and A Winner 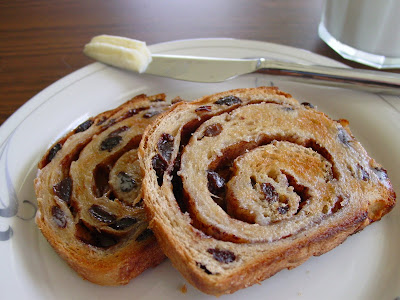 Today I bring you cinnamon swirl raisin bread. I've wanted to make this for Mr. H for years! I'm not sure why I never did, though I think it's because Sun-Maid raisin bread is so much easier to buy. That said, I definitely think that the fresher loaf, toasted and slathered with salted butter was MUCH better. Need proof? Mr. H and I finished off a loaf in two days. I made the mistake of sharing the other loaf with my in-laws. It wasn't a mistake on their behalf because they got to eat it, but we were left wanting more. 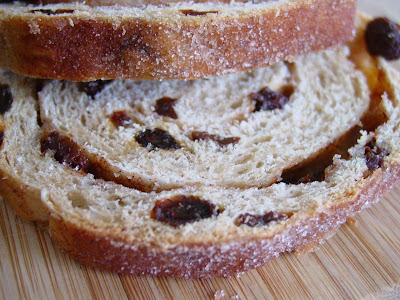 I made these loaves of cinnamon swirl raisin bread with Michelle and Ingrid. Neither one of them like raisins so theirs will just be cinnamon swirl, but we really liked the additions of raisins, leave 'em out if you don't. Or you could add dried cranberries or other fruit or nuts if you'd like. I then topped off this warm loaf with melted butter then sprinkled it with even more cinnamon sugar. Delish! 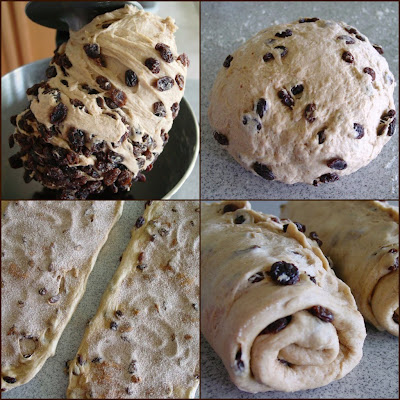 We never tasted the bread fresh out of the oven, so we only had it toasted. It wasn't too sweet, but the cinnamon flavor really came through since it's in the dough, in the center and on top of the bread, creating a nice crunch. It's not a difficult recipe but it does require some time to allow the yeast to do it's job. If you're a fan of breakfasts breads, I'd definitely give this one a try. Don't forget the butter! 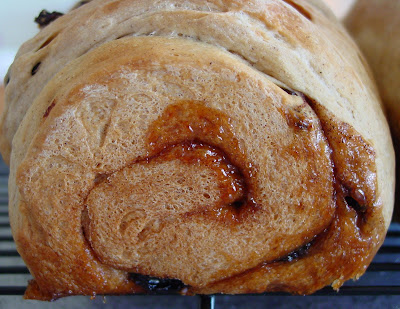 For the cinnamon sugar swirl:

1. Stir together the flour, sugar, salt, yeast, and cinnamon in a mixing bowl (or in the bowl of an electric mixer). Add the egg, shortening, buttermilk, and water. Stir together with a large spoon (or mix on low speed with the paddle attachment) until the ingredients come together and form a ball. Adjust with flour or water if the dough seems too sticky or too dry and stiff.

2. Sprinkle flour on a counter, transfer the dough to the counter, and begin kneading (or mixing on medium speed, switching to the dough hook). The dough should be soft and pliable, tacky but not sticky. Add flour as you knead (or mix), if necessary, to achieve this texture. Knead by hand for approximately 10 minutes (or by machine for 6 to 8 minutes). Sprinkle in the raisins during the final 2 minutes of kneading (or mixing) to distribute them evenly and to avoid crushing them too much. (If you are mixing by machine, you may have to finish kneading by hand to distribute the raisins evenly.) The dough should pass the windowpane test and register 77 to 81 degrees F. Lightly oil a large bowl and transfer the dough to the bowl, rolling it to coat it with oil. Cover the bowl with plastic wrap.

3. Ferment at room temperature for approximately 2 hours, or until the dough doubles in size.

4. Divide the dough into 2 equal pieces and form them into loaves. Gently press each part out into a rectangle (about 8" by 5") I pressed out my dough into an 8" x 15" rectangle so I could get more of a swirl in the center., with the long side facing you. Sprinkle the cinnamon sugar over one side of the rectangle. Now tightly roll, starting from the long side facing you. Seal the end and place in a loaf pan, seam side down. Repeat for the other rectangle.

5. Place each loaf in a lightly oiled 8½ by 4½-inch pan, mist the tops with spray oil, and cover loosely with plastic wrap.

6. Proof at room temperature for 60 to 90 minutes, or until the dough crests above the lips of the pans and is nearly doubled in size.

7. Preheat the oven to 350 degrees F with the oven rack on the middle shelf. Place the loaf pans on a sheet pan, making sure they are not touching each other.

8. Bake the loaves for 20 minutes. Rotate the pan 180 degrees for even baking and continue baking for another 20 to 30 minutes, depending on the oven. The finished breads should register 190 degrees F in the center and be golden brown on top and lightly golden on the sides and bottom. They should make a hollow sound when thumped on the bottom.

9. Immediately remove the breads from their pans. Mix together the granulated sugar and ground cinnamon for the topping in a shallow plate. Brush the tops of the loaves with melted butter as soon as they come out of the bread pans, and then roll them in the cinnamon sugar. Cool loaves on a rack for at least 1 hour, preferably 2 hours, before slicing or serving. 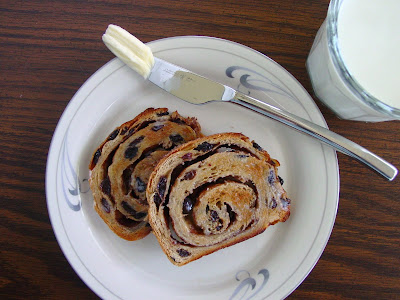 Now onto the winner of my giveaway...

Susan was recently laid off and has been filling up her time baking for others. Susan, I hope you bake lots of cakes and continue to provide a "lift" for those who need it. Enjoy your new Anniversary Bundt pan and cake carrier.

Thank you to all of you who entered the contest and who left recipes! I'm so looking forward to making some of those delicious cakes.

This bread looks gorgeous!! You picked a great bread. I love the addition of raisins.

It's not wise dropping by here while I'm on a diet..hee

THAT"S impressive! I would love to gather the gumption to do that...for now I will be in the bread aisle ;)

Seeing the photos is making me think I want some more. Lucky for us, I have a loaf in the freezer! : ) Heading to the kitchen right now!!!

Your bread turned out great! I really love how you put the estimated times at the beginning of the recipe. That's very helping when attempting to start a yeast recipe. You gotta know what you're getting yourself into!

Well we all know I love anything with cinnamon in it, so this is no different. I with the girls though I think I would leave the raisins out of mine.

I can imagine how yummy this tasted!

Ummmm...wow! I love cinnamon raisin bread but have never thought to make my own! I also slather mine with butter...is there any other way to eat it?!?!? Great job!

And congratulations Susan from Texas! You deserve that lovely bundt pan. Now I need to go buy one for myself!

Looks wonderful! I think I may have to eat an early lunch...I get so hungry looking at your creations! Please come to my house!
Kristin

I love cinnamon raisin bread. Thanks for this recipe.

Your photos are amazing despite the heavy usage of raisins. Raisins? What's next chocolate? LOL All kidding aside I love baking with you and Michelle, EVEN when it's raisin filled and chocolate, which I think is next. :)
~ingrid

Short of cinnamon raisin bagels, I think cinnamon swirl bread has to be my most favorite carb. This one looks fantastic!

Monica, that is some wonderfully delicious looking bread for sure. I just love making bread. I wish I had some of this for breakfast tomorrow morning. :)

My oh my! This bread looks really gooood! Going to have to get me some bread flour!

OvenDelights, I used all purpose flour and it worked out fine.

Two days? Amateurs! Hehe...just kidding. Looks delicious, and sadly I'm sure I could take care of the loaf in a day by myself.

I love cinnamon raisin bread and I love to bake bread but for some reason have never made raisin bread. Your's looks so yummy! Going to have to give this a try this next week!

How did I miss this one? Monica, I LOVE raisins (sorry, Ingrid)... this looks like the Pepperidge Farm Cinnamon Swirl Bread, only I know it's better because it's fresh baked.

3 1/2 hours+ seems like a long time to wait for this bread, but I'll be trying it. I can tell you right now that there will be a fight over the last few pieces at my house!

I've got a batch of brownies in the oven, but this may be my next baking project.

This looks so yummy. I printed out the recipe so when I am packing the camper for DH's nascar trip in October this will be there for him. It is one of his favorite breads!

I love cinnamon raisin bread and have always wanted to make it. Yours looks wonderful:)

Your bread looks absolutely fantastic! I love cinnamon raisin bread-the combination of sweet sugar, spicy cinnamon and chewy and sweet raisins is so yummy! It reminds me of when my dad would make me cinnamon and sugar toast almost every morning for me for breakfast when I was younger!

Ok, now you have done it! This is one serious weakness for me and I have been know to eat many, mnay slices - eek and it's bathing suit season too!!!

Monica, I just want to reach in and grab a piece!! I just made your Shenandoah Valley Blueberry Cake and would like to post it, with my photos (which are no where near as good as yours), on my blog and link it back to you. Would you let me know if that's o.k.? By the way, I'm originally from the Shenandoah Valley!!

Happy 4th to you and yours. I'm sure it will be delicious!

I made a similar bread, last winter. I never posted it, ha! I'll bet this makes great French toast, too!
I've been very scarce these last two weeks and finally getting around to visiting other kitchens. Yours is my first stop. Nice job, as always!

Drool!! Look at that goodness oozing out of the side...oh my. I wish I had a loaf, well at least a couple of slices for breakfast this morning. Gorgeous pics as always, Monica =)

as if one could ever forget the butter--that's sacrilege! your loaf is gorgeous and appeals to me on every level, and that's all there is to it. :)

Oh wow - it looks so perfect Monica! I would definitely have hoarded both loaves for myself :)

yeah to your winner! I love the look of your bread so beautiful!!

I can't believe I missed this recipe! Your pictures are so good I can literally taste the cinnamon-y goodness! :)

I'm going to try this recipe this weekend at the ranch. This is going to be amazing baked in the clay oven! :)

Hi, This is my 1st time here, I like baking too. This bread look really yummy. I will come back more to check what you baking the next.

Hi Monica! So good to meet you at Foodbuzz Festival too. Your site is beautiful. This bread immediately caught my eye. I want to make it soon!

Hi Monica, this bread looks amazing! I haven't tried making a cinnamon raisin bread yet, but this has definitely inspired me! I follow your blog daily and just love everything about it.

OMG.
I make this at least twice a week for my family. So easy to do and absolutely the best. Better than any store bought hands down.