A Ring Around The Rosy 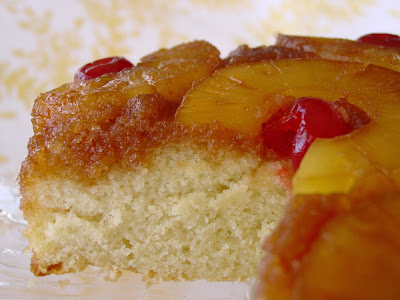 This month's cake for The Cake Slice Bakers is another Southern classic- Pineapple Upside Down Cake. I love pineapple upside down cake and I've never come across one I didn't like. It is cake after all :-) So when the bakers chose this cake from Southern Cakes by Nancie McDermott I was giddy. But it's been a busy month and I didn't think I was going to have time to make it but I managed to squeeze it in by the hair of my chinny chin chin. I don't really have a hair though, quit looking! 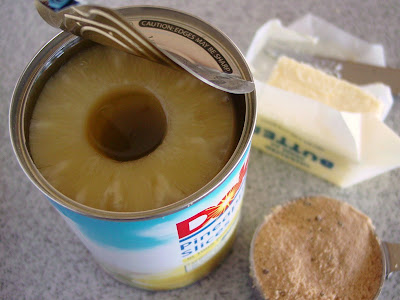 This cake didn't get the greatest reviews. Some people really liked it and others thought the cake part could have been better. I fall somewhere in between. Because of the reviews I was hesitant to make it but I decided to bake a half batch in a smaller pan that way if I didn't like the cake it wasn't a total loss. It turns out, I did like the cake but it's not the best pineapple upside down cake I've ever had. The cake topping was buttery and sweet and the fruit softened and caramelized from the heat. The part where the syrup meets the cake gets a little gooey and sticky, which is fine by me. The cake itself had a good flavor but was a little heavy and ever so slightly gummy. 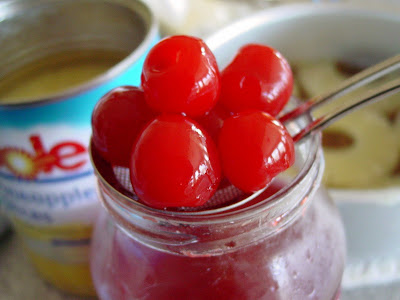 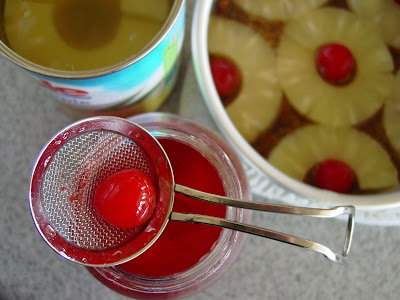 I think it could have been lighter, maybe the addition of another egg would help? I say this because I halved the recipe but I used the whole egg and it wasn't as dense as some others claimed. Also I think the method in which this cake is made also results in the texture of this cake. You add the butter to the dry ingredients instead of creaming the butter and sugar together. Maybe it doesn't have enough air incorporated into it? I don't know, I still thought it was good but this one was better in my opinion. 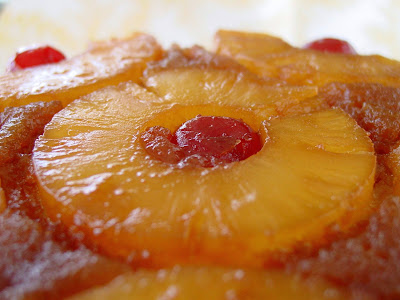 In other news, I was having a bad day when I made this cake and I thought I'd go drown my sorrows in the cake batter but it's cheery appearance and sticky cherries actually turned my frown upside down. So if you need a lift, make this cake. It's cheaper than a therapist :-) 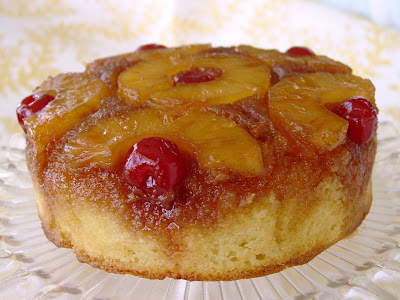 Drain the pineapple well but save 2 tablespoons of the juice for the cake batter. Melt the butter in a 10 inch cast iron skillet over medium heat. Or, put the butter in a 9 inch round cake pan and put it in the oven for a few minutes as the heat melts the butter.

Remove the pan from the oven or stove and sprinkle the brown sugar over the buttery surface. Place the pineapple rings carefully on top of the scattered brown sugar and melted butter, arranging them so they fit in 1 layer. (You may have a few left over). Place a cherry in the center of each ring, and set the pan aside.

In a large mixing bowl, combine the flour, sugar, baking powder and salt. Use a fork to mix them together well. Add the milk and butter and beat well with a mixer, scraping down the bowl once or twice until you have a thick, fairly smooth batter, about 1 to 2 minutes.

Add the egg, reserved pineapple juice and the vanilla. Beat for 2 minutes more, stopping once or twice to scrape down the sides.

Carefully pour the batter over the pineapple arranged in the skillet or cake pan and use a spoon to spread it evenly to the edges of the pan. Bake for 35 to 40 minutes until the cake is golden brown and springs back when touched lightly in the center. Cool in the skillet or pan for 5 minutes on a wire rack.

With oven mitts, carefully turn out the warm cake onto a serving plate by placing the plate upside down over the cake in the pan and then flipping them over together to release the cake onto the plate. Serve warm or at room temperature.

NOTE: I halved this recipe and baked it in a 6 inch cake pan. I also used 1 whole egg in the cake and used a whisk to mix it all together as to not overbeat it. 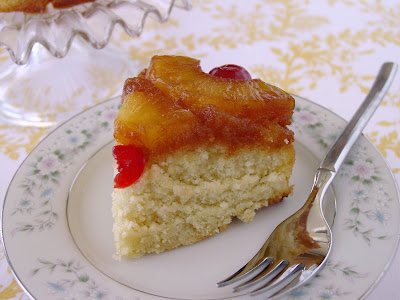 Please show some love to the other Cake Slice Bakers!

Pretty pic as always! I don't know what I did different but mine had a tender crumb...go figure! :)

The small cake looks so pretty! I really liked how it tasted and if I make it again, I will be adding 2 eggs.

Sorry to hear you had a bad day. I hope all is better now. :)

i have never tasted one of these but i've heard of them. i'm gonna try this someday soon \;)

You're right. A cake is cheaper than a therapist. That is why I'm so big haha. I need a therapist to deal with that LOL!!

This cake looks amazing. You always have the prettiest, softest photos.

I will have to check out the other cake you made. I've had only one upside-down cake in my lifetime, and that was too many years ago to remember how they taste.

As always, your photos have me drooling. I love pineapple upside down cake. One of our favourites, truth be known. I have that book. I must try this recipe to see how it turns out for me. Love your other version as well. Never thought of using fresh pineapple and strawberries, but they sound and LOOK good! xxoo

Ohhh Monica I think these are my favorite cakes. Quick and always well received. Love the smaller size too we would double it for this crowd!!

Love the look of the smaller version, so cute. Glad you liked it and that it managed to cheer you up - a slice of cake works for me :)

So pretty. I made one for a friend a while back that got rave reviews. Here's my link, but it came straight from Joy of Baking. I didn't get to eat the cake myself, but my friend really loved it.
http://oneordinaryday.wordpress.com/2009/09/20/pineapple-upside-down-cake/

Love the title of the post and the cake is very impressive.

I have not made this kind of cake in a long time,so I think it's about time to refresh my taste buds.Thanks for reminding me of one of my favorites.
Blessings,Ruth

Your cake looks beautiful! Definitely a pick me up after a bad day. I'm bummed I didn't have time to make this month's cake, but it sounds like it got some very mixed reviews. So thanks for providing a link to your favorite recipe.

your photos are always stunning Monica-i'm thoroughly jealous. pardon my typing-doing it one handed :P

I love this, just made it last week, ate every bite! Come say hi :D

I love this in mini...that slice is so cute!
~ingrid

I had the same problem...cake felt dense and gummy. And crumb wise it looks great...I'd try this again with the extra egg if only to have more of that delicious topping.

So glad the cheery cake turned your frown upside down! Your cake looks sooo beautiful! It has a lot more height. Haven't tried it yet, so hopefully I'll like it!

Oh, man! That looks fantastic! I love that part of the up-side-down pineapple cake at the top where all the juices bake in and live... Yum!

The pictures are gorgeous, and make the cake look even tastier. And the title of the post totally gave me a giggle. heeeee.....

well, it looks great. You take amazing photos. I'm too, craving something with pineapple now.

OMG, your pictures are wonderful. Pineapple Upside Down cake is my all time favorite!!!

Great job on your challenge and the end result looks gorgeous. I too would have preferred a softer crumb cake, but the topping was pretty good.

So glad this gave you a smile, Monica. I always smile when I see your photos because I can see how you look at things through your own eyes. Marvelous! I adore pineapple upside down cake. I always have fresh pineapple in my fridge, because it's something I love to eat. No matter what the critics say, I love maraschino cherries too. You make me want to break my desire to resist the temptation...and I'm growing weaker by the second. I'd like to find my tried & true cast iron skillet version of this. Where did I put it years ago?

I always make pineapple upside down cake for my Mom for her birthday it's her favorite, I think because it is so bright and cheery. I am glad it helped cheer you up, bad days are no good. Hugs :)

Monica, I wish I had thought of adding the second egg as you recommended. We really did enjoy this cake, but I agree that it could be lighter. I posted mine yesterday, but am still getting around to do this on my own blog . . . . sort of a lazy day (with pineapple cake in hand!). Your photos are perfect! Have a great day! Love, Roz

It's such a beautiful cake, I like how you made it look petite :)

Hi Monica,
I'm not sure how I even found your blog but I'm thrilled that I did! Your hobby is the same as mine ~ I've always loved to bake. Your photos are beautiful! I look forward to visiting often. I'm in the midst of packing & moving so it may be awhile before I get back. Keep baking! :-)

I sometimes skip the pineapple rings and use crushed pineapple instead. It makes a different kind of "pineappley" upside down cake.

Love how you named the cake! :) Cute. I love this cake! yum!

it sure is pretty! I am not a huge pineapple upside down cake fan, but my husband loves them!

I never used to like pineapple upside down cake but then I started making with pineapple on both side, I think it really improves the flavor plus then you can flip it on any side you want ;)

How cute is your mini cake! I'm glad you had time to bake this. The recipe was ok but could be better.

::Hugs:: I hope you're feeling a little better. You're right though, one bite of this cake would produce an instant smile. A perfectly moist pineapple cake, indeed!