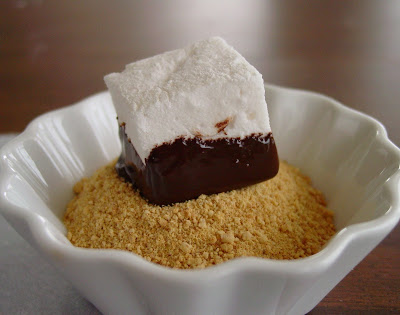 I got together again with Michelle and Ingrid this month to bring you another yummy recipe! We have kind of like our own little Daring Bakers Group. We're more like the Daring Baker Chicks though :-) This time I chose homemade marshmallows from Alton Brown. We had such great success with the pretzels last month and this recipe was no exception. These marshmallows were really tasty. 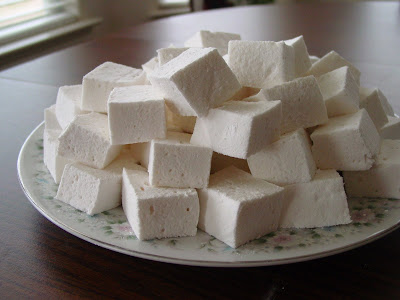 I've never made marshmallows before but they've always been on my list to make. They were so simple but the end result was impressive. I had great plans to make flavored marshmallows. Cinnamon maybe...those would be so good dunked into hot cocoa. I also wanted to colors them into springy pastel colors but I didn't put much thought into it prior to heading into the kitchen so I made vanilla marshmallows. And I'm glad I did. 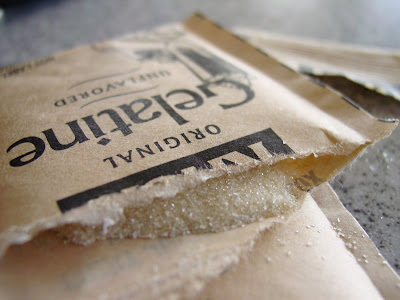 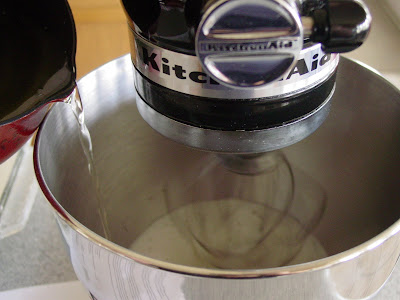 Leaving them plain gave me the opportunity to dip them into silky dark chocolate and crushed graham cracker crumbs. This was my alternative to s'mores since I didn't have any graham crackers. These marshmallows were firm but fluffy. They were squishy and jiggly, sweet and soft. Once the chocolate hardened it created a bit of a shell when you bit into it. The graham cracker crumbs added a slight saltiness and a great texture. It also kept the chocolate from melting in your hands. The hubby said these tasted like Pinwheels! 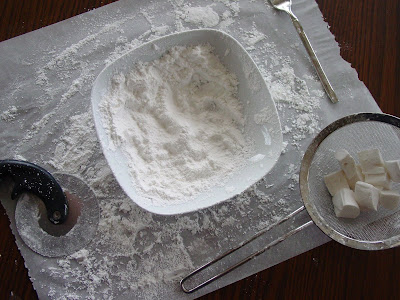 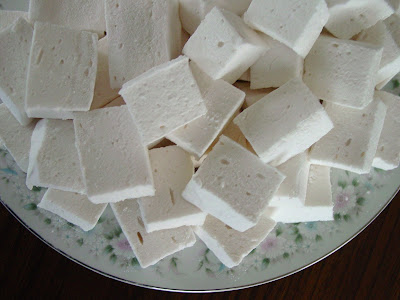 Place the gelatin into the bowl of a stand mixer along with 1/2 cup of the water. Have the whisk attachment standing by.

In a small saucepan combine the remaining 1/2 cup water, granulated sugar, corn syrup and salt. Place over medium high heat, cover and allow to cook for 3 to 4 minutes. Uncover, clip a candy thermometer onto the side of the pan and continue to cook until the mixture reaches 240 degrees F, approximately 7 to 8 minutes. Once the mixture reaches this temperature, immediately remove from the heat.

Turn the mixer on low speed and, while running, slowly pour the sugar syrup down the side of the bowl into the gelatin mixture. Once you have added all of the syrup, increase the speed to high. Continue to whip until the mixture becomes very thick and is lukewarm, approximately 12 to 15 minutes. Add the vanilla during the last minute of whipping. While the mixture is whipping prepare the pans as follows.

Combine the powdered sugar and cornstarch in a small bowl. Lightly spray a 13 by 9-inch metal baking pan with nonstick cooking spray. Add the sugar and cornstarch mixture and move around to completely coat the bottom and sides of the pan. Return the remaining mixture to the bowl for later use.

When ready, pour the mixture into the prepared pan, using a lightly oiled spatula for spreading evenly into the pan. Dust the top with enough of the remaining sugar and cornstarch mixture to lightly cover. Reserve the rest for later. Allow the marshmallows to sit uncovered for at least 4 hours and up to overnight.

Turn the marshmallows out onto a cutting board (I used a piece of parchment) and cut into 1-inch squares using a pizza wheel dusted with the powdered sugar mixture. Once cut, lightly dust all sides of each marshmallow with the remaining mixture, using additional if necessary. Store in an airtight container for up to 3 weeks. 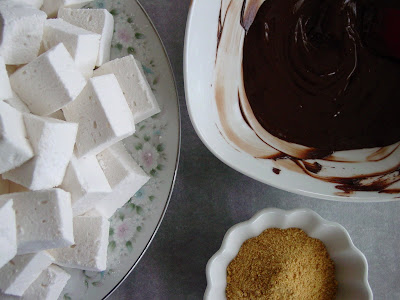 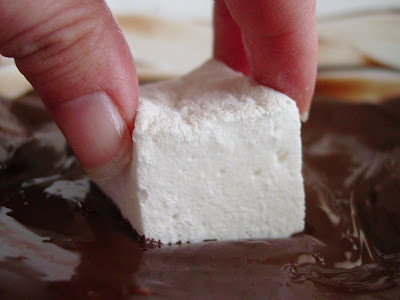 For the S'more marshmallows: Dip the bottom of a marshmallows into melted dark chocolate, them dip into crushed graham crackers. Place on a sheet of wax paper or parchment til chocolate hardens. 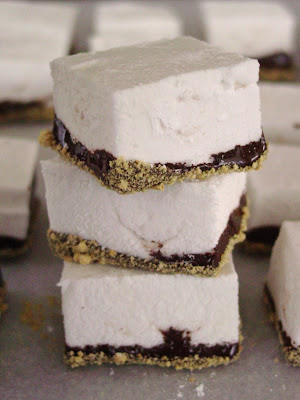 Please stop by Ingrid's and Michelle's to see their marshmallows!
Recipe Made by Monica H at 1:12 AM

What a fun idea to create your own little baking group with your friends. I love it. Your marshmallows look perfect I love the idea of coating them in dark chocolate. Now you have the basics you can experiment with those cinnamon ones ;)

What beautiful marshmallows!! I wish I could be a part of your little group; that is too cute!! I love the way homemade marshmallows look. The photo of the gelatin packet looks so fantastic for some reason. That one got to me haha. I'm weird like that.

Okay Monica...I soooo want to learn how to make these!
Going to pop back over here tomorrow with my notebook!!!
Do pop over to BLooming on Bainbridge...
I posted my Mom's Famous Fudge recipe...DIVINE!!!
xxooxx

Those look so good! I would weigh like 500 pounds if I lived anywhere near you!

I love the idea of a baking group project, I'd love to join in. The marshmallows look SUPER yummmmmy!! I wonder if they would work for gourmet krispie treats.

You always make things look so easy, but after ghostbusters and marshmallow man I am scared of them.

These look sooo good.I had better not show this to my Hubby,he loves marshmallows.
Blessings,Ruth

These are on my grandma list of things to do with GRANDsons this summer, thanks for sharing!
joycee at grannymountain

How pretty! I just commented to Ingrid that I made cinnamon marshmallows last week ~ I love the idea of the smores, though! YUMMM!!

Mmmmm, pinwheels! Very clever, Monica. For at least two years I keep meaning to make marshmallows. I saw Ina make toasted coconut marshmallows, which looked great. Dipped in chocolate is excellent!
What a fun group you have going. Too bad I'm so overbooked with projects that I can't horn in on the fun. I'll just watch from the background and cheer you Bakers on!

Smores marshmallows is a fabulous idea!! They look amazing.

They look so good. Thank you for sharing the recipe.

I seriously didn't know you can make homemade marshmallows. It would be so cute to make some up in different shapes.

I've always wanted to make marshmallows. I've heard people say they are so much work it isn't worth it, so I'm glad your opinion is different. I think you should give these as gifts for the holidays. It would be inexpensive, but anyone would think they had gotten such a great treat!

Everything you make turns out beautiful and these were no different. Love the smores flavor!

Cant wait to see what you guys are baking up next! I still want to try the pretzels!

OMG, these look heavenly! I've never had homemade marshmallows, but I know if I made them I could just eat them straight up! Do they stay fresh for long, or would I have to eat them all in one weekend?

I just recently made this exact recipe. How funny! I did not get mine to smooth out on top as well as you did. But, they tasted amazing, just the same.

I have just found your blog and Im lovin it :) Yayy.. great pictures too, Carm

I have this recipe in my To Make notebook but haven't gotten around to it yet. It's now going to the top of the list! :D Gorgeous marshmallows.

So fun to make something completely new. I would never even THINK to make marshmallows! Mmmm.

keeley, I'm not sure if they'll keep that long because we ate them. I made them Friday and I have a few left but they tastethe way they did on day 1. The only thing i would suggest is to keep them in a container of a bag with enough air to circulate around the marshmallows so they don't stick to eachother. Also an extra sprinkling of the cornstarch/powdered sugar mixture would help keep them from sticking as well. I hope you'll make them!

Hubba, hubba-those look awesome. Now I want those, a large Hershey bar and a sleeve of graham crackers. Of course, our fire pit has about 4 feet of snow covering it....maybe the gas range will work just as well!

It has been a while since I made a batch of marshmallows - I think I may need to get the gelatin out and start a batch! To anyone who hasn't tried this, they are really easy to make and they taste SO much better than any store-bought marshmallow.

Wow, now this is what a true cook/baker is all about! Making one's own marshmallows. You're simply amazing! I need to check out your new blog too! Bye for now, Roz

These are dangerous. I have a serious marshmallow problem. I will miss reading your blog after I slip into a diabetic coma.

Ohhh...what beautiful photos and fluffy little treasures you three have come up with. Next time, would someone try toasted coconut marshmellows and let me (us ) know how they turn out? I'd love to try my hand at making some. I have a grandson who suddenly is 'nuts' about marshmellows. Wouldn't that be a fun gift to make for a 3 yr old?

Oh, my, goodness, those look so fabulous. Smores is one of my favorite treats. I can't wait to try these. I saw Martha Stewart make these one time and have always wanted to since. Now you have inspired me to do it! Now I just need to dig up some gelatin! Thanks for sharing.

Homemade mallows are the best! Love how you jazzed them up!

I've enjoyed reading all of these marshmallow posts. You did some creative things with marshmallows and I like your smores idea. So cute!

How very smorish of you. Delicious!

They look awesome!
We make marshmallows and fudge like chocolate squares on sticks for "hot chocolate on sticks" (teachers, school staff and classmates love thsi treat at holidays) but I have never dipped them great idea!!
Thanks!

Marshmallows are my favorite! I could eat an entire pan of them, and these look so yummy dipped in chocolate. I think I might be whipping up a batch of homemade marshamllows this afternoon:)