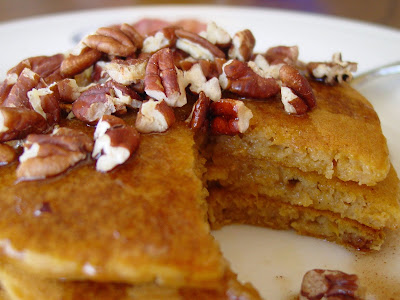 Pancakes. PANCAKES! I have pancakes- two ways, for you today. A stove top version and one you bake in the oven. Both are delicious and simple, but equally different and would be perfect for guests or family on Christmas morning. 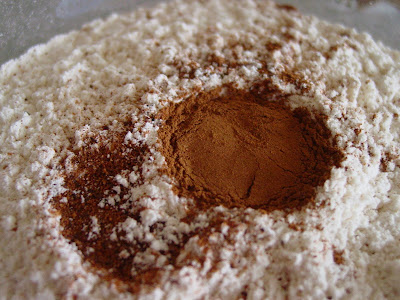 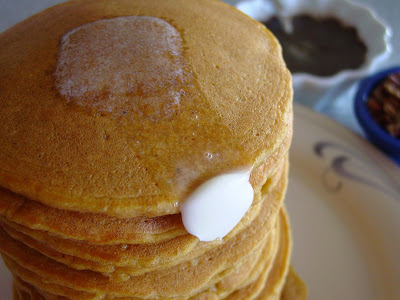 Up first are Sweet Potato Pancakes from Girl Gone Gourmet. I think I found them through FoodBuzz and they looked and sounded so good so I made them right away. They were SO moist. I know that's a weird adjective to describe pancakes, but they were. They weren't light, but they weren't dense either. They just had a really wonderful texture and the flavor of the sweet potatoes really came through. 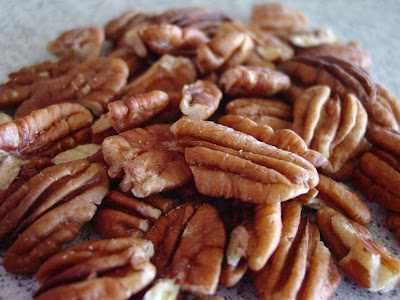 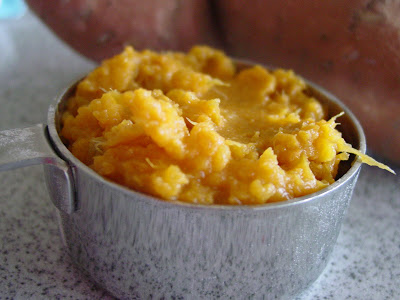 The original recipe called for 1 1/4 cups of sweet potato but I only had 1 cup and it called for the toasted pecans to be in the pancakes, but I don't like nuts IN things, I prefer them ON them so that's what I did. I toasted them and served them with buttery cinnamon syrup on a stack of warm pancakes. Delish! 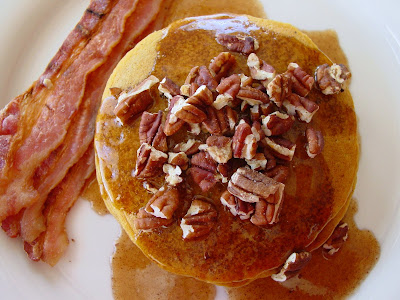 Heat a skillet or griddle over medium heat. Using a 1/4 cup measuring cup to scoop the batter into the pan. Cook until both sides are golden brown. Serve with butter, warm cinnamon syrup and toasted nuts. 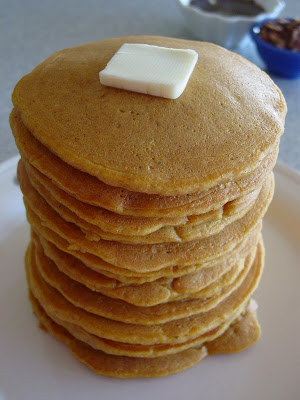 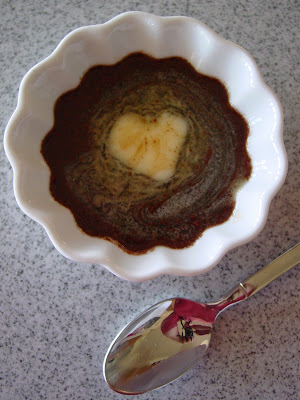 In a small bowl or measuring cup, heat syrup in the microwave. Add cinnamon, stir til fully combined. Add butter and allow to melt. Stir. Serve. 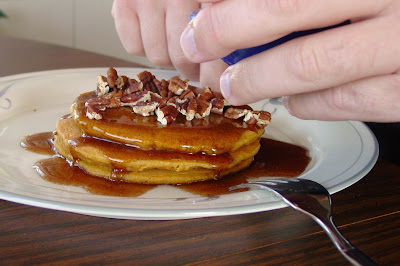 The next recipe is for Baked Pancakes. I saw this recipe from Donna at My Tasty Treasures and she got the recipe from Big Red Kitchen. This recipe makes an 8x8-inch dish of pancakes, but I halved it and made it into a smaller Pyrex dish. I'm sure you could even double and bake it into a 9x13- just adjust the baking time as necessary.

Taste just like pancakes- they were light and fluffy without all the trouble of standing at the stovetop. I added blueberries to mine but because the pancakes bake up taller than the traditional pancake, they stayed on the bottom of the pan. No worries, it didn't affect the taste at all. Yummy, simple and great for crowds.

Baked Pancakes from MTT via BRK

Preheat oven to 350°. Lightly grease an 8x8 baking dish. In a large mixing bowl, beat together milk, butter and egg. Add sugar, then gradually beat the flour in. Carefully stir in the baking powder and salt. Pour batter into prepared pan. Bake for 20-25 minutes. Serves 4-6.

And my sleepy girl cuddled up with her reindeer.

Come back tomorrow for another breakfast idea. Please come back- I need the encouragement!

Love them both! Gonna have to try that oven version...looks so good :)

Those pancakes look absolutely spectacular. And way out of my league. I'll be whipping out the Batter Blaster and letting the kids have it themselves. :) Merry...

The only oven ones I have seen is the German Pancakes..we called them Monster Pancakes! : )
Your oven ones look good and the dog and his little deer...too cute! Come say hi :D

The baked pancakes and cinnamon syrup look so tempting. O-M-G!!! I must bookmark this post. Thank you!

Love the look of the sweet potato pancakes and the cinnamon syrup and nuts make it divine! Never seen or heard of oven baked pancakes before, look very light and fluffy. Can't wait to see whats on the menu tomorrow.

I love your breakfast idea, Monica. I'll be back.Merry Christmas!

Sweet potato pancakes .. reign supreme Moniva, they look heavenly. You are right the baked pancakes perfect for a crowd.:)Thanks for the shout.

Can I come over for breakfast? LOL That giant stack of pancakes is just gorgeous and the syrup throws it outta the park. And the butter heart? Monica, you're something else, my friend. It's so pretty!

your dog snuggling with his little reindeer is too cute!
I have never heard of a baked pancake, so now that I see what it is it looks really good!

Lick the bowl good? Try I WANT TO LICK MY SCREEN GOOD. Yummy! I can't wait to try the baked pancake, Monica!

Thanks for your great posts at this very busy time of year...I am enjoying them very much. The baked pancake fascinates me..what a great idea. As the chief cook, by the time all the pancakes are done at my house, everyone is done by the time I sit down so this is a fun way for everyone to be able to eat together..ha with ME..it is all about ME...

I have just found your blog and it has become a "must read" or a "must eat" for me! I LOVE the pictures and wonderful recipes you share! THANK YOU!

Love the oven version - perfect for when our huge family is all together!!! I must say that my MIL and I have our assembly line down to a science, but this sure would make our job much easier! Thanks for sharing :O)

Could not wait to get here this morning!

First, the pancakes (both) look so good I can almost taste them! Second, the melting butter pat in your bowl looks like the heart I know you use to cook and bake, which is Perfection! And lastly, your sweet girl and her reindeer is too precious for words!

You had me at Sweet Potato! I have a couple pounds of sweet potatoes sitting on my counter, just waiting to be used in something yummy. We will be feasting on Sweet Potato pancakes for breakfast on Christmas morning. Can't wait to taste that cinnamony syrup.

Yum both look delicious! But I love that baked ones so you can get other things prepared while those are baking up!

I love all of your breakfast ideas! What time should I arrive for Christmas breakfast :) haha

ok girl that pic of your dog is precious. I know I'm supposed to comment on the food, but she's just too cute and has to take up all this post. :-)

I am like you I prefer the nuts on top, they look wonderful. We tried the baked pancake a few weeks ago, the kiddos loved it. I am loving the breakfast ideas and will be back tomorrow! :)

While I thought baked blintzes were brilliant, the baked pancakes are really clever! I can already see myself pulling out frozen olallieberries and making this for my sweetie. Thanks Monica (and Donna) for another great breakfast idea. Whoo-hoo!

OH! And I forgot to say that Autumn's photo is just too sweet! That's December page material for a Christmas calendar!

The cinnamon syrup with the butter melting into a heart is just too perfect! Great post.

i loooooove pancakes! we're making gingerbread pancakes tomorrow but i need to try the baked kind sometime. i'm so curious!

GREAT breakfast posts by the way :)

Okay, I was like YUM, I am loving the sweet potato w/ pecans and cinnamon syrup...and then I saw the oven-baked which I've been meaning to make...and I can't make up my mind!!! Perhaps one for Christmas Eve morn and one for Christmas morn....added to the cinnamon rolls I'm already making. LOL!!! Delish :D

How funny, I was coming to see what was on the menu today knowing it was pancakes, per your message :-)

I was going to tell you that as much as I love pancakes they didn't seem like the right Christmas morning breakfast for me because I'm the only cook in the house and don't have a griddle so pancakes is very long and drawn out. I may have to try these oven ones now. Yummy!

Just another reason to get myself over to Texas and your house! Lets just have breakfast and desserts. Oh, wait and your pork tenderloin. That's it.

Your Autumn is too cute with her stuffed Rudolph.
~ingrid

Both versions look devine. I'm with your hubby-I like the maple flavored pancake syrup that I grew up on, but love to use maple syrup in baked goods.

That dog is going to be kidnapped if I ever get to Texas-too darned cute for words!

Both look amazing but I really love that idea of putting them in a pan. Then you can just bake it once and everyone can eat!! YUM!!

That stack of sweet potato pancakes looks soooo good! I betcha I could polish off those babies on a cold Saturday morning. Or at least, I'd like to try.

oh my goodness!! i am so dying to try the cinnamon rolls AND the other recipes, but i love that cc is in the rolls!! i'm all about using dairy in unexpected ways!!

thanks for all your hard work - especially this time of year!!

Love the variation on the sweet potato pancakes!

I used to have a recipe for baked pancakes that my kiddos loved, but it was way too eggy for me. I think yours is going to be just perfect! I'm trying it out for dinner tonight! Thanks!