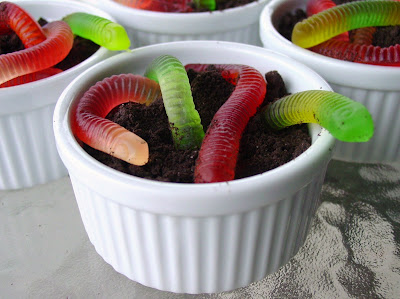 When I was a young child and I used to eat dirt with a neighbor friend. I also used to chew on crayons and paper, but that's a story for a different day :-) We used to make mud pies by compacting dirt from around the big trees in the backyard into a pie plate and then watering them down with the water hose. I don't really know what I was thinking back then but no one ever told me not to do it. Were they good? No, not really. 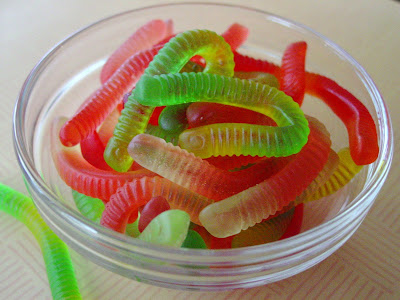 This is a different take on eating dirt that is actually tasty and it's fun for kids to make. In fact my 14 year old brother made these by himself with my supervision of course. He made the pudding while I crushed the cookie crumbs but he assembled them by himself. They're not supposed to be pretty or perfect so just let the kids be kids and get pudding on the side of the cup or spill dirt. There's not a wrong way to do this. 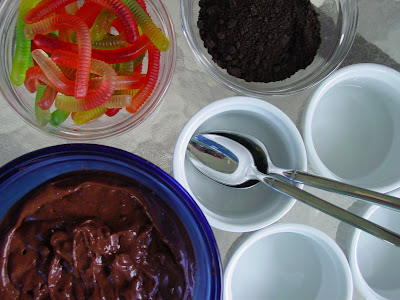 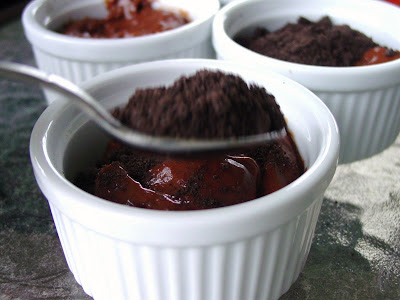 They're fun and they're creepy and they're perfect for kids to make for sleepovers or for parties this Halloween weekend. And the best part is that after you eat the pudding and the chocolaty cookie crumbs dirt you get to slurp on slimy worms! 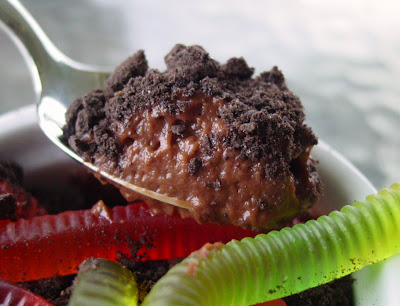 I took this picture and Aaron said "that doesn't look very appetizing Nana". Well isn't that the point? It's dirt and worms! :-)

Layer the pudding into a cup and top with crushed cookie crumbs. Insert gummy worms and eat!

If you don't like chocolate you could easily substitute butterscotch pudding and use graham crackers or gingersnaps cookies crumbs. You can use anything as long as it resembles dirt. 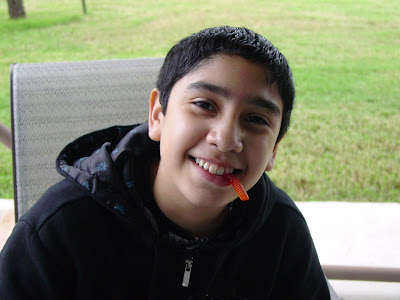 I never ate dirt as a kid (I made my little sister eat it)...sorry sis!! These are SO cute!!!! MUCH cuter than the "cat poop" cookies I just saw on Allrecipes.com (gross!!)

I think I am going to do something similar to this for our Halloween dessert. Yummy :)

My daughters LOVE this! Also, at Halloween time, you can usually find other gummy bugs to use. Some of them even ooze bug goop!!!

I've never made these! They look so fun!

I LOVE how you did them in the little ramekins! They are adorable :)

Gotta admit. I like this w/o the worms anyday. :) I'm totally jealous of your ramekins. I've been wanting some since forever. Hoping I get some for Xmas.

I'm having a card GIVEAWAY on my blog: http://730apron.blogspot.com/ All are welcome!

Your brother is adorable!

The dirt cakes are great kid treats! Love them! Thanks for sharing.

I made this in a (new and clean) sand bucket last Spring for Claudia to take to preschool. We served it with the shovel and everything. The kids loved it.
Have you seen gummy pumpkins? That would be fun too!

oh lord I was one of those freaks that ate glue...yes yes I know. no no not anymore.
love your dirt girl! LOL

Such fun.. Ill say it again.. your bro is lucky to have you! XXOO.

Ew, did you really eat dirt? I was totally one of those prissy girls that didn't like to get dirty. I don't really remember but that's what I was told and I still hate for my hands to be dirty. :)

Yup, this dose look like the perfect recipe for the kids to make. As I sit here and type I'm thinking Babygirl could do this all herself for her classmates with me working on the other desserts!! If she lets them the twins could even help! I'm gonna have to re-think things.

What a great idea for a kids treat. So quick and easy to make. And as someone else mentioned it will make a tasty addition to the Halloween party food.

You have a blog full of fun food and I have really enjoyed reading the different recipes.

These look very fun and you could serve them at a Halloween party. Everyone likes a few worms :)

I love those worms!!! Love how creative you are with the worms and "dirt"

I never ate dirt but the "dirt" you have pictured is delicious...I'll have some of that!

I think as a kid i never ate dirt but after looking at this recipe i may have to "attempt" to eat chocolate dirt. :D

Monica-- This blog is FANTASTIC! I simply cannot believe I've only just discovered it!! Where have I been?? Well, it really is gorgeous and I see so many great recipes I'd love to try. Your photos are stunning as well. Consider me a new fan!

dirt was my all-time favorite dessert growing up!
-Mini Baker

These look really cute! Thanks for sharing :)

I love these, too!! Such kiddo fun going on lately :) Mine happen to be squealing in my ear after seeing these this morning, LOL!!

HAHA I used to do the same thing when I was younger (make mud pies)!! :P

LOL, I have a picture of my hubby with dirt all around his mouth with a big smile on his face when he was about 3. He claims he never ate dirt and was just hamming it up for the picture, but I don't believe him.

I LOVE dirt pie, it was my favorite dessert to make when I was a Girl Scout - yours looks great!

Monica, These treats look so good and so much fun on top! Gosh, I'm glad that I was not the only little girl who made mud pies outside! But I think that I only pretended to eat them. They always looked so good didn't they? Who knew it was the beginning of such a food obsession for some of us foodie bloggers! Love, Roz