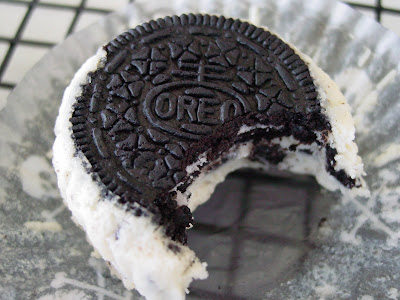 I saw these creamy babies at Bake or Break and I contemplated making them for my birthday because they looked so good. I placed a mental bookmark on them and moved on.

Then on my birthday I was talking to my 11 year old cousin and I decided to make these for him. We have the same birthday and he was asking me about my birthday cake. I told him I made myself a strawberry cheesecake tart and I asked him what kind of cake he got. He said he got a frozen Sara Lee cheesecake and I felt badly for him. He deserved more than that. Every boy on their 11th birthday deserves more than a mediocre frozen grocery store cake. Don't you agree? 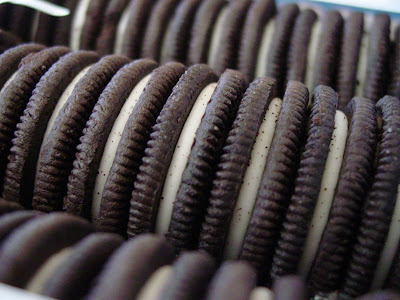 So I vowed to make him these cheesecakes to celebrate his birthday as well as the 4th of July. We all met up at my mom's for a bbq, so it was the perfect occasion to make these. Coincidentally my mom's birthday and my other cousins' birthday are on July 5th, so we had a multi-birthday celebration. Only I made my mom a different cake and some fudge! I'll blog about that later. 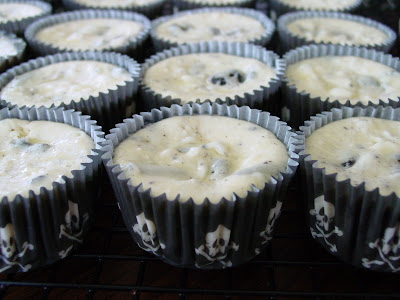 Anyway, for my birthday the lovely Ingrid from 3 B's sent me Martha Stewart's new Cupcake book! I knew she had because she told me she bought it, but I had no idea she was going to send so many other goodies as well. Look at all this loot! Thank you Ingrid for making my birthday so special :-)

One of the things we decided to do was bake together from this book. She happened to bake these same Oreo cheesecakes so head over there to see hers! 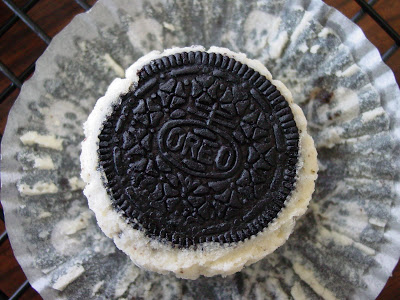 Preheat oven to 275°. Line standard muffin pans with liners. Place 1 whole cookie in the bottom of each liner.

Drizzle in eggs, a bit at a time. Beat in sour cream and salt. Stir in chopped cookies.

Divide batter among pans. Bake for about 22 minutes or until filling is set.

NOTE: Fill them up almost to the very top. They may puff in the oven, but they don't rise. I got 32 cheesecakes from this recipe.

The only problem I had with these cheesecakes is that they puffed in the oven, when I pulled them out and let them cool, they shrunk up a bit. Also when I took them out of the cupcake tin, there was condensation buildup underneath the cheesecakes. Don't know what that was all about, but it didn't affect the flavor or consistency one bit. And one last thing, I refrigerated these over night. The next morning when I went to pipe 'Happy Birthday' on them, they looked wet so I had to blot them. Has anyone else made these yet and had that happen? 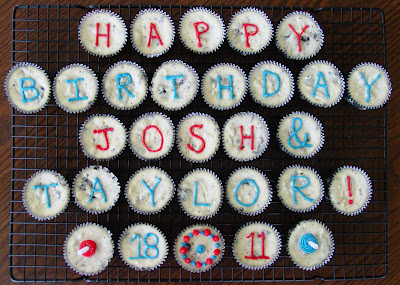 These cheesecakes were SO good. They were easy to put together and since the recipe calls for a whole cookie in the bottom of the cupcake liner, there's no need to make a crust. Easy peasy and ultra creamy! My cousin loved them and he kept asking me what was in them as if he was making a mental note so he could go home and make them- so cute! I promised him I'd send his mom the recipe so she could make them again for him and that made him pretty happy. 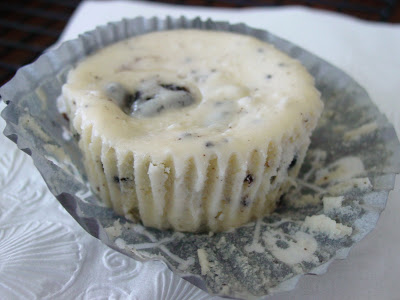 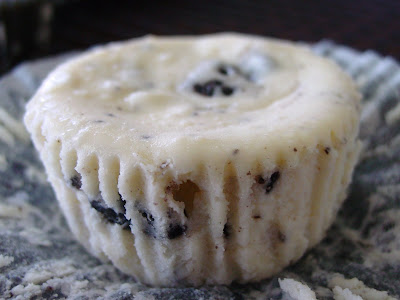 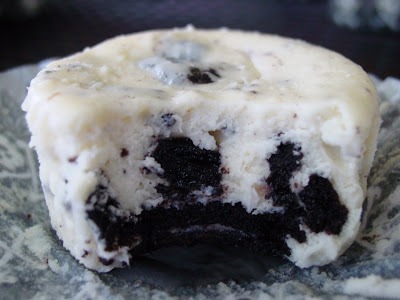 Wow... what a wonderful present you got there! I went through a bit of the Martha Stewart book when I had an interview for a job few weeks ago when I told the interviewer that I like to bake cupcakes :)

What a sweet thing to do for your young cousin...I will be trying your Berry Cobbler Cake recipe today, since I have loads of fresh berries...and the Oreo Cheesecake Cupcakes next week.

Awesome present.. Ingrid is just the very best there is!! These look fabulous! So delicious and so decadent. Your cousin must love you!

Wow those are adorable! How nice of Ingrid to send you all that stuff...so fun!

Ahhhh...I haven't eaten breakfast yet and I pull up your blog..now I'm starving and I am going to run to CVS to get some Oreos for breakfast. :-) Those cupcakes look awesome. Oreos are my favorite cookie ever..can't wait to try this recipe..your pics look amazing too!

I want to make these for our friend. He loves oreos! They look so fun!

Monica, thanks for making MY day! :) Your post is awesome and just as I suspected your photos are stellar! I like the variety of looks. I can see clearly that the muffin size is the way to go. Makes me want one!

Yummy, I have a sister who would love these.

Yummy! Your Cookie and Cream Cheesecake picture reminded me of the total solar eclipse I saw last night. As I was watching it, I kept thinking "what kind of dessert would you make out of that?" (I know, it's borderline baking nerdiness:) )
Well, Monica, I think you nailed it!
Love your blog by the way. Pretty to look at, witty to read. If I could leave drool marks it'd show !

Those cupcake liners with the skulls are too cute. Where can I get some of those?

These are so cute!

The only thing I can't decide is whether or not my co-workers are worthy of such a treat on our next food day at work! I think I'll have to try it out with my close family and friends first. Love your site!

You have such a good heart, Monica! How sweet of you to make an eleven year old boy's birthday special. Anyone would be thrilled to have these made just for them. Hello? Cheesecake and oreos. Be still my heart. My boys would love these.
How sweet of Ingrid to send you such a lovely goodie package. As I recall, you sent me a lovely one such as this. Such a sweet thing to do!
Debby

This really looks incredible. I am just curious as to what type of cake pans you use for your round cakes. They seems very tall also. How many pans do you use to get the height needed. I purchased 3-- 9 inch round aluminum pans today. I normally use 8' but they seam so small. Have a blessed day! Love your blog!

Happy birthday! that's a lot of gifts that you received!!!

You know, i am a sucker for good oreo cheese cake but doesn't know how to make. I might have the courage to try your recipe,it looks yummy!

Yummy! So many awesome recipes here and so little time!!

I love your Blog Monica!!

Love cheesecake and oreo cookies! thanks for sharing the recipe. Great and thoughtful gift from your friend.

They are so cute and I know they taste incredible - yay for Oreos :)

So fun! Definitely better than a store-bought cake. I bet this tastes even better than cookies and cream ice cream.

These look fabulous! And what a nice thing to do for your cousin. He will remember his 11th birthday cheesecake forever!!

These look fantastic! What a lucky boy!

Mmm, these look sumptuous! What a great way to celebrate your family members' birthdays!

They look so cute and delicious, man I miss cheesecake.

Yes! I had condensation underneath and water droplets on top...still tasted good though : )

Anything with Oreo in the title when it comes to baking is sure to be a great hit! This recipe is something I can see becoming a favourite, definitely one to perfect.