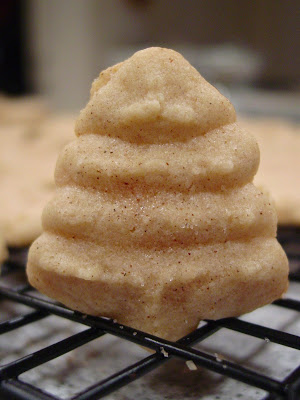 My mom gave me a cookie press for Christmas about 3 years ago. I've never used it til today. I guess I was intimidated by the press, or maybe I convinced myself I didn't like them. I'm not sure, but it remained unopened in the box for a very long time. It's not like it was hidden or put away somewhere I couldn't find it, it was in my kitchen island, next to my lean mean fat reducing grilling machine. I look at it often, but I never had a recipe for Spritz, so there it sat. 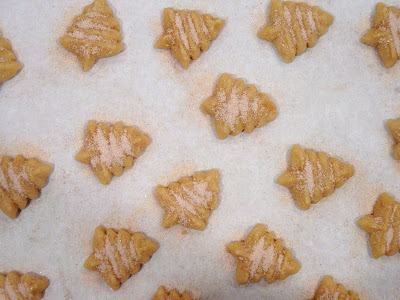 I was browsing through blogs and came across a recipe for Spritz cookies. I bookmarked it. They were really cute, but they didn't have anything in them that seemed overly exciting. They just seemed like pressed sugar cookies, and I already had a recipe for sugar cookies. I googled "spritz" and came across Cinnamon spritz, but there wasn't a recipe. So I thought I'd just adapt the recipe that everyone said was so good by adding a little ground cinnamon, and sprinkling cinnamon sugar over the top- kind of like a snickerdoodle. 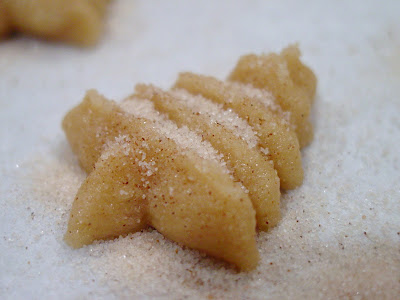 Then, I softened my butter, sifted my flour, sifted the flour again, creamed the butter and sugar, added the vanilla, stirred, added the flour, read the cookie press instructions, loaded the smokin' gun and went to town. The dough seemed really soft, but then again I've never made these before, so what do I know. I pressed, I had fun, I even got Mr. h to press a few trees out. It was a little exciting and I wondered why I had waited so long to use the cookie press. I popped them into the oven and 10 minutes later I had made thin, salty, buttery, tender, unrecognizable trees, or more like blobs. 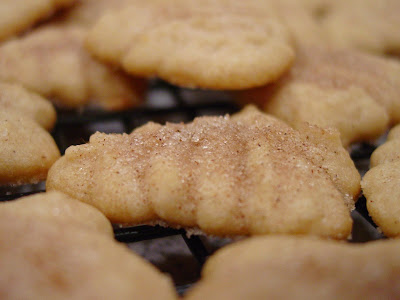 I read the recipe, read it again, then again and then (!) I realized I added way too much butter. I added 3 sticks of butter! Which is twice the amount I needed, but I didn't realize it until I had already baked 2 sheets of cookies :-( I added more flour, more sugar, and more vanilla. I reloaded the gun and it was so stiff, the dough kept oozing out of the gun without me pressing the trigger. I emptied the barrel, added the extra egg yolk I had forgotten, and reloaded. STILL STIFF. I emptied the barrel again, while flinging dough all over the kitchen and myself and cussing up a storm. I added a very tiny amount of milk and reblended the dough. I loaded the gun one more time and the texture was finally perfect. 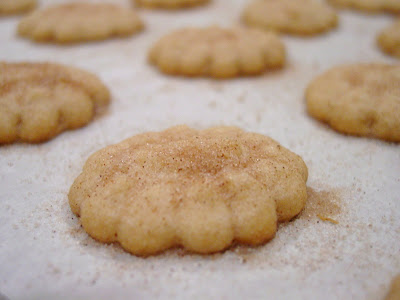 The flavor was great. The texture was tender and buttery and my husband loved them. He kept walking by and stealing the little tree blobs. Now don't be turned off by all my ranting. As long as you follow the recipe closely (unlike I did) and don't double the butter (like I did) they'll be great and hassle free. I hope you don't have to have your husband pick crusted dough out of your hair. Have fun! 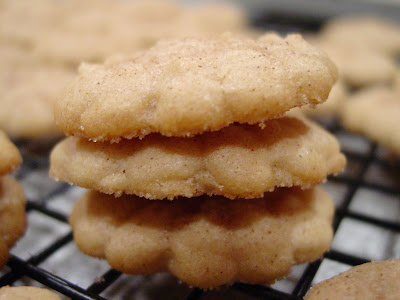 Sift flour into a bowl. Add in the salt and cinnamon and sift again. It is important to sift the flour twice.

Load the dough into the cookie press per the manufacturer’s instructions. Press cookies onto the cookie sheets about 1 ½ inches apart. Decorate the cookies with sprinkles, candies, and other decorations. I sprinkled cinnamon sugar on mine. Bake for 8-10 minutes until golden. Cool cookie sheets on a wire rack. 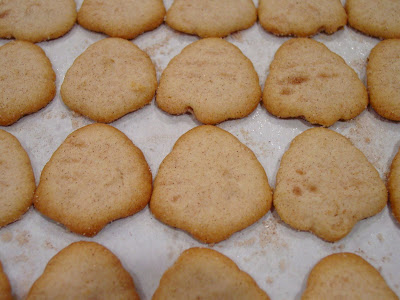 Here are my tree blobs, they kinda look like arrowheads! 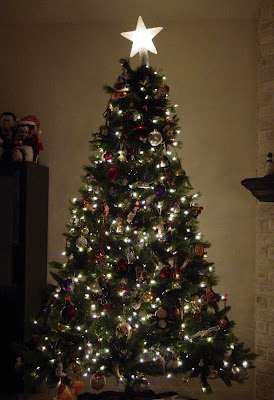 I'm sorry that they were a pain to make. I got a cookie press as a wedding shower gift, it's been sitting unopened for about 6 years. I keep meaning to use it, but haven't yet.

they looked ok to me? am I not a good judge? LOL
wel, how did they taste? that's what matters most.
merry christmas!

Well I googled cookie press recipes and was thinking of using mine but after I read this I do not think I will, lol.

This recipe looks very promising. I was looking around your blog for a recipe with egg yolks then I found this one. I happen to have a cookie press that I don't use very often b/c it's a pain to wait for the cookies to stick to the sheet if the dough is too stiff, but after reading your post and this recipe, I can't wait to take out the press and use it again, even though these cookies are probably for Christmas time. Thank you.

Have you ever made these with a sugar substitute? Just curious of the consistency. Looks great!

Mrs. Scruggs- No I have not tried them using a sugar substitute. I only bake using real sugar so I don't know how they would turn out. But if you try them, please come back here and let me know how they turn out!

Sometimes my cookie press is a pain, but for the most part, I love it. Everyone loves the cookies. They are the perfect size. Your recipe sounds wonderful. I want to try your snickerdoole blondie recipe too.

I am always fascinated by the new spin on a classic cookie. Is it safe for us to call this a Spritzerdoodle?

Made these this morning and found the dough was very dry and crumbly so added some water. The cookies pressed out alright and tasted very good!

I would like to recommend that you use your press on an ungreased and unlined cookie sheet. I have tried using parchment but the dough won't stick to it and keep its shape. Don't worry, with the butter based dough, they won't stick to the sheet.

Thanks for sharing the recipe!