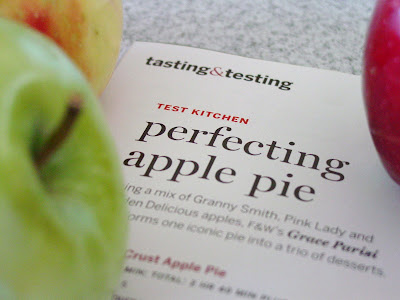 My husband LOVES apple pie. I like it, but if I had my choice I'd choose a different fruit or something with chocolate! When we go to lunch at our favorite burger joint, we sometimes get fried pies. He gets apple and I get cherry. 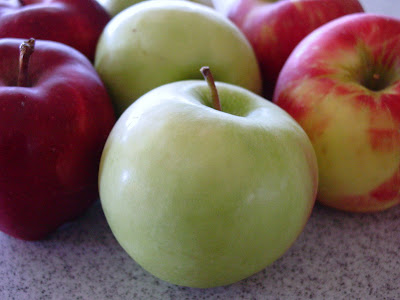 Because I don't love it as much as he does I don't make apple pie. And because his mother doesn't like it, she doesn't make it for him either. So my poor husband has to resort to eating these. They're not half bad, but they don't compare to homemade pie and you don't get that cinnamony-apple aroma that travels throughout your house. 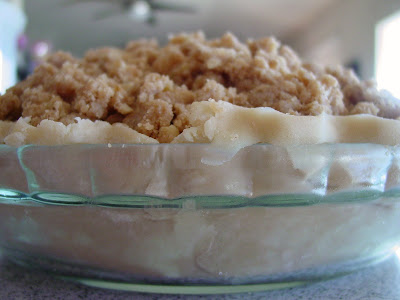 So today, I made apple pie. The recipe I chose came from Food&Wine magazine. I was looking through an article titled 'Perfecting Apple Pie' and it had one basic recipe plus 3 different variations. I opted for the Dutch apple version, because I like the crunchy, nutty topping and because I only had one pie crust in the freezer leftover from when I made this pie. Preheat the oven to 375°. Set a baking sheet on the bottom rack. In a bowl, toss the apples, lemon juice, sugar, 1/4 cup of the flour and the cinnamon.

On a floured surface, roll a disk of the dough to a 13-inch round; fit it into a deep 10-inch glass pie plate and brush the overhang with water. Crimp the overhang. Spoon in the apples.

In a bowl, whisk the remaining 1 cup of flour, the light brown sugar, the baking soda and the remaining 1/4 teaspoon of salt. Add the 6 tablespoons of softened butter and rub the mixture until sandy. Add the chopped walnuts. Press the mixture into clumps and sprinkle over the pie.

Bake the pie in the center of the oven for 1 hour and 10 minutes, until the crust is golden. Cover the edge of the pie if it begins to darken. Let the pie cool for at least 4 hours before serving. 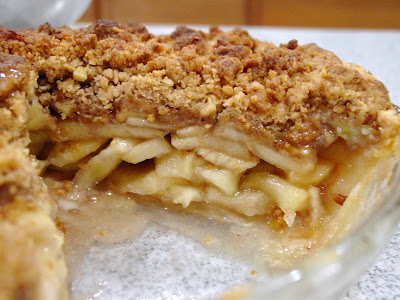 I also added a teaspoon of cinnamon to the crumb topping.

After cooling the minimum 4 hours, we cut into this pie. It was a tad watery for my liking. I thought maybe I didn't add enough flour or I left out an ingredient, but I re-read the recipe twice and from the looks of the pie on their website, this is how it is supposed to be. In the future, I might add a little cornstarch or more flour for a thicker filling. 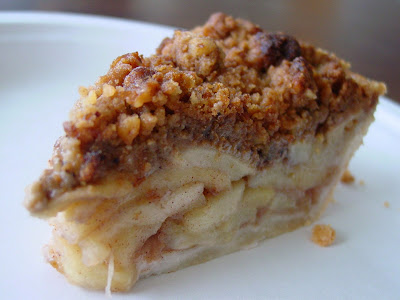 Other variations of this pie:

Oh, I love Dutch Apple pie! Yours looks fantastic!!! I love the topping sooo much better than a top crust.

I ADORE apple pie! It is also my favorite. I'll have to give this recipe a try!

Food Librarian- I love the topping too. So good!

Hennifer- My husband loved it. He sais it was the best apple pie he's ever tasted. I don't know if I would go that far, but it was good. Next time, I think I'll add a bit more flour (about 2 tbsp.) to the filling and I'll try it with a double crust sprinkled with coarse sugar...mmm!