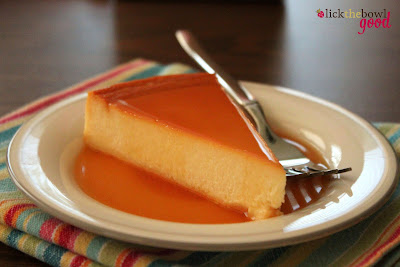 Last Tuesday I had dinner at a friend's house and brought this coconut milk-cream cheese flan over for dessert. The very next day I had to do my glucose test at my OB's office to check for gestational diabetes. If you've never had to have a glucose test, consider yourself lucky. It involves drinking a sickly sweet orange beverage, that tastes like a cross between flat orange soda and orange Gatorade, then you wait an hour and they take your blood. A couple days later I found out that I failed my test by 2 lousy points! You have to score a 135 or lower and I scored a 137. I'm putting the blame on this sweet sticky flan :-) 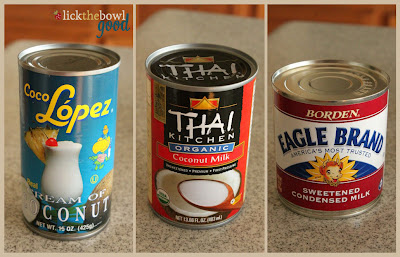 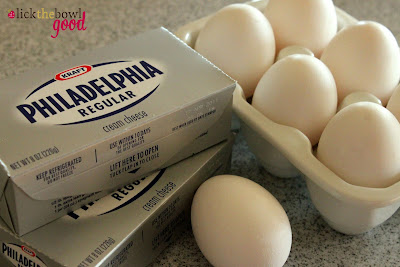 Because I failed the first glucose test, I had to do do another test this morning, only it took close to 4 hours to complete and they took my blood 4 separate times, every hour on the hour. I had to do the test while fasting and was starving since I hadn't eaten in 15 hours. NOTE: Don't deprive a pregnant women of food and beverage. It's not pretty. After that I had to go to my OB to get a shot, so I was poked 5 times within a matter of hours. But it's over now, I survived and I got a delicious lunch afterwards and a long nap after that. If it sounds like I'm complaining, I am. hee hee! But I'm entitled to that every once in a while. 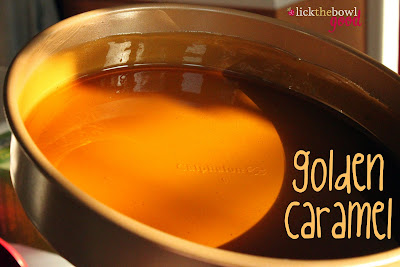 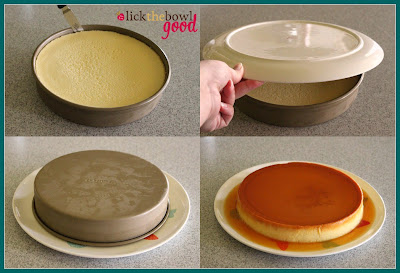 So, onto this flan. It's made with coconut milk and cream of coconut, but surprisingly didn't taste at all like coconut, just caramel. It also has cream cheese in it that makes it extra creamy and firm. The end product was more like a cheesecake with a baked caramel sticky syrup on top- cheesecake in texture, and flan in taste. I thought it was good, but not at all what I was expecting. My older brother is a flan lover- he'll go to a restaurant and order 3-4 servings for dessert. I saved a big hunk of this for him and while he ate it and seemed to like it, the first thing he said was "this tastes like cheesecake". So decide for yourself if you want to make this, but don't eat it before you go in for a glucose test. 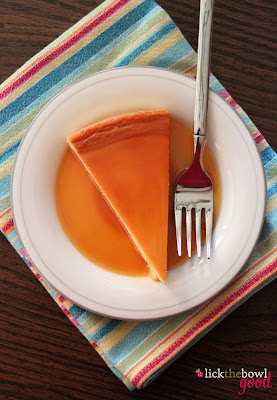 To make the caramel: Combine the sugar, water, and lemon juice in a large, heavy-bottomed saucepan over medium heat. Cook, gently swirling the pan occasionally, until the sugar dissolves and starts to turn color. Increase the heat to high and boil until the syrup turns to a deep amber color, 3 to 5 minutes. If the mixture gets too brown it will start to smoke and smell burned and the caramel will be ruined, forcing you to discard the mess and start again. Once you begin making the caramel, do not leave the pot! Caramel can go from perfection to disaster in just seconds.

Immediately pour the caramel into a 9-inch cake pan, swirl to completely coat the bottom and halfway up the sides of the pan, and set aside. WARNING: Caramel will be extremely HOT. Thus it will cause the pan to become very hot as well. If necessary use an oven mitt so you don't burn yourself.

To make the custard: In a blender or food processor, combine all the custard ingredients (except the boiling water) and blend or pulse at low speed just until smooth and combined. Strain the custard through a fine-mesh sieve into the caramel-lined pan. (Not all of my custard fit into the cake pan. My pan was completely full to the top and had to bake a smaller ramekin of the custard separately).

Position the rack in the middle of the oven and preheat to 300°F. Place the cake pan in a larger roasting pan and place the roasting pan on the oven rack. Pour boiling water into the roasting pan until it reaches halfway up the sides of the cake pan. Cover the roasting pan with aluminum foil, piercing the foil in several places to allow steam to escape. Bake until the flan is firm to the touch in the center and doesn't jiggle when the pan is moved, 50 to 60 minutes. (Mine took 1 hour and 30 minutes to cook all the way through).

Transfer the flan from the water bath to a wire rack and let cool. When completely cool, cover with plastic wrap and refrigerate until very cold, preferably overnight.

To unmold: Run a table knife carefully around the edges of the pan, pressing it against the side of the pan to loosen the flan but avoiding cutting into the custard. Hold a serving platter (one large enough to hold the lovely, golden sauce) over the top of the flan and invert. Shake the pan gently to release the custard. Remove the pan and let the caramel sauce flow around the sides of the flan and pool around the edges of the serving plate. Serve immediately. 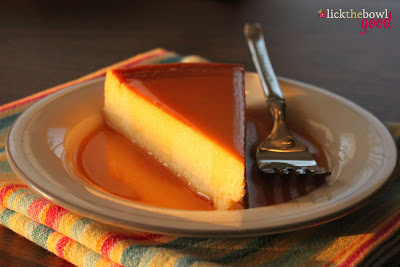 This sounds so amazing! Great recipe. I'm excited to try!

:D this is like a giant crème caramel, amazing.
good luck with your pregnancy xx

Maybe I can blame my thunder thighs on this one flan too after I make it!

oh no! poor baby! how are you? sounds like its all going well. i would be afraid to make this unless i knew it was leaving the hosue after my 3 taste-test bites.

Hey, if you're going to fail, you might as well fail for something as delicious as that flan! I'm drooling over here. I was fortunate enough not to have to do the three-hour test, but I can still taste that glucola on my tongue. YUCK.

I'm so glad I never did the big test (and with babies two and three didn't do any test) because I HATED the first one. I was not a happy/pleasant/human person to be around as the hour would to a close. Gratefully my certified nurse midwife was not concerned at all and my number 141...I guess they all have different cutoffs. And I'm glad I don't do the the anymore with my pregnancies!

And this sounds great!

Oh, ick to all the needles! A nice lunch and nap after all that is well-deserved.

The flan looks gorgeous, and I'm certain it would happily take the blame for those lousy points.

I hate needles, but having 5 poked into me within hours, someone will pay if it were me, haha.

Yourn cheesecake-flan looks good. I've never had flan before, so I'm interested to try it.

Stunning photos, as always. It was still good! :-)

Looks delicious. During my first pregnancy I didnt mind drinking the glucose juice. But the second time around I was so sick and seriously though I was going to throw up in the drs office while drinking it.

The flan looks gorgeous and I love the sound of the texture. I'm not a fan of the wobbly jelly like flans, so this cheesecakey one sounds yummy.

I know how you feel about being pricked so many times. At uni we studied glucose levels and I ended up as the test subject and had all 10 of my fingers pricked in a matter of hours-Ouch. Hope your results are better this time

Everything looks so delicious! I enjoy reading your blog and looking at all the photos. I'm sharing this with my brother the chef and Kasia a friend on fb. She lives in the UK. I'm going to send you a link. It would be great if you two were to connect. You are sooooooo funny! " Don't denie a pregnant woman food, it's not pretty". LOL

Everything looks so good! and i started the south beach diet yesterday to get over me cake cravings. so you can imagine how much im dying!

Beautiful pictures -- it looks divine.My husband loves flan but he might feel just like your brother. I think I would love it!

I failed a glucose test with my second son and they didn't give me a do-over. :-( I just had to eat on a low-glucose (same as diabetic) diet for the rest of my pregnancy. Big pouty face on that!

Being a new diabetic, I get exactly what you had to go through. It sucks. You hit my biggest weakness of all. Caramel. It makes me swoon. Add flan to the equation, and I'm in-love. Sorry the dessert didn't quite deliver the wow factor you had hoped for, but I'm betting it was still really delicious. It's getting closer! xoxo

Ugh, sorry you had to deal with that testing, I grumble when I have to fast just overnight for my annual routine bloodwork, and that's only 8 hours!

I hope the pregnancy is going well, besides all the testing :( But that flan looks delish! I don't think I've ever had flan, but yours looks tasty and anything with caramel is a winner in my eyes! I wanted to let you know about my cookbook giveaway that is going on right now until July 16th. Stop on by to enter! Hope you are having a great week :)

So sorry about your glucose test! You are entitled to some complaining! Your flan looks amazing. I especially like the sunset kissed flan picture :)

I am going for my glucose test in a few weeks, I have done it before but I am not looking forward to it. Maranda told me about your flan, I love it so much and is my husband favorite, I even had a blog post about it.
Good luck in your test.

lol, I failed by one point!

Funny story though. By the end of the four hour test, the blood taker (whatever they are called) asked me (who is OBVIOUSLY pregnant, what I am having. I was so starving by then that I just said the first thing that came in my mind..."I think I'm going to Chick-Fil-A, Why does that matter?" The poor girl just had the shocked look on her face until it registered in my head ... OHHHH you meant boy or girl...I'm having a boy. I was so embarrassed!

OMG! What a delicious looking flan! It's make me hungry :)

Yuck those glucose test are nasty! Only 2 points so I blame this dessert too :) I don't super like flan but if it taste like cheesecake then I am in! hahaha and I love coconut milk and am always looking to use it in new ways. I will have to try this one with it's carmel goodness.

I've had both of those glucose tests done while pregnant... you described them perfectly. Such a pain.

This looks sooooo good... I'm going to pin it on my pinterest board.