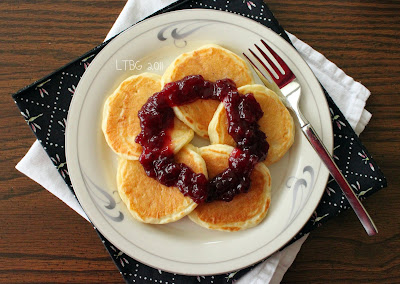 These are the Mother's Day pancakes I promised you. Yes, I'm a week late, but you can save this recipe for next year. Or for brunch this weekend, or a special birthday breakfast or just because. Just be sure to make them because they really are delicious and they're a twist on the typical pancake. They're not big and heavy, they're light and mini (which means you can have more) and go perfectly with the tart lingonberries on top. 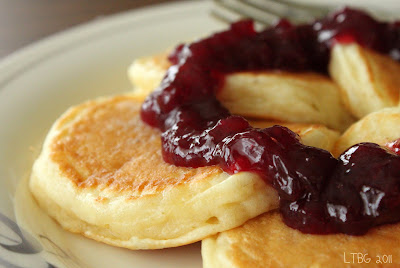 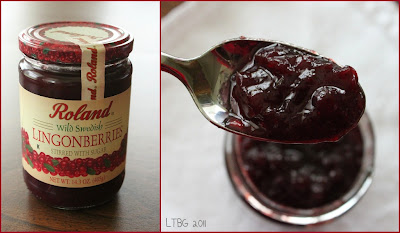 If you've never had lingonberries, they're similar to a cranberry but not quite as tart and just the slightest bit bitter. They're also smaller berries and usually come sweetened and jarred like preserves. I've purchased them from IKEA as well the local grocery store in the canned fruit aisle at the top of the shelf, near the canned cherries. Now I've eaten Swedish Pancakes from IHOP before and they're served with lingonberry jam and butter, in a crepe style pancake but these are a little different. I got the recipe from a NordicWare silver dollar pan, I purchased a while back. The pan was a little difficult to use but it was a good recipe, so I decided to follow through with the same concept and just make them on a non-stick griddle. 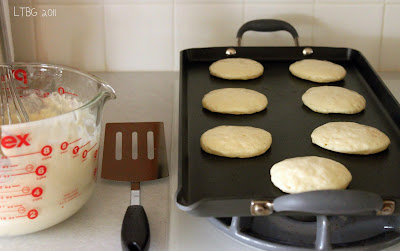 I made these to resemble the pancakes we ate in San Francisco last November. The ones we ordered at Sears Fine Food were much thinner and came a whopping 18 (!) pancakes per order. Granted they were very thin and mine are thicker but they still have that same appeal and tanginess thanks to the buttermilk. Mr. H gladly had 2 helpings and said "mmm, those were good". Then had them again the very next day. I'd call that a success. Now that I think of it, these would be great for Father's Day breakfast too. Just be sure to leave the pink flowers and lace napkin off the breakfast-in-bed tray, unless that's his thing :-) 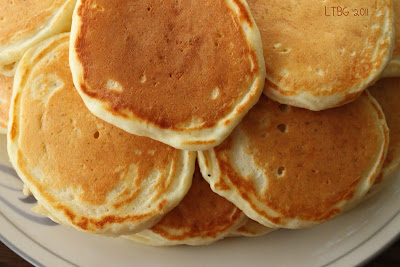 Stir together dry ingredients. Beat egg until lighter in color and slightly foamy, then stir into dry mixture, along with buttermilk and butter. Mix until just blended, but do not over mix or you'll have tough pancakes. It's okay if there are a few small lumps.

Spoon 2 Tbsp. of batter onto a lightly buttered (or nonstick) griddle. Once edges are slightly dry, flip pancakes over til golden. Serve with fruit, syrup or lingonberry jam. 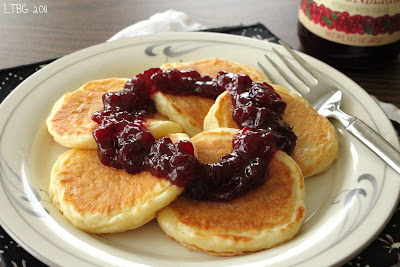 Lovely presentation - looks like a flower. I hope you're doing well.

Those might be the best looking pancakes I've ever seen. I'll have to try them out this weekend!

I have been craving pancakes (well all breakfast foods) lately. I am adding these to my ever growing list of recipes I want to try.

I almost stopped being your friend when you made the comment about the lace LOL, but you redeemed yourself with the last line even though there still lingers an assumption that all women like lace and flowers hehe. I still love you, though. Gotta love me! LOL!!

Anyway, those pancakes look amazingly fluffy. OMG!! Wow. They look even better than the other pancakes you made, and they were good and looked good. Happy belated Mother's Day to you and your mother. :D :D

Beautiful pancakes! They looks so light and fluffy. I love that lingonberry stuff from Ikea...need to get some more soon!

They look yummy. I love pancakes for breakfast it always feels like such a treat. That jam looks gorgeous too and full of fruit.

I bet they are delicious! We just have to look at them, we don't have to wait to make those delicious pancakes, we can make them whenever we want, they are perfect for breakfast, brunch or tea time!! Why not??

Monica those pancakes look delicious. I am going to definitely try making them. I also LOVE lingonberries. I always order the Swedish pancakes (crepes) at IHOP and love their lingonberry butter too!!!!

I remember you going for pancakes -- SO wish I'd popped over and tried them during the trip! There was so much food and so little time!! These look scrumptious.

These look like great pancakes. And mini makes them even cuter! I never would have tried that berry on them, but it sounds like a great treat!

I have been to SF several times now and never had pancakes at Sears yet. This time the restaurant was almost right across the street!!!

These look delicious and I will be adding them to my list of things to make. Thanks for the recipe.

what a delicious plate of pancakes!!

Yum! I've had lingonberries before. I hope I can find some of that jam in my grocery store because I live an hour from Ikea. Worst-case scenario, I'll use whole cranberry sauce.

Wow your pancakes look incredible! I can't wait to try them. I think your presentation is even prettier than Sears Fine Foods! Btw, I ate there the morning of day 2 of the Foodbuzz festival as well. I am still bummed we never met there. Maybe this fall...

Mmm these look so fabulous!

So cute! I am all for all kinds of pancakes, especially when they have buttermilk...and lingonberries. I've had lingonberry soda but I've never actually tried them in a jam/preserve. Though I am usually a fan of jam on pancakes. I just roll them up like a tortilla, with jam and butter in the middle :).

Yum. I love pancakes, but I really like them best for dinner!

Delicious looking mini pancakes! I finally got to visit an IKEA recently and so badly wanted to get a jar of lingonberries, but I knew they would not fit in my luggage and I also knew that they would be confiscated it I tried to carry them on. I'll have to try these soon but with a substitute topping.

Goodness you make beautiful food Monica! EVERYTHING you make no matter how simple (such as these pancakes) or fancy the food you make is just beautiful! I can seriously sense all the care and happiness you put into the magic you do in your kitchen. :-)

These look soooo yummy and your photos are wonderful as always, they make the things you make look all the more delicious!!

Awwwwwwwwwww. "We" had those on Day
#1. They were good, weren't they? You saved me the work of trying to figure out how to make them. I love lingonberry jam, and I have a jar in my pantry. What great memories I have of San Francisco, and meeting both you and Mr. H. xoxo

Hubby LOVES pancakes of all kinds, these look delicious, think I'll try them this weekend, thank you for sharing.

These look so light and fluffy. Just beautiful!

I love baby pancakes! These look so perfect!

I was so happy to see this recipe - 'cause I'm Swedish! (: I had no idea that Swedish pancakes were known outside of Sweden. I was also happy to see that you use lingonberry jam. In Sweden we don't eat pancakes for breakfast though, we eat them for lunch or dinner with different jams (lingonberry, blueberry, strawberry..) and whipped cream. They're a bit flatter than the ones pictured here, just like you wrote (like this: http://carkan.blogg.se/images/2010/mnip_71805895.jpg). Sometimes we make them even flatter and bigger like the french crêpe (like this: http://tinkerbella.blogg.se/images/2010/pannkakor_72288150.jpg). Yummy! (:

Those look good - but they are not "Swedish" pancakes at all! THose are American pancakes cooked in a Swedish pancake pan. And the recipe - although allegedly from the pan manufacturer(?) is clearly non-Swedish. True Swedish pancakes have no leavening (baking soda/powder)or sugar or buttermilk.

Try this recipe, please, and you will see and taste the difference:

While pan is heating on a notch below medium heat: Combine flour, salt and milk until smooth, then mix in the eggs. Add in the melted butter and whisk thoroughly.
Lightly butter each pancake 'form' then: Pour 1 TABLESPOON batter into each and cook until top is not glossy, just shiny. Then flip carefully and cook the other side. Careful not to burn. The first batch is always the messiest so don't give up!

Hi These look lovely and the recipe is very similar to one I use (in Australia). I have one trick which makes making pancakes super quick on Sunday mornings...Which is to mix all the dry ingredients in a big batch (say 4 times the standard recipe) and store in an airtight container. Then when we want pancakes fast we add one cup of dry mix, 1 egg and just under a cop of milk (according to your desired batter thickness and a tablespoon of melted butter) . Batter made in under 3 minutes.

We made them this morning!

When the container is getting low - before I pop it back in the pantry I simply make a new batch of dry ingredients and top it up, ready for next time.