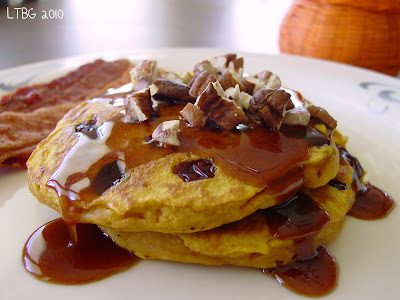 Whew! It has been a "whirlwind" weekend, as my father-in-law likes to say. I am worn out from Thanksgiving weekend. It's been nice to have some time off from work, but I've been a full time wife, cook and Christmas light decorator. I'm sure many of you can relate. It seems you cook and bake for 2 days straight, and it's all eaten up in 15 minutes, then you have and endless stack of dishes to wash! Luckily everyone helped out in that department. 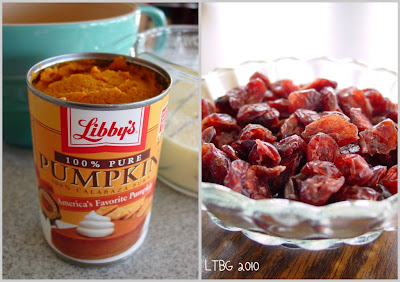 Did any of you brave the crowds this weekend and go shopping? I did not, unless you count going to three different Home Depot stores to exchange malfunctioning lit trees holiday shopping. ha ha! I was feeling a little under the weather this weekend so most of my time was spent at home. That also meant that I didn't do much cooking this weekend after Thanksgiving day. We're still eating leftover pie and sweet potato casserole and I'm not complaining about that. yum! 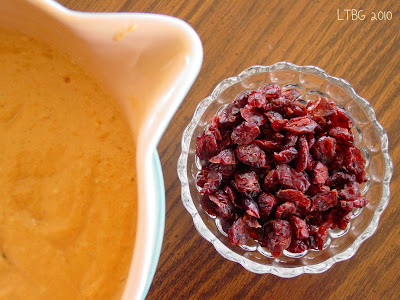 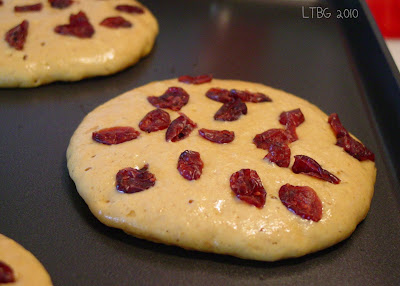 I made these pancakes a few weekends ago, but I forgot to share them with you all. shame on me. It's still November and pumpkin season, so consider this an early Christmas gift :-) I adapted these pumpkin pancakes from the ones I made last year with sweet potatoes. They're both equally delicious, it just depends on what you have on had or what you like. For added texture and holiday flair, I threw a handful of dried cranberries onto the batter as they were cooking. They're tender and moist and covered in cinnamon syrup. What could be better? 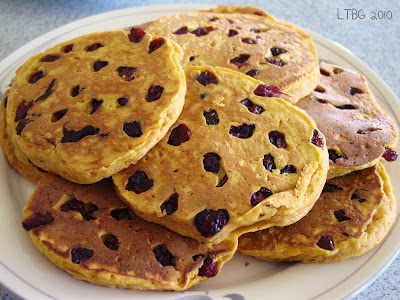 Add in the pumpkin puree and the sugars, stirring until combined.

Heat a skillet or griddle over medium heat. Using a 1/4 cup measuring cup to scoop the batter into the pan. Sprinkle the upside of the pancake batter with dried cranberries, cook until the underside is golden brown. Carefully flip the pancake and cook til golden.

In a small bowl or measuring cup, heat syrup in the microwave. Add cinnamon, stir til fully combined. Add butter and allow to melt. Stir. Serve. Syrup will thicken as it cools. 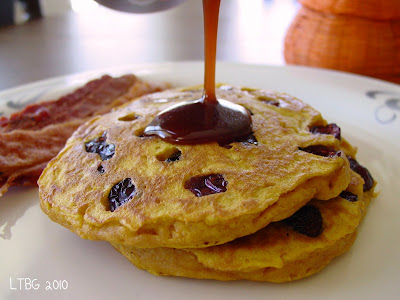 Love the cranberries in the pancakes. They must have tasted awesome! Thanks for sharing the recipe. I always look forward to adding pumpkin recipes to my repertoire.

Nothing could be better than a lovely stack of your pancakes Monica! Fabulous combo of flavors along with the scrumptious syrup...super YUM!

Take care of yourself Sweetie so that you don't get any sicker. :-)

I'd like those pancakes even it weren't November! Or fall for that matter. I have several cans of pumpkin on the shelf and there are always dried cranberries. It will be maple syrup for us since that's all my husband likes--no pancake syrup. Interesting what turns taste takes!!

That cinnamon sugar sounds amazing! That would be good on just about anything :)

Mmmm I can't wait to try these pumped up pancakes!

Those look delicious! I may have to try making sweet potato pancakes this week. I got sweet potatoes even though my boyfriend is not a fan, so I need to find a way to make them that will make him actually enjoy them! Is the possible? Not very sure. So I might just use them for baking.
I seriuosly cannot wait until the day that I cook my own Thanksgiving.

Sam loves craisins. I wonder if he'd go for them in his pancakes? I'll have to get Jim right on that! haha!

Sorry you weren't feeling great! I do understand the cooking, cleaning, shopping and decorating spree of the past few days. It is cold and rainy here today and I'd really just like to curl up under a blanket...but, I'm going to wrap packages instead.

Fabulous looking, and I love that syrup! Hope you're feeling better!

I did not do any shopping this past Friday....I try to stay away from the stores when they are that crowded. The pumpkin pancakes look sooo good. One of my favorites!

These look very yummy. The only shopping I did was at Costco so I could get my free cookbook.

These look so good! I bet they're good with chocolate chips too! And I love the idea of the cinnamon in the syrup. But my hubby is Canadian, so we HAVE to like maple syrup. :)

I ran around the living room like a crazy person decorating today, and Dude slept on the couch...FOR 3 HOURS! Men.

Now, those pancakes should be on some fancy-schmancy breakfast menu-yum!

Your cinnamon syrup sounds good. I've made Maria's (two peas in their pod)but yours seems easier and probably last longer.

I was out shopping the day after Thankgiving. I don't go for the deals as much as just to enjoy a day with my mom and sis and enter into the Christmas season. Sorry that you were sick :(
I am really really hoping I have a can of pumpkin in my pantry right now! My kids have been begging for pancakes for dinner the last few days and I think these would be perfect!

Mmmm, these are right up my alley - I wish I had everything around to make them for breakfast tomorrow but I just used the last of my Libby's :( Definitely bookmarking though!

This would be the perfect meal to make Christmas morning. YUM! I'm going to have to tell my mom about these since I'm always over there on Christmas since the Mr. is working.

I keep meaning to make pumpkin pancakes for one (the family wants nothing to do with the idea lol but I do!!!).
These look perfect!

I really like your pumpkin recipes! ( And all your blog! ) I have many of pumpkin puree from Halloween and we don't cook that a lot here.

We use fresh & frozen cranberries instead of dried cranberries in our pancake recipes. I think they add a delicious tartness to the pancake. Personally, I prefer tartness to sweetness, so that's what we do. I haven't done pumpkin-cranberry pancakes yet, but I will definitely try it!