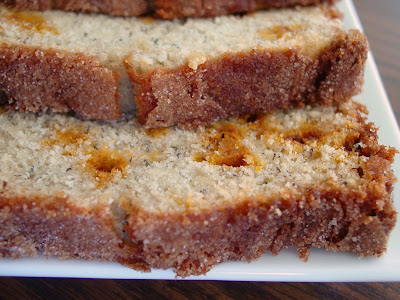 Once upon a time, I disliked banana bread. I mean, I ate it if it was the only thing around and I was desperate, but it was certainly not my first, second or tenth choice. ha! There's just something about concentrated banana flavor that turned me off. And artificial banana flavor, like banana taffy- double gag! But one day, Dawn of Vanilla Sugar turned that around for me. She shared a recipe on her blog that made me question my strong dislike for banana bread. Ya'll her recipe was GOOD! 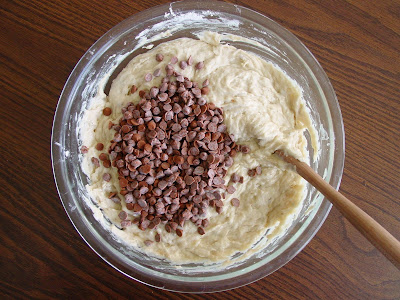 The original recipe is no longer on her blog for some reason, so I can't link back to that particular post, but I'm sure you'll find lots of other yummies over there. The first time I made this banana bread, I added mini chocolate chips and it was delicious. For something different, I added cinnamon chips and topped it with cinnamon sugar before baking. When it came out of the oven it was crackly and crunchy on top and soft and moist in the inside with the added pop of melty cinnamon chips. 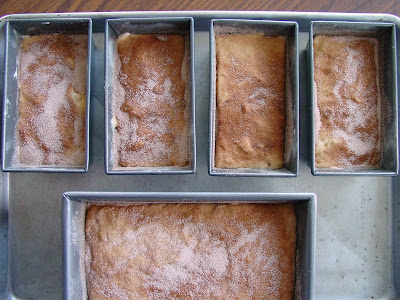 I doubled this recipe, made one large loaf and 4 smaller loaves to share with the neighbors. My thought was to try to make friends with the neighbors that we didn't know so well and really I don't think any of them really gave a flip. But at least I made the effort, which is more than I can say for them! Anyway, despite the lack of enthusiasm from my neighbors, I think you should make this bread. Don't feel compelled to add anything to this bread, it's just as delicious plain, but chopped nuts or a caramel swirl wouldn't hurt anything either. Trust me, this banana bread is perfection. 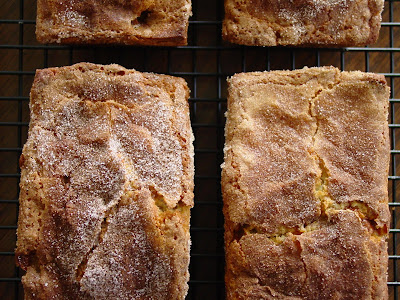 adapted from Mama Dip and HERE

Preheat oven to 350 degrees. In a large bowl with an electric mixer or a spoon, cream shortening and sugar together. Beat in eggs one at a time; then add mashed bananas, sour cream, and lemon juice.

Pour into greased and floured 9x5x3 loaf pan. Sprinkle with about 2 Tablespoons (use as much or as little as you want). Bake for 60 minutes.

NOTE: If your bread is getting too dark, loosely cover bread with foil. I did this for the last 15 minutes of baking time.

*Don't be tempted to use butter instead of shortening in this banana bread. It's what makes this recipe different. 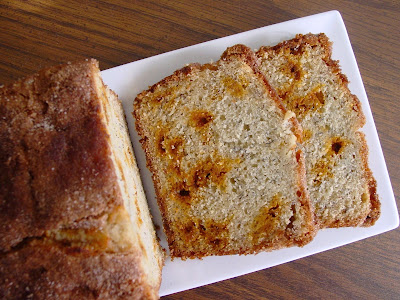 Oh and for the winners of the Finlandia Cheese giveaway... #23 Maria from Two Peas and Their Pod

#31 Leeann from Join The Gossip

Congrats ladies! Please email me with your addresses so I can send out your coupons for free Finlandia cheese!

Oh that looks so delicious!! I LOVE banana bread. I am with you and the horrid taste of artifical banana flavor. Where did you get the cinnamon chips???? I have been looking for them for about a year now. I saw a yummy recipe on someones cooking blog one day and I have been looking for them ever since.My markets dont seem to have them.
I absolutely LOVE your blog btw. :)

If I were your neighbor, you can bet I'd be appreciative to receive this banana bread--or anything for that matter!! I agree with you about not liking a real intense banana flavor. It's the mildness that I love in bananas. I haven't seen the cinnamon chips but will look for them.

LOL As soon as I saw the first pic pop up in my reader, I knew there were cinnamon chips in this recipe. What is with that color, Hersheys?? I'd get over my color issues pretty quickly to eat some of this bread though. Sounds totally yummy and I love the cracked and sparkly top.

You know I knew there was a reason that I bought that bag of Hershey's Cinnamon Chips a couple of weeks ago! - I will soooo be making this bread with that precious bag of CC's.

Wish I was one of your neighbors! - they must have loved getting a knock on the door with this lovely bread on the other side. :-)

p.s. Well, I got so excited over this recipe that I didn't realize that your neighbor's reactions to receiving a gift of this bread was very minimal....what the "flip" were they thinking!!!!!!!????? Gesh. I mean really.

I am so happy I won! Thanks so much. I will email you:)

YUM! Cinnamon chips are one of my fave ingredients! I wish they weren't seasonal!! Sorry about the lame neighbors -- wish I'd gotten their loaf instead :)

Yay!! Thansk for picking me. I am so excited to try some new cheese :)

I agree with the artificial banana taste, but I love banana bread. These pics are making me drool hehe!

CHEESE! Ah - I don't think I even entered, as I am new to your lovely blog. Someone wonderful (because I only read those kind of bogs - ha!) turned me onto to you! I have so much catching up to do.

I have some bananas just waiting to be made into something -- and this will be what they are going in to!! I too will pass on some loaves to friends (thanks for that idea ;-)) -- and do not worry if your neighbors don't appreciate fine baking. I have lived next to numerous people who just drop their jaw and look at me like an alien if I pop over with something. It's sad -- but all we can be is who we are, with no expectations -- I say that only to remind myself.

Someday I will find those cinnamon chips and it will be a happy happy day! Your bread looks yum!

Artificial banana bread flavor? I'm confused. Do some people use extract in their bread?

I LOVE banana bread and cinnamon but am not sure i'd like the two together. I'll have to give it a try though because your recipes are fabulous!

I'm so sad I didn't enter the cheese giveaway. I've never seen Findlandia cheese around here but last night I spotted it at my local store. go figure!

Oh that looks delicious!!! I wish I had a neighbor like you. I would be your best friend just so I could keep getting treats like that! Yummy!!!!

We actually like banana bread and I make it all the time because we always have leftover bananas! I've never tried those cinnamon chips...that would be a great addition!

I'm not a banana bread fan-I just don't like bananas-but the other three here love it. I will need to bookmark this one and make it when Hermit Crab comes home at Thanksgiving.

and are your neighbors on crack? They are missing out, not just on your food but your friendship. Their loss. You should move next door to me!

I love banana bread! (But I hate banana candy, too. Eyuck.) And with chocolate? I have seriously got to give this a try.

oh was this the mama dip's recipe? are you sure it's gone from my site?
the post was one of my first posts i ever posted and the photo was soooo bad; i had to take it down, it was scaring people. lol
but you know, you've asked me twice about this and dammit, it's time to re-do this and put a new post back up. thanks for the shout out darling.
in case you're wondering the orginial recipe is from mama dip's cookbook www.mamadips.com

Yummy! I love to bake bread and this looks amazing...now I need to find the cinnamon chips!

Thanks for sharing...I really enjoy your blog!

I was just looking at the very ripe bananas on my counter this morning and thinking, "I need a different banana bread recipe to try." Except I just looked for cinnamon chips at the store yesterday and didn't see any. Maybe I will try swirling some cinnamon sugar into the batter. Thanks for sharing this! It's just the inspiration I needed for my old bananas today!

That bread looks so good, I could eat it, lol!! But seriously, cinnamon and banana? It sounds divine!

Oh my - this looks amazing! I love the crunchy top and I am always looking for a new recipe to use for those ripe bananas.

OK, so one so glad you are now on the banana bread bus!!
Two the addition of cinnamon chips is amazing! I have never seen cinnamon chips...hmmm.

I am a huge fan of BB and have been making it since I was a teen, this one is completely different, I will have to give it a go next time I have some perfectly browned bananas! YUM!!

YUM! Love the tops on this AND it's the very first banana bread recipe that worked for me! I love this bread....

Sounds like you live on my street....I want to be your neighbor!

That bread looks delicious! I do love banana bread and would love to add in the cinnamon chips. I have been looking EVERYWHERE for them ever since I saw your cinnamon bread recipe a while ago, but I cannot find them anywhere here in Charleston! I will have to give this a try if I can ever find them! As well as your cinnamon bread!

Huh stuffy neighbours. I bet they will become a lot more appreciative once they have tasted it - look divine! I'm with you on the whole fake banana flavour - yuck! Can't stand orange flavour either but love the addition of fresh orange zest into things. Yum

Your neighbors must be crazy! If anyone made this for me I'd have to resist doing the "I'm not worthy" thing from Waynes World.

TOTALLY AWESOME! ... with my belief that Cinnamon is a healthy item to bake with - and then learning that it IS GREAT FOR DIABETICS, I have been making Cinnamon Chip cookies instead of chocolate chip for my parents for years. .. well we keep some at home too. Most of my baking is with wheat flour - so I as well have 'brown' cooking/diet! LOL

I am not sure who might read this- but I have found that I cannot live without my Cinnamon CHip cookies - so I order mine from Hershey - and though I live less then 30 minutes from them, they do not carry them in their 'store' but online they do. HOORAY!! I have a box- carries about 12 bags - and though you might not need 12 bags - its that time of year where the baking is happening!! Thank you for sharing.

I have sent batches to my friends in SC and CA - and getting requests for more!!! Thank you.