It's very rare that I make, eat, photograph and blog about a recipe all in the same day. In fact I've only done it about 3 times since I've been blogging. But this morning I made Banana Buns that I saw on No Onions a couple months back. All I can say is YUM! 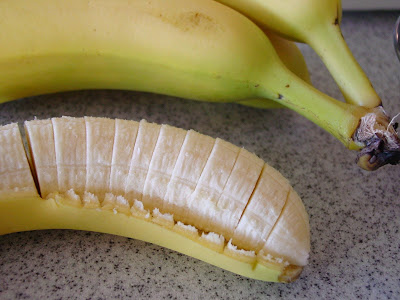 I didn't follow her recipe exactly, since it's more of a concept and you don't have to be so exact. 4 B's- Biscuits. Butter. Brown Sugar. Banana. I added a little cinnamon and chopped pecans then brushed the biscuits with a little more butter and a sprinkling of cinnamon sugar. I also used Grands Buttermilk biscuits rather than the smaller ones, but use what you like or have on hand. Oh and I sprayed the pan with non stick spray so they didn't stick.

The result was an upside down nutty, caramelly, banana bun perfect for lazy weekends and for company. The butter, brown sugar and cinnamon melted down and made a lovely syrup on the buns once turned out of the pan. The bananas got soft and the pecans were crunchy while the biscuit rose beautifully and was fluffy but sturdy enough to hold up all the goodies on top. They were like individual gooey banana breads. I loved these and look forward to making them again. Next time I might try them with blueberries or diced peaches.

Preheat oven to 350 degrees F. Spray your muffin tins and get ready to layer ingredients.

Place 1/2 Tablespoon or two of the 8 butter pats into each muffin cup. Sprinkle chopped pecans over the butter, then place 3-4 banana slices over the pecans. Sprinkle 1/2 teaspoon brown sugar and a pinch of cinnamon over bananas. Top with biscuit and press into muffin tin. Brush each biscuit with melted butter and sprinkle with cinnamon sugar.

Bake for 18 minutes or until golden and puffed. Allow to cool for a couple minutes before turning out onto a plate.

NOTE: The Grands biscuits are a little large but if you compress them with your hands around the edges of the biscuit as if you're shaping a patty it will fill the muffin tin perfectly. I like these as oppose to the smaller ones because they bake up taller and more muffin like.

One medium banana is enough for about 5 buns.

Wow that is so creative! You always have such wonderful ideas, especially for breakfast which is my favorite meal=) I just bought some bananas so this would be perfect!

All I can say is "yum"! Wow! Look at all that melty gooey sugary goodness! You must have loved this to make and blog it on the same day. I do that rarely, now that I caught on that my readers have no clue what I just ate! D'oh! Oh, and great call on the pecans and extra cinnamon. That's my girl!

I am just DYING for one of these right now!!!

I posted a recipe my kids ate today too (and that doesn't happen often for me either!). This looks really good. I wish I had some bananas right now :)

Oh yum...and easy too! I'm keeping this one.

Wow these look ridiculously fantastic! Thanks for sharing.

I rarely ever eat and blog on the same day so I share your amazement with yourself!

these look SUPER delicious! ooey-gooey banana sugariness. haha that's what I will call them when I make them :)
Mini Baker

What a great idea! I am going to try these soon

Hi Monica!
Everything looks SO DELICIOUS!

I love the bananas in this recipe! Genius!

You had me at banana buns! Although no one in my house would eat them, I will just sit here and admire them from afar!

Oh my goodness...that is amazing! I am going to make these but don't think I've heard of the brand 'Grand's'. Is there something comparable?

My hubby would LOVE these, I can't wait to give them a try! :)

I need to try these for the family. They love banana bread and desserts so I know they would love these.

Oh gosh, those look fabulous! Makes me want to eat my screen! xxoo

Wow these look fabulous, lick your fingers good. I love how the banana is all soft and gooey and mixed with the nuts and syrup, just divine.

oh wow. these look like the perfect weekend breakfast.

I am definitely trying these. Fantastic idea Monica and they look delicious!!!! You know I just love bananas!

Oh, these look sooo yummy! This recipe is going in my to bake folder!

So glad you liked them! I envy your fantastic lighting as well. Your photos are gorgeous.

Printed and filed into my recipe binder at the very front!

These look so good. You take such beautiful pictures too. It's fun just scrolling through your blog looking at all of them!

I love how easy these are with the Grands! I love the banana twist and the gooey deliciousness is making my mouth water!

Butter. Bananas. Biscuits. My 3 favorite things in one recipe? I know what I'm making this weekend! :D

Wow.
These are real beauties!!

I like recipes like this one that make me think about using things in different ways. I would NEVER have thought to do anything other than follow the instructions on the can of biscuits!

YOU KNOW this is going on my list of things to try soon as I love to use banans in my baking!! Looks incredible Monica!

You make everything look delectable! even bananas, which isn't my favorite fruit. I bet I could sub in apples. YUMMY!

Oh! These banana buns sure look so yummie...very nice presentation!

No, no, no! These are quite near perfection. So,I don't want to hear any talk of changing from the bananas. :)

I can't wait to give these a try! I'm willing to bet these will make three little people in my house very happy! Almost missed these, too. Wait a minute....you wouldn't have let me, would you? That would have been kinda mean. LOL!
~ingrid

Hello Friends,
Are you interested in quality blogging.Do blogging at mysite.We welcoming people like you.It is 100% free.

And also you can easily publish it to our community members.And don't forget to invite others to join.

Oh...my...goodness! These look easy and they remind me of Bananas Foster! These will make an appearance it our brunch table very, very soon!

I made these yesterday for breakfast and everyone demanded I make them again! Thanks for such a fantastic recipe.

Just wanted to say that this looks absolutely amazing! Thanks for sharing it! :) I look forward to your Christmas baking!