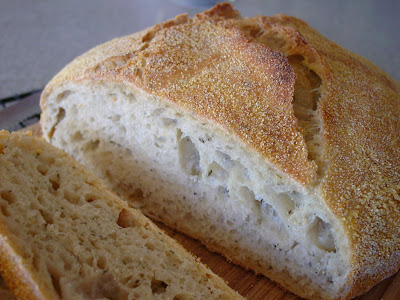 I found a recipe for no-knead bread in the Food section of my local paper. I clipped it and stuck it in a box that contained a thousand other clippings. Weeks passed. Months passed. I was finally ready to make the bread but I didn't read the instructions prior to deciding I wanted to make it. So I was a bit bummed when I realized it was going to take s.e.v.e.r.a.l hours before I actually had an edible loaf. I threw it back in the box. 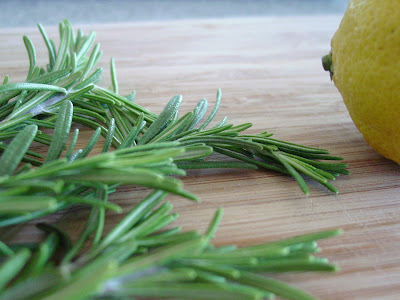 Then a few weeks ago, while searching the Williams-Sonoma (I love them!) website I came a cross the recipe for no-knead bread again. It was a sign. I set out to make it. Only this version was scented with rosemary and lemon zest. Even better. 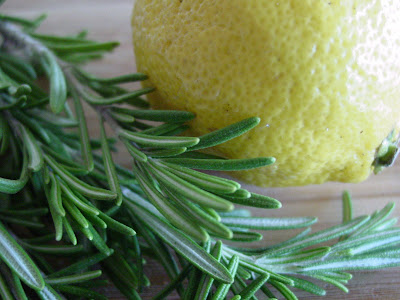 I prepared well in advance for this bread. I was nervous about the proofing/rising time of the dough. I didn't want it to "over proof" if that's such a thing. I allowed approximately 20-22 hours from start to finish to make this bread and let it rise overnight for a full 18 hours. Finally when the time was right, I pulled my dutch oven out from the cabinet and placed it into the 450 degree oven for well over 30 minutes. Then I went and took a short nap... 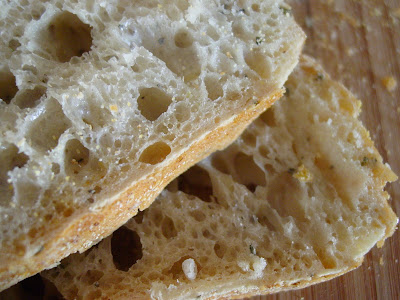 When I came back into the kitchen it smelled a little burnt. I thought it was because my oven is dirty and it was turned up pretty high. I blamed the smell on the burning grease. I went to take the pot out of the oven and I saw smoke coming out from under the lid. I pulled the top off and there was a stack of white kitchen towels in the pot that had been baking in the oven for 40 minutes! I'm surprised I didn't burn the house done. Because the lid was on the pot, they only got a little toasty. Let's just say they are no longer white-more like toasted marshmallow. You may want to skip this step :-) 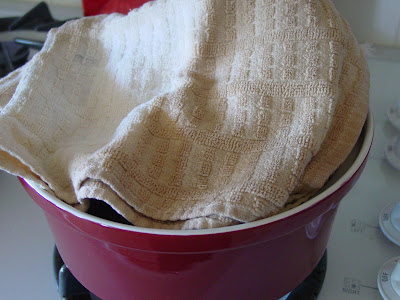 My husband and in-laws loved it, especially slathered with salted butter. I wasn't sure if my hubby would though, because he doesn't like really crusty bread. But he ate most of this loaf by himself and he requested it with every meal. I sliced it all up and put it in the freezer and reheated a couple slices at a time. It's crusty and cornmeal-y on the outside but chewy and airy on the inside- much like ciabatta bread. And the lemon zest and rosemary give it a nice perfume without being overwhelming. The only alteration I would make next time would be to add a bit more salt. Other than that, it was WONDERful. 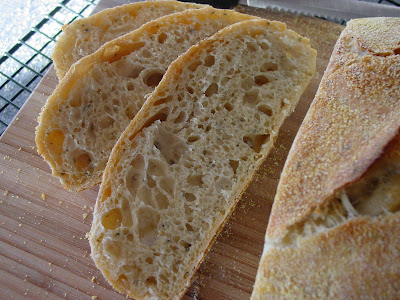 In a large bowl, combine the flour, yeast, salt, rosemary and zest. Add 1 5/8 cups water and stir until blended; the dough will be shaggy and very sticky. Cover the bowl with plastic wrap. Let the dough rest at warm room temperature (about 70°F) until the surface is dotted with bubbles, 12 to 18 hours.

Place the dough on a lightly floured work surface. Sprinkle the dough with a little flour and fold the dough over onto itself once or twice. Cover loosely with plastic wrap and let rest for 15 minutes. 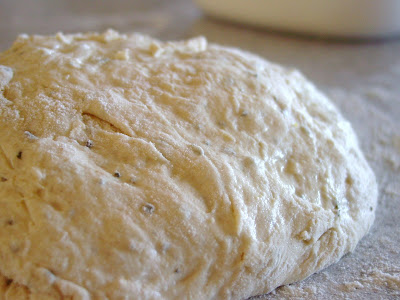 Using just enough flour to keep the dough from sticking to the work surface or your fingers, gently and quickly shape the dough into a ball. Generously coat a cotton towel, preferably a flour sack towel (not terry cloth), with cornmeal. Put the dough, seam side down, on the towel and dust with more flour or cornmeal. Cover with another cotton towel and let rise until the dough is more than double in size and does not readily spring back when poked with a finger, about 2 hours. 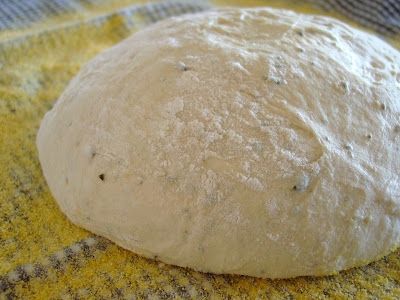 Carefully remove the pot from the oven. Slide your hand under the towel and turn the dough over, seam side up, into the pot; it may look like a mess, but that is OK. Shake the pan once or twice if the dough is unevenly distributed; it will straighten out as it bakes. Cover with the lid and bake for 30 minutes. Uncover and continue baking until the loaf is browned, 15 to 30 minutes more. 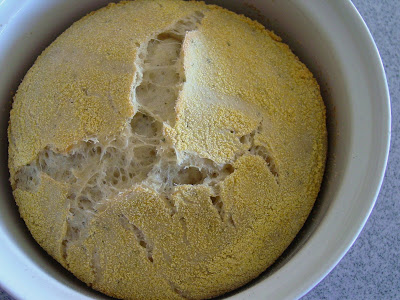 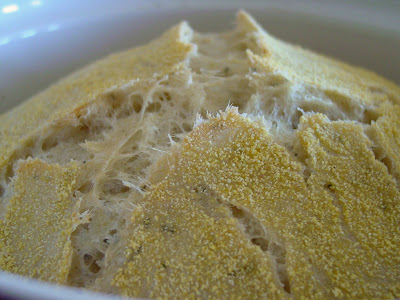 Transfer the pot to a wire rack and let cool for 10 minutes. Using oven mitts, turn the pot on its side and gently turn the bread; it will release easily. Makes one 1 1/2-lb. loaf. 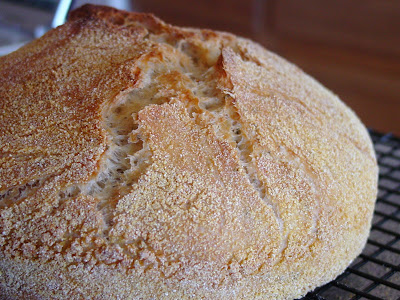 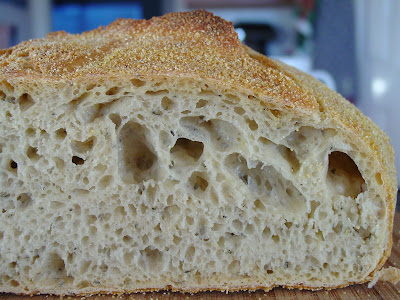 OMG, I'm cracking up about the towels! That is something I would do:) This looks really good!

It looks so gorgeous, Monica. I must be the only one who hasn't tried this heavenly stuff. I really have got to get off my lazy butt and just do it. And since YOU gave it a big thumbs up, I have no excue, none. Thanks, Im going to do this.

Now that is a loaf of bread! It looks amazing! I love the rosemary and lemon too! Great job!

That's gorgeous. I wanna make bread!!!! I'm gonna have to work on getting up my nerve to give it a try.

Even though your kitchen towels were roasted they still looked in good shape.
~ingrid

Bread is one of those things I just have trouble with. That looks great though. I have refrigerator yeast rolls rising right now and I'm hoping those turn out half as good.

You know I think I'm the only one that hasn't tried this no-knead bread craze. I like the way you explain though, well, minus the towel. LOL
The thyme sounds soooo good with salty butter.

OMG! I'm glad you didn't burn the house down too haha! That sounds like something I would've done, actually...one time I left the blender, plastic parts and all, on top of the stove (and it was on). The blender melted and the smoke alarm when off...this was when the hubby and I were dating...and he still married me :D!

That looks and sounds magnificent, without the towels of course :O

However that is entirely too much work for me, and I'm without dutch oven anyway

I love those close-ups of the lemon and rosemary. What a tasty bread!

Your bread is beautiful! I love no-knead bread, I'll often add walnuts or olives, I might borrow your lemon zest/herb idea :).

I've made bread for years but I've never been able to achieve a bread with this lucious hole-y texture. Thank you so much for the recipe. I will be trying this one right away!

Wow this recipe looks absolutely delish! I can just smell the bread already ... oh boy, this is dangerous ;) wonderful blog, and absolutely beautiful step by step photos. So helpful, and gorgeous for your readers. Keep doing what you do, from one food blogger to another xx